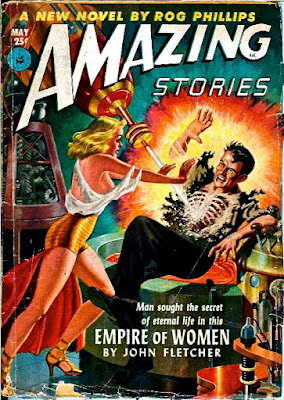 When last we saw Dick Ridpath in Larry Winchester’s Genesee Cream Ale Award-winning epic, he was narrowly avoiding calamity in the boudoir of Hope, the beautiful daughter of the vile rancher Big Jake Johnstone. But he’s not safe home yet, not by a long shot, not while Marlene (the sultry partner of the international assassin Hans Grupler) is on the premises...

Outside Hope’s room Dick stood still for a moment, breathed deeply, and then glanced down. In the insane rioting of his soul he had not quite realized the embarrassing extent of his erection.

There was a sound, as of an approaching panther. He turned and saw Marlene in a short red terrycloth robe, carrying a hairbrush and a towel and apparently headed toward the bathroom.

He stood to one side to give her plenty of room to pass, but she stopped as she came abreast of him.

“I certainly hope so,” said Dick.

“You must have taken a very hot shower,” she said. “Still you are schwitzing.”

She put out a red-nailed finger, laid it on his chest and then showed him a bead of sweat quivering on her perfectly still fingertip. She smiled, put out her tongue and put the bead of sweat on it. Then she drew the tongue back in between her full red lips and swallowed.

Dick started to turn to go and she stepped closer to him, pressing her bosom against him.

Dick made to step away again and she pressed him against the wall. She let the towel over her left arm drop and she reached under his kimono and put her hand on him. The stiff sharp bristles of the brush in her right hand pressed through the silk of his robe against his chest.

“We could go together,” she said. “I caught your wibration at the table today.”

Her left hand worked expertly down below while her strangely strong right hand and hard but soft torso kept him pinned against the wall.

Dick reached down, grabbed her left wrist and pulled it slowly but firmly out of the fold of his kimono.

She pressed herself harder against him.

“And you have a big one. Grupler has a tiny one and he does not satisfy me. You could maybe satisfy me.”

“Your wife could be eliminated too.”

Dick heard Hope’s door open. He looked over and there she was, looking at them.

He pushed Marlene away and her robe came open, revealing her quite remarkable breasts. She stood there looking coolly from Dick to Hope, making no effort to close her robe.

Dick made a sort of foolish shrug in Hope’s direction and then headed back down the corridor, following that part of himself that Marlene had so expertly aroused.

(Go here for our next amazing chapter. An up-to-date listing of links to other episodes of Larry Winchester’s A Town Called Disdain appears on the right hand side of this page.)

Succubi or just two teasers in one hallway?

But it hurts so good.

ondine you forgot the k

Thanks so much to subjecting me to this pain.. I got you a spot in hell

"Her left land worked expertly down"

"Her left land worked expertly down"

Oops! Thanks for the typo-spot!