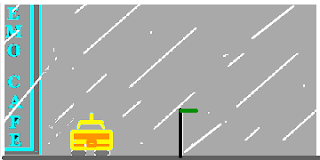 Gerry decided to resign himself to Addison’s intrusion on his tête-à-tête with Araminta.

The sad fact was that Addison was simply impregnable to hints, and he had solidified his position by shoving himself up against the bar in the very narrow space between where Gerry and Araminta sat on their bar stools.

“My friends,” said Addison, “I truly feel that this coming year will be the year of great change – yes, momentous change – at least for myself. My novel proceeds apace, thank you very much, and, as soon as it is published, then, at last, at long last, I shall take my place at the table of the great feast of life.”

“So you think your book’s going to be a big success?” said Araminta, quite deadpan.

“Yes, Araminta,” said Addison, “I do. Oh, perhaps not a top bestseller, but most certainly a succès d’estime.”

“Precisely,” said Addison. “I should not be surprised if next year Sixguns to El Paso makes all the most respected end-of-the-year top-ten lists. But.”

“But?” said Araminta, while Gerry said nothing, for the very good reason that he was paying not the least bit of attention to a word Addison said.

“But – I don’t want either of you to think that I shall forget my old friends,” said Addison.

“I would never think that,” said Araminta.

“And, perhaps,” said Addison, “perhaps I say, I just might find an opportunity to drop a word or two to my publisher regarding the both of you.”

“You have a publisher?” asked Araminta.

“Oh, no, not as yet; after all, I’ve only finished two hundred and eighty-four pages of what I envision as a work of possibly two or even three thousand typed pages. But as soon as I finish it I’ll drop it off at a suitable house – I have my eye on Smythe & Son – and I’m sure it will be accepted at once.”

“I have no doubt,” said Araminta.

“Yes, and so I just might be able to put in a good word for your novel, Araminta, and also, possibly, even for your little volume of philosophical observations, Gerry. Gerry?”

“I said I might put in a good word for your book with my publisher.”

“You have a publisher?”

“No, as I was just saying to Araminta, I don’t have a publisher quite as yet per se, but when I do I’ll see if I can get them to consider your and Araminta’s books.”

“Oh, thanks,” said Gerry. “I don’t know about Araminta’s novel, but I’m sure my book will need all the help it can get.”

“Yes,” said Addison, “sadly the market for books of philosophy is not quite bullish shall we say. But, rest assured, if I can crack open a door for you, and for dear Araminta, I shall.”

“Another round here?” said the bartender, and indeed all of our friends’ glasses were empty.

“Yes, please,” said Gerry, and he somehow wound up paying for another round, Rheingolds and Creams of Kentucky for the two gentlemen, a house red wine and a grappa for Araminta.

“To the encroaching new year,” said Addison, raising his fresh shot. “May this one not be like all its predecessors, fraught with failure, with poverty and humiliation, no, but resounding with triumph both artistic, and, to an acceptable extent, commercial.”

“And now I must tell you, my friends, something else which I have never told anyone, not even my shrink. This talk of the looming year has dislodged a certain memory from the dark vault where it has lain hidden away for some half-dozen grey and lost years. It is a memory that serves as a coda to the incident I told you of earlier, in the men’s room of that low tavern the Sow’s Belly, in Fayetteville, North Carolina, when I was doing my grim wartime service in the parachute factory.” Addison wet his whistle with a slug of Rheingold, and then continued. “It was New Year’s Eve, and of course I was at the bar and well into my cups, attempting and failing quite miserably to drown my sorrows, when who should shove in next to me but that huge sergeant I told you about.”

“The one who buggered you in the men’s room?” said Araminta.

“Well, I suppose ‘dry buggered’ might be the apt phrase, but, yes, the same. And this chap clapped me on the shoulder and I was terrified that he was going to drag me into the lavatory by main force for a vigorous repeat performance. But instead he just said, ‘Happy New Year, pal,’ and he insisted on buying me a drink. ‘Happy New Year.’ He didn’t recognize me, you see. Had no idea it was I whom he had heaved and ground his sodden corporeal host against as I was standing mid-micturition at the urinal only the previous weekend.”

“Did you accept the drink?” asked Araminta.

“Of course I did,” said Addison.

Araminta had nothing to say to this, or nothing that she chose to say. Gerry also said nothing, but then he had stopped listening again.

The bar around them roared with laughter, shouting and chatter, the jukebox music played, an old tune from the war years, “The Boogie Woogie Bugle Boy of Company B”.

“I recall that we had a pleasant conversation, of sorts,” said Addison. “And then he wished me a Happy New Year once more and staggered off into the drunken crowd. After that I saw him a few more times at the Sow’s Belly, but we never spoke again. And then I stopped seeing him. I suppose his unit shipped out. Oh, how these memories well up in Proustian profusion! But, you see, here’s the thing.”

“What’s the thing?” said Araminta, who was still listening, if not raptly.

“What was his name, this sergeant?” asked Araminta.

“For those few brief minutes of drunken fellowship I thought that perhaps I had made a friend.”

“A friend,” said Araminta. “With the man who tried to bugger you while you were urinating.”

“But he was drunk, my dear Araminta. A drunken soldier, far from his home, soon perhaps to be sent to war. We must not be too judgmental.”

Another old song had come on the jukebox, it was Frank Sinatra with Tommy Dorsey, “Fools Rush In”…

“Perhaps,” said Addison, after a pause, “next year, in the new New Year, that sergeant, now a civilian, a bit paunchy now, his hairline receding, perhaps he will idly pick up Sixguns to El Paso in his local bookshop, and, turning it over and seeing the author’s photograph, he will recognize that lonely young fellow he spoke with at the bar of the Sow’s Belly, in Fayetteville, North Carolina, that New Year’s Eve of 1944, yes, he will recognize him, and say, ‘Hey, I once spoke with that guy. And, gee, now he’s a famous author. I wonder if he remembers me?’”

Araminta thought this scenario highly unlikely, but she said nothing.

Gerry still wasn’t paying even an iota of attention and so he also said nothing.

And, for a minute at least, even Addison said nothing, dreaming of new years past and to come, as fools rushed in, where wise men never go…

{Kindly go here to read the “adult comix” version in A Flophouse Is Not a Home, illustrated by the illustrious rhoda penmarq…}
Posted by Dan Leo at 9:57:00 AM