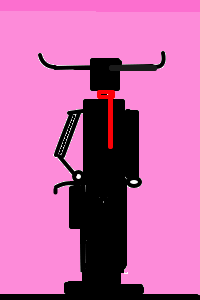 Addison came right up to where Gerry “the Brain” Goldsmith sat on his stool.

“Hey, Addison,” said Gilbey, still standing there, and he tugged on Addison’s sleeve.

“Here’s your bock, Gilbey,” said Bob, and he laid a glass down in front of Gilbey.

“Thanks, Bob,” said Gilbey, and he picked up the glass and drank half of it down. “What was I sayin’?” he said.

“Does it matter?” said Addison.

“Prolly not, Addison, prolly not. Oh, yeah, now I remember. I seen the Devil.”

“Yeah. It was something, Addison.”

“Um, how about a bock, Addison?” said Gerry.

“You mean you’re offering to buy me one?”

Addison took pause. Gerry had only ever bought him a drink once, as far as he could recall. But then, to be fair, that was one more drink than Addison had ever bought Gerry.

Bob was still standing there, watching the show, so Gerry said, “Let me get Addison a glass of bock, too, Bob.”

“Is that an imperial pint you’re drinking there?” said Addison.

“Doesn’t the bock get flat when you drink it out of such a large receptacle?”

“Not if you drink it fast enough,” said Gerry, “but if you would prefer just a glass –”

“I think I should like to try one of those imperial pints,” said Addison.

“I suppose you’re just taking a brief break from reading my book?”

Gerry had been gulping his bock, but now he lowered the big glass.

“You go back and finish it.”

“Yes, precisely – just wanted to wet my whistle a bit, you know –”

“Yes, of course,” said Addison. “Because I really would like it back by tomorrow morning.”

“You see I really must continue the work while the flow of inspiration yet gushes from the hidden wellsprings of the imagination. Heh heh. And in fact the book is so complex, so multi-layered, that I need continually to check back over the completed pages, just to make absolutely sure there are no errors of continuity.”

“For instance, you know Buck?”

“Imagine my dismay when I suddenly discovered that from page 97 to page 198, I was calling him Chuck Thaxter.”

“Why were you doing that?”

“Because I forgot what his name was. And that’s why I always have to have my completed pages at hand when I’m writing new pages. Also, consider my consternation when I established that he had blond hair, and then next thing you know I mentioned his ‘raven black’ hair.”

“It wouldn’t be so funny if I hadn’t caught the error.”

“So if you find any of these sorts of errata, please let me know.”

“I’d appreciate it if you wouldn’t mark up the typescript, but perhaps you might keep a separate notebook where you could write down any of the more blatant errors.”

Bob was standing there again, and now he put down the imperial pint of bock he had been holding.

“Oh. Thank you,” said Addison, and he took the big 20-ounce glass in both his hands and raised it to his lips.

Gerry quickly pulled a dollar bill out of his trousers and laid it on top of the other dollar he had lying on the bar.

“Let me get this straight,” said Bob. “Addison is writing a book, and the Brain here is reading it?”

“Is this that critical study Addison was supposed to be writing?”

“In point of fact, Bob,” said Addison, “I have set aside for the nonce my study of trends in 20th century literary criticism, and I am now writing a novel.”

Addison had drunk about one third of the free imperial pint, and now he put the glass on the bar.

“Yes. But I prefer to think of it not so much as a ‘western novel’ per se, but rather shall we say a sweeping epic in the Homeric tradition – a prose epic, but an epic nonetheless.”

“And I just wanted Gerry to let me know if he thinks I’m on the right path with the book.”

And then he started to turn away.

Bob looked at him over his shoulder.

“That’s okay, Brain. That round’s on the house.”

And he walked away.

“That was odd,” said Addison. “Why did Bob give us a round?”

“Drink up, Gilbey,” said Gerry, “and I’ll buy you one of these imperial pints.”

“Oh, boy,” said Gilbey, and he quickly finished off his glass of bock. “I ain’t never had one of them imperial pints before.”

Addison suspected he knew what Gilbey was about to say, but Gilbey was an idiot. What did Gilbey know? The fellow had probably never read a novel in his life. Addison raised his big glass and drank deeply. Maybe, since Bob had given them this round, maybe Gerry would offer to buy him another imperial pint.

{Please go here to read the “adult comix” version in A Flophouse Is Not a Home, profusely illustrated by rhoda penmarq…}
Posted by Dan Leo at 7:34:00 AM