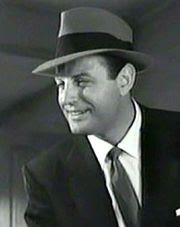 Brad Dexter starred in this Phil Leotardo-helmed series as crooked Philly police detective Lt. Max Kohlberg. Each episode featured Max getting over with some fresh outlandish scheme, and then losing all his profits through drunkenness, gambling or some other low vice: stealing heroin from the Mafia and selling it to the Irish mob (then leaving his share in a barroom urinal); knocking over the US Mint (then blowing the swag at the Atlantic City Racetrack); robbing guns from an armory and peddling them to Communist South American revolutionaries (a Parker Hotel hooker grabs the loot from that one); etc.

Featuring Nipsey Russell, Tommy Sands and Myron McCormick as Kohlberg’s fellow detectives-in-crime, and the lovely Miss Gloria Grahame as the long-suffering Mrs. Kohlberg. With a jazzy theme from Henry Mancini.

Sadly cancelled after only six episodes.

(Turn to the right hand side of this page for a complete listing of other Great Lost TV Shows.)
Posted by Dan Leo at 3:01:00 AM

Do you have any evidence of this "sadley cancelled" series? If not yer a clown, you know like a circus performer, you amuse me. So go get yer shoe-shine-box and entertain me some more.

Oh, there must be something somewhere else on the internets about such a great if short-lived series as "Kohlberg!"

As for Phil Leotardo this Philly native created and wrote and directed for many fine series, some of which we will highlight in future posts, e.g. "The Pep Boys Showcase"; "The Howard Johnson's Variety Hour Starring Ed Hurst"; "The McGurks of 65th Avenue"; and "The Dane Clark Theatre Presents".

It really is a shame how the Corporate Apparatchiks are so quick with a trigger-finger to cancel promising shows. Thinks of all the great shows we have missed out on - 'Man Vs. Beast', 'Animal Cops - Houston' (featuring the silky pipes of Marvin Pontiac himself), and 'Wonderfalls'. Aaah, Caroline Dhavernas....

Y'know, I had to look up "Wonderfalls" (never having heard of it), and that sounds like a really cool show. Thanks for the heads up, Pierce. It's now on my DVD-rental list.