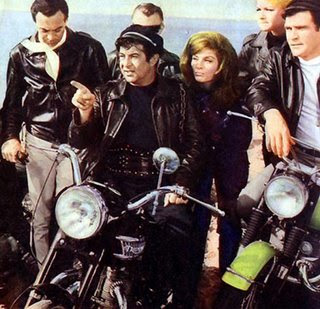 (Click here for our previous episode, or go here to return to the beginning of our Schaefer Award-winning serialization of this uncut “director’s version” of Larry Winchester’s long-out-of-print epic. “Makes Moby-Dick look like a guppy.” -- Harold Bloom)
Come with us to the environs of the wretched town of Disdain, New Mexico, in that momentous September of 1969...

Our heroes the (recently discharged young soldier Harvey and the mysterious and beautiful couple Dick and Daphne Ridpath) have finally set out on horseback from the ranch of the blowhard rancher Big Jake Johnstone.

Little do they know that they are being spied upon by Moloch, the former Oxford don who commands the vile motorcycle gang called the Motorpsychos. (Two nights before Dick shot and killed one of Moloch’s men in self-defense, and humbled Moloch himself before his men...)

Moloch adjusted the telescope and saw them quite clearly cantering down the road from the ranch.

He stood behind a large crucifixion-thorn bush, and behind him on the mesa sat the Motorpsychos on their hogs.

Testicle tapped him on the shoulder.

Moloch put down the glass and fixed Testicle coldly with his one good eye.

They looked at each other and Moloch considered the possibilities:

Throw the swine into the thorns of the bush.

Smash him in the face with the butt of his knife.

Drive the knife’s blade into his fat gut.

Or let it pass.

He saw the pathetic fear in Testicle’s eyes and, suddenly, Moloch was appeased. The acknowledgment of terror was enough. Enough for now. He turned away and raised the glass again.

“Is that their names?”

Moloch gave him another cold stare.

“Or -- whatever you think we should do.”

He turned and raised the telescope again.

His immediate reason for saying this was simply to put this arsewipe Testicle in his place. But something else inclined him to forestall the pleasure of wreaking a very nasty vengeance on these people. As much as he hated to think, he felt the need to think, to brood. Upon that man who had so humiliated him.

“Sometimes my dear Testicle you will find that if it were done when ‘tis done, then ‘twere well it were not done quickly.”

Moloch shut the scope up and put it back in its case.

“Come, let us find some teenagers and sell them hard drugs.”

(Click here for our next spine-tingling chapter. Or, kindly turn to the right hand side of this page for links to other episodes of Larry Winchester’s A Town Called Disdain, and to appreciations of many of his fine motion pictures. Coming soon to a theatre near you, the fully-restored director’s cut of Larry’s long-lost biopic from 1965, Private Proust, starring Jean-Pierre Léaud and Françoise Hardy, with original songs by Serge Gainsbourg.)
Posted by Dan Leo at 1:26:00 AM

Moloch is an original. He's someone I wish I knew in real life, although that's luckily impossible.
Still, if it were possible, I'd love to sit at his feet and listen to his philosophy of life. It wouldn't feel too weird, I think. When I ask serious questions of certain people, they occasionally react as if my audacity deserves grisly punishment.

Kathleen, I think you have a soft spot for Bad Boys!

I intended to compose you the little word so as to thank you so much the moment again relating to the beautiful advice you've shown here. It is really unbelievably open-handed with you giving freely exactly what a lot of folks would've offered as an e-book in making some dough for their own end, principally seeing that you could possibly have done it if you ever wanted. These tips in addition worked to provide a fantastic way to be sure that other people have the same eagerness the same as my own to find out somewhat more in terms of this condition. I am certain there are lots of more enjoyable instances up front for individuals that discover your forum post.