“Someone Is Murdering the Men of Wheeler’s Corners” 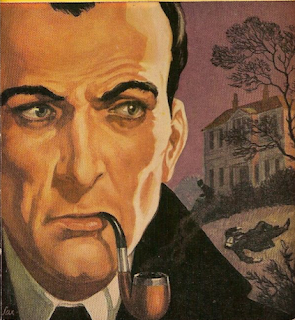 Someone was murdering the men of Wheeler’s Corners, one by one. First it was the mayor, Big Joe Gibbs, who was also the owner of the lumber mill. Then a month later it was Cal Burrowes, the lawyer. Six weeks after that Reverend McIntyre was shot in the back of the head while he was trimming and watering his roses early one morning. Mrs. McIntyre heard the shot but thought it was just a car backfiring, and so she didn’t find the reverend until a quarter of an hour later when she called him to breakfast and he didn’t come in. Five weeks after that Sheriff Boone was picked off as he was taking his evening stroll along Main Street. Some people said the shot came from up the hill, but nobody knew for sure.

The state police sent a man down a few days later, and the second night he was in town he got a bullet in the temple while he was driving over the Crippled Creek Bridge.

The next night Fred Baxter held a meeting in his store.

“Fellas, we gotta do somethin’, afore every man jack in this town winds up with a bullet in his head.”

“What the heck we gonna do, Fred?” said Willie Perkins, the grocery man.

“I’m packing up and gettin’ out,” said Red Durst, the dairy man. “I ain’t sitting around just wondering if I’m next. That ain’t no way to live.”

“I got an idea,” said Chester Higgins, who had never worked a day in his life and lived with his widowed mother and four spinster sisters.

“Oh, great, Chester’s got an idea,” said Bert Pope, who lived with his widower father and worked in the glove factory.

“Now just hear me out,” said Chester. “I been reading a book I got from the lending library, and I think there’s a man who can find this murderer. He’s one of them detective fellers.”

“You mean like a private detective?” said Mr. Moody, the undertaker.

“Yes, sir,” said Chester. “And the thing is, if he thinks a case is inneresting, money is no object, so we could probably hire him cheap.”

“That he does,” said Chester. “But maybe if we all chip in for his aeroplane fare he’ll fly over, on accounta this case is so inneresting.”

Everybody was quiet for a moment, and then Fred Baxter said, “You got this feller’s address, Chester?”

“I sure do,” said Chester, and he took out a matchbook, opened it up and read what he had written inside it: “221B Baker Street, London, England.”


– Someone Is Murdering the Men of Wheeler’s Corners, by Horace P. Sternwall; a Hi-Quality Books paperback original, 1951; one printing, never republished.