"The Ballad of Barton Browne" 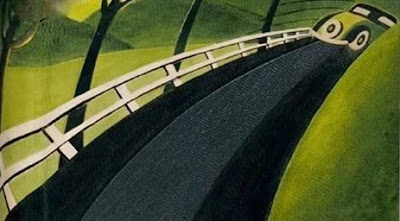 Barton Browne prided himself on being a “health nut”, and so you can well imagine his disappointment when one evening his car ran off the road in a “frequent accident area” and smashed into a pine tree.

What had once been a well-kept figure of a young man was now a mass of broken and fractured bones, and it was six months before he left the hospital, and even then it was with a walking stick, and a severe limp.

Barton had taken out an excellent insurance plan, and he figured that if he invested his money wisely he would never have to work again, which was just as well, because his physical condition would never have allowed him to return to his job as a door-to-door vacuum-cleaner salesman. He had excelled at his work, winning “Salesman of the Year” bonuses five out of the past seven years, and his former employers appreciated his service sufficiently to grant him a modest pension for life, even though they were not obliged to do so.

Barton decided to use his pension money for living expenses, and his insurance money he invested in an array of blue-chip stocks. His Lower East Side apartment was on the first floor, and so he had no demanding reason to move into an elevator building.

He got to know his neighborhood, limping around with his malacca walking stick. Before the accident his plan was to live here only until he had saved up the money for one of those new homes in the suburbs. This imaginary home – one of the fashionable “ranch” styles – was always meant in Barton’s dreams to be shared with a wife; a wife, in baseball terms, “to be named later”. But who would ever marry a cripple, a broken man who could barely hobble around with his cane, who could not even lift a telephone book with one hand? No, Barton resigned himself to a long retirement of celibacy.

But he could look. And look he did, at the girls and women he saw in the street, on the bus and in the parks, and on the silver screen in the movies.

Barton had never been much of a drinker, and he still wasn’t, but he had taken to stopping into a tavern at Bleecker and the Bowery called Bob’s Bowery Bar.

The eponymous proprietor brewed his own bock beer in the basement of his establishment, and Barton was so taken by the novelty of this old-fashioned practice that he made the house bock his regular tipple.

He would sit at the bar nursing the dark, not-quite-cold, barely carbonated but rich and full-flavored beer, and out of the corner of his eye he would admire the waitress, Janet.

He was not alone in this admiration. All the bums in this bar (and to be honest, most of them really did seem to be bums), all of them worshipped Janet, an auburn-haired, strong-looking Irish girl who took care of her kid brother and sister, her parents having died some years before, of cancer (the mother) and alcoholism (the father).

Very gradually, over the course of dozens of slow afternoons, Barton became “friendly” with Janet, in that way that “regulars” in a bar or café become friendly with the staff.

When Barton came into to the bar, usually at around 4pm, he would say hello to Janet.

“Good afternoon, Janet. How are you today?”

“Not bad, Barton, how are you today?”

“Could be worse, Janet!”

And that was about as far as their friendship went, but it meant a lot to Barton, just saying hello to this beautiful and brave young woman.

He knew their friendship would never go any further, but what they had was good enough for him, and all in all he felt he had made the right decision that fateful evening when he was driving home after another long day of selling vacuum cleaners, when, on a moment’s impulse, he had yanked his steering wheel hard to the right and smashed his car into that pine tree.