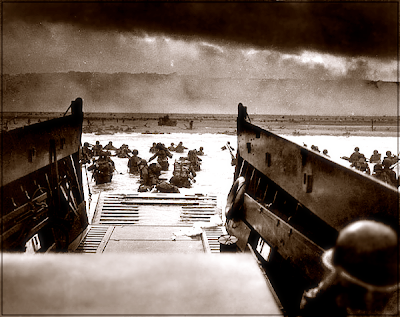 In our previous episode of this serialization of the unexpurgated director’s cut of Larry Winchester’s sprawling and Schaefer Award-winning masterpiece, we met Doc Goldwasser, the resident general practitioner of the town of Disdain, NM, in that fateful September in the year 1969. With his characteristic casual virtuosity Larry here delves into the backstory of this drug-addicted physician:

Something hitting the back of his head and then he saw a bright light and fell forward into infinite freedom and happiness, he felt himself one with everything and then he rose up above his body which was washing ashore in its Mae West, he rose up above the beach and saw himself and all the hundreds of other GIs, dead or alive, floating or struggling ashore, and he rose up higher and he could see all the landing craft and amphibious tanks and trucks and beyond them all the hundreds and thousands of ships of the invasion armada and over on the bluffs he could see the Germans and their machine guns and cannons firing methodically away at the men and boats and vehicles in the water and on the beach.

And he felt he wasn’t alone up here, he couldn’t see them but he sensed there were others around him and above him, other dead guys he supposed but then what did he know, and he heard a song, what, some Frank Sinatra tune --

Then a wave broke over him and he coughed up salt water and he was gasping for breath on the wet sand, the surf washing over him.

If he stayed there he felt as if he’d slip out of his body again and not come back this time so he pushed himself up, barely feeling himself and not hearing anything except a rushing in his head like the surf, and he made it to a seawall across the beach where a lot of other guys crouched and sat, with the bullets flying over their heads.

He sat there staring out at the beach and all the hell breaking loose on it, he was in his body but not of his body, looking out through his eyes, and then smelling through his nose, cordite and smoke and burning gasoline, and then feeling with his wet skin.

This roaring in his head and far away the firing and explosions.

And then the pain set in like a hot steel poker stuck in the bone behind his ear.

He wanted to pass out, but he thought, If I pass out I’ll die.

He realized he still had a musette bag filled with morphine syrettes. Gritting his teeth, tears running down his face, he fumbled out a syrette, got the cap off, jammed the needle into the back of his neck and squeezed the morphine in.

And it worked, the pain just melting away down his spine, the roaring in his head dying away, the sounds of the guns growing louder, but he was deep down inside himself and there was no pain.

He dozed off for a minute or so, and when he woke up he shook some sulfa on his wound and got a bandage on it, and then he went to work on all the other wounded guys all around.

That afternoon when the pain behind his ear gradually returned he gave himself another shot of morphine.

That night the regimental surgeon cleaned up the Doc’s wound, but one shard of shrapnel was too deeply embedded in the bone, and he left it in, and there it stayed.


Over the years the Doc had kicked his addiction to narcotics more than a dozen times, but he always fell back. Something had gone out of him in the past several years though and now he never even tried to kick.

And at odd times, usually on waking, but sometimes while driving through the desert or treating someone or talking to someone at Enid’s, he would feel his consciousness slipping to one side inside himself, and he was separate from all the universe.

But he would deal with it, go through the motions until his mind slipped back in place of its own accord or until he took a dose of tincture of opium.

And sometimes he thought of that time when he had escaped his body, flying up there with the others, whoever they were.

Well, that had never happened again.

(Click here to go to our next thrilling chapter. Turn to the right hand column of this page for a listing of links to other episodes of Larry Winchester’s A Town Called Disdain ™, a Larry Winchester/Low Road Production, now in development as a possibly major five-part television event on the Sci Fi Channel.)

In truth, I've never read a screenplay but it's hard to believe anyone could film this prose.
Move over Norman Mailer. Oh, sorry. He did that already.
Anyway, Disdain has its share of vets. Wonder if something in the water helped both Doc and Harvey survive their separate hells?

The water in Disdain tastes like boiled-egg water that's been left to sit out for a day, so I don't think that's much help. But all will be revealed in just another hundred pages. Or maybe two hundred pages.