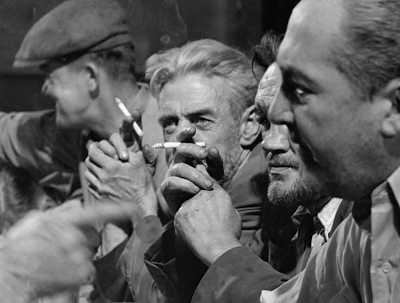 Let’s rejoin our hero Arnold Schnabel in the Little Caesar Room, where he has found himself in the company of two-thirds of the Trinity…

(Kindly go here to read our previous chapter; prospective completists may click here to go back to the all-but-forgotten beginning of this Gold View Award™-winning 69-volume autobiography, every word of which is true.)

“What better way to spend a rainy summer’s day than safely indoors, in one’s favorite chair, one’s cat curled up at one’s feet, and with a volume of Arnold Schnabel’s massive chef-d'œuvre open upon one’s lap.” — Harold Bloom, in Criterion.


“So, H.G.,” said Josh, and this time he actually was swirling his brandy around a bit in his snifter, but I think it was more for show than anything else, “what brings you down to this neck of the woods?”

H.G. looked at Josh for a moment before saying anything. Then he shoved his snifter towards Josh a few inches. It had gotten empty.

Josh lifted up the bottle and poured the little guy another stiff one. As H.G. drew the glass back towards himself Josh brandished the bottle in my direction,

I put my hand over the glass, which still somehow had an ounce or two of brandy in it.

Someone had to hold things together, and I was starting to think that this someone was going to have to be me.

“It’s not every day you’re going to be offered liquor this good, Mr. Schnarffel,” said H.G., and once again I felt the side of Josh’s knee bump mine.

I glanced at Josh, and as he put the bottle back down I could see that he was obviously trying to hold back a yell of laughter, either that or he was pretending to do so, because, let’s face it, it’s not all that amusing when the holy ghost himself keeps getting a man’s name wrong.

“What?” said H.G., looking from Josh to me and then to Josh again. “I say something funny? You think a guy like your friend here is used to fifty-year-old Napoleon brandy?”

“No, no, not at all,” said Josh, and he quickly pressed his lips tight together and pretended to read the label on the bottle.

“I know guys like you,” said H.G, pointing the lit end of his cigar at me. “I’ve been around the block a few times. You don’t really give a damn what you drink, do you?”

“No,” I said, “I don’t give a damn. I mean, sometimes I’d rather have a Manhattan than a beer, but as to the whiskey that the Manhattan is made with, or what sort of beer the beer is –”

“And you are not to be despised for this. It’s not your fault that you’re only what, a trolley-car driver?”

“Well, I was a railroad brakeman, actually,” I said.

“Same difference,” said H.G. He looked at Josh, who was taking another drink of his Napoleon brandy now. “The good fellow is not to be looked down upon just on account of his humble station in life. Somebody’s got to keep the trains running.”

“Oh, absolutely,” said Josh, after quickly swallowing the brandy that was in his mouth.

“So that’s all I’m saying,” said H.G. “Not every day a simple working man like Mr. Schellinger here gets a chance to drink some of the good stuff. And free, gratis, and for nothing I might add.”

“Oh, damn, that reminds me,” said Josh, “or not so much reminds me as makes me realize, because I hadn’t really thought about it before, but –”

“Please feel free to come to a point in your own good time,” said H.G., and he raised his own snifter to his lips.

“Heh heh, what I mean is we should leave some money for it,” said Josh. “For the Napoleon brandy we’re drinking.”

H.G. swallowed his mouthful, he definitely wasn’t doing that swirling of the liquor and the sniffing and swishing in the mouth and the savoring stuff. He was just sloshing it right down as far as I could see.

He put the snifter down, put his cigar in his mouth, then reached inside his suit coat and brought out a big leather wallet. He opened it up, took out a hundred-dollar bill and laid it on the table.

He put the wallet away and took the cigar out of his mouth.

“Do you think that’s enough?” said Josh. “I mean, you did say it was the fifty-year old stuff.”

Once again he stuck the cigar in his mouth and took out the wallet. He opened it up again, took out another hundred and laid it on the first one. He folded up the wallet and put it away again. He stared at Josh. He still had that big cigar in his mouth, and it seemed to me he was silently daring Josh to say something. Which of course Josh did.

He was leaning forward, and reaching back to get his wallet out of his trousers pocket, but H.G. picked up his snifter and put it down again on the two hundred-dollar bills.

He took the cigar out of his mouth and stared at Josh.

“I got it,” he said. “Nobody calls H.G. a cheapskate. Nor a piker, nor a sponger, nor a tightwad nor a Scrooge.”

“No one’s calling you a cheapskate, H.G.,” said Josh. He had his own wallet out now.

He jabbed the lit end of his cigar in Josh’s direction.

“Never been so sure of anything in my life,” said H.G. “And that is a very long time.” He turned his gaze on me now. “If you don’t mind my asking. How old are you, Mr. Schafly?”

I felt Josh’s knee nudge mine again. He seemed to be having a good time, but it was disconcerting the way he kept nudging my leg. But then, let’s face it, the whole situation was disconcerting.

“Forty-two? You look younger than that.”

“That’s because I’m in a fictional universe now,” I said. “And I’m a different person in this world. You see, I’m supposed to be this young bohemian poet, named Porter Walker, and –”

He had been cradling his snifter on the table with his right hand, but now he let go of the glass and raised this hand, palm outward, like an Indian saying “How”.

He stared at me. Again I felt a nudge from Josh’s knee, and for the forty-second time that day I broke out in a shower of cold sweat.

“I thought it was Ernest,” said the little guy.

”I didn’t ask you for your whole curriculum vitae.”

“Fine. Noted. Now let’s move on. I want you to imagine, Mr. Scheissen, if you will, I want you to try to imagine being a million times older than forty-two years of age.”

“You got that straight in your head?”

“Yes,” I said, lying blatantly, because I somehow knew it was better that way.

“I should think so,” he said. “But – and as vast as that number is – it is still not even one millionth of how old I am.”

I didn’t know what else to say.

He continued to stare at me.

I felt Josh’s knee nudge mine again. I really wished he would stop doing that.

“So you see my point,” said the little fellow.

“Ignore him, Mr. Schoendienst,” said H.G. “Because now I think you do take my point, don’t you?”

“In other words I could sit here adding ‘verys’ all night long and you would still have not the slightest concept of how old I am.”

He picked up his drink, took another good gulp.

He took a pull on his cigar, looking at me all the while. Then he exhaled another great cloud of smoke in my general direction.

“Anyway,” he said, finally. “Contrary to popular opinion I didn’t come down here to talk about Napoleon brandy nor about how old you are, Mr. Schwarzmann, nor about how infinitely older I am.” He tapped the two hundred-dollar bills with his index finger, which was only the size of my own little finger. “Nor did I come here to argue about who picks up the bar tab.”

He continued to stare at me, and suddenly I felt guilty.

“I only have about seven dollars, I think,” I said. “But I’d be glad to leave something for the tip –”

I started to reach for my wallet.

“Don’t be sorry. Just listen when somebody says something.”

“You,” said H.G., pointing his tiny index finger at Josh, and I’ll tell you, I was very glad that he was addressing Josh now and not to me.

“You are the reason I’m down here, buddy. You.”

“Don’t be funny. And I’m here because you-know-who sent me.”

H.G. stared at him for a long moment, and then he cast his gaze on me again.

“You believe this guy, Mr. Schwarzwald?”

He indicated Josh with his thumb. His thumb was about the size of my big toe.

“What? You believe him?”

(Continued here. We have no choice.)

(Please scroll down the right-hand column of this site to find a possibly current listing of links to all other available chapters of Arnold Schnabel’s Railroad Train To Heaven©, an Alexander Korda Production. Now appearing also in the Collingswood Patch™: “South Jersey’s foremost if not only voice of high culture.”)

Is Josh a kind of prodigal son?