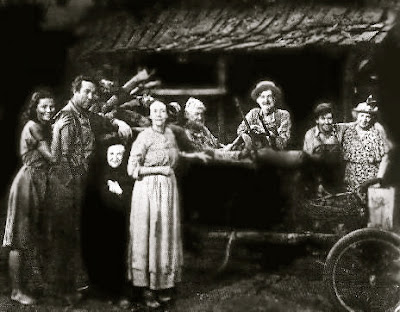 Previously in Larry Winchester’s critically-acclaimed (“Makes All The Pretty Horses look like Little Women.” -- Harold Bloom) masterpiece, our heroes Harvey, Dick and Daphne found themselves in a compromised position atop a mesa in the nuclear-blasted desert outside a town called Disdain.

Sheriff Dooley waited until his hangover abated a bit on the afternoon of the day after Bull Thorndyke’s death before he drove out to the Thorndyke shack to give the family the news.

He would have preferred to telephone, but the phone company didn’t run lines out to Coyote Canyon where the Thorndykes lived, and the Thorndykes probably wouldn’t have got a phone in anyhow since they had no one to call and there was no one who would want to call them, either. And even if they had gotten a phone they wouldn’t have paid their bills and the service would have been shut off. That was just the type of people they were.

Scrawny Otis the older brother and fat Naomi the young sister and bigger and fatter Old Man Thorndyke all swore up and down they understood and that that damn Bull always weren’t nothing but a no-account jackweed fuckwad no-how.

Then they offered the sheriff some of their moonshine tequila that looked like pig sperm and smelled like dead bugs and gasoline.

The sheriff declined, but after he left they sat around drinking and getting mean and talking about how they was gonna kill Harvey and get away with it too.

They didn’t really care about Bull, in fact they were glad he was dead. They didn’t give a fuck. They were just plain mean, that’s all, and now they had an excuse to be really mean. It felt good.

Later that day they drove into town in their ‘47 Hudson. They stopped at the Hideyway and had a few Falstaffs and blackberry brandies, and they told all and sundry that Bull had been looking to get his fool self killed ever since he was born, and they held no book against young Harvey, no sir.

Then they left after shaking hands with everybody, and went out to get Bull’s army truck which was still sitting in Burt’s lot.

Otis wondered if they shouldn’t go claim Bull’s body and arrange for a burial or something.

Otis couldn’t think of a good reason, so they drove the truck and the Hudson back to their place and went in and ate some of Naomi’s critter stew and then drank their moonshine tequila and home-brewed pulque while they chewed jimson weed and cleaned and loaded their firearms.

The Thorndykes pretty much wrote the book on no-account lazy white desert trash, but they practically lived on that continuous stew into which Naomi would drop their dismembered poachings of quail and roadrunner and coyote and fox and bobcat and chuckwalla and kangaroo rat, and if there was one thing every one of them was good at it was shooting.

(Click here to see what these two-bit redneck peckerwoods get up to next. Kindly turn to the right hand column of this page for links to other episodes of Larry Winchester’s A Town Called Disdain, soon to be a smashing new computer game from Ha! Karate (featuring the voices of Jake Gyllenhaal, Maggie Gyllenhaal, Ralph Fiennes, and Billy Bob Thornton.)

What's jimson weed and why chew it? I'm so clueless about this nation's culture. What's chuckwalla?
Pulque, I've heard about, but I thought it was Mexican, but New Mexican/Mexican, maybe it's not so different.

From Wikipedia, admittedly not always the most reliable source:

"Datura stramonium, known by the common names Jimson Weed, Gypsum Weed, Stink Weed, Loco Weed, Jamestown Weed, Thorn Apple, Angel's Trumpet, Devil's Trumpet, Devil's Snare, Devil's Seed, Mad Hatter, Crazy Tea, Malpitte, The Devil's Balls and, along with datura metel, Zombie Cucumber is a common weed in the Nightshade Family. It contains tropane alkaloids that are sometimes used as a hallucinogen. The active ingredients are atropine, hyoscyamine and scopolamine which are classified as deliriants, or anticholinergics. Due to extremely high risk of overdose, many deaths and hospitalizations are reported from recreational use."

So in other words, if someone offers you some, just say no.

Turning to Wikipedia once again for "chuckwalla":

"Chuckwallas (less commonly Chuckawallas) are large lizards found primarily in arid regions of the southwestern United States and northern Mexico. Some are found on coastal islands. There are five species of Chuckwalla, all within the genus Sauromalus; they are part of the iguana family, Iguanidae.

"The name Chuckwalla derives from the Shoshone word "tcaxxwal" or Cahuilla "caxwal", transcribed by Spaniards as "chacahuala"."

Pulque is indeed a traditional alcoholic beverage brewed from agave juice in Mexico, and I suppose the Thorndykes learned the method (or bought their supply) from the local Mexican-descended or Native American population.

The irony never stops. This plant is legal, yet read the insane reviews:

Anon: Whoa! I read some of those stories, and that it one scary natural substance!

This makes the Thorndykes even scarier than they were.

Thanks for the information. My impression, who knows from where, was that jimson weed was prevalent in the Southwest and not especially dangerous. So now I know better.

Jimson weed is one of the principal substances popularized (OK, popular for drug aficionados)by Carlos Castaneda in his series of books about Don Juan (the brujo, not the lover). Since it has some unfortunate side effects, even the more dedicated abusers in the seventies opted to chew a few Hawaiian Woodrose seeds instead. The advice of Nancy Reagan notwithstanding, it is probably wise to demur, just on general principle.