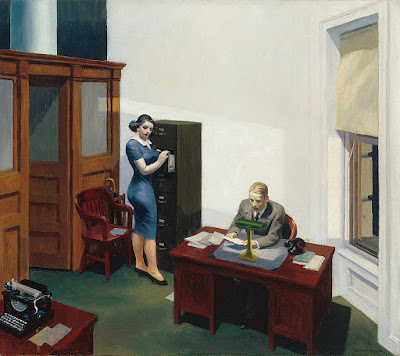 Millie had gotten fired from another job, and as usual it was because of a man.   This job had been as “editorial assistant” for a leftist weekly called The Rosa Luxembourg Review. It didn’t take long for Millie to find out what the editor really wanted her to assist him with, and this time she got so mad that when he tried to pull her down on his lap she slugged him with the little bust of Karl Marx he kept on his desk.

“And you call yourself a Communist,” she said, as he sat there in his swivel chair, holding a handkerchief to his bleeding head and crying.

“How many times have I told you,” he said between sobs, “I am a Trotskyite, not a Communist.”

“Well, you’re a disgrace to Leon Trotsky and to leftists everywhere.”

“I’ve heard that one before, from other chumps who thought they were God’s gift. I want a whole month’s severance pay, and I want it now, and in cash.”

“What I should do is call the cops and have you arrested for assault and battery.”

“What I should do is call your wife and tell her what a swine you are.”

“I’ll write you a check for two weeks’ severance pay.”

“You will give me cash for a month’s severance pay. That’s a hundred bucks.”

“Millie, I don’t keep that kind of cash in the office. What do you think this is? Forbes? Here, I’ll write you a check for a hundred right now.”

“And then put a stop on it as soon as I’m out of the office?”

“But, Miss Murphy, I’m telling you I don’t have a hundred dollars in cash in this office.”

“How much do you have in your wallet?”

He took out his wallet. He was still sniffling, still holding his handkerchief to his bleeding head. He laid the wallet on his desk.

“Here, you’re welcome to whatever is in there, now please take it and go.”

She picked up the wallet, opened it, took out the cash that was in it.

“Twelve bucks? You must be kidding me.”

“I edit a leftist literary weekly. How much money do you think I make?”

“I don’t know, how big is the allowance your parents give you?”

“I don’t get an allowance from my parents.” (Actually it was a trust fund.)

“Then how do you afford to live in a townhouse in Sutton Place?”

“It’s a duplex, not a townhouse, and my wife’s parents gave it to us.”

“Look, please, Millie, take the twelve dollars, and I’ll write you a check for a hundred and I won’t report you to the police and you won’t call my wife and we’ll call it even. I’ll even give you a letter of recommendation. Miss Murphy, are you listening to me?’

She was looking over at his golf bag in the corner.

“Nice set of clubs,” she said, putting the twelve dollars up her sleeve. “What do you go around in?”

“Well, it depends on the course, but – what are you doing?”

She went over to the clubs.

“MacGregors. What did you pay for these?”

“They were a birthday gift from my wife last month, and I’m sure I don’t know – wait, what the – Millie –”

She hoisted the bag onto her shoulder.

“Now we’ll call it even,” she said, and she walked out the door with the golf clubs.


His wife would kill him. How would he ever explain the missing clubs? Wait, he could say he left them in the back seat of his car while he was having lunch, and he forgot to lock the car door, and someone had stolen them. That’s what he would say. But she would still kill him.