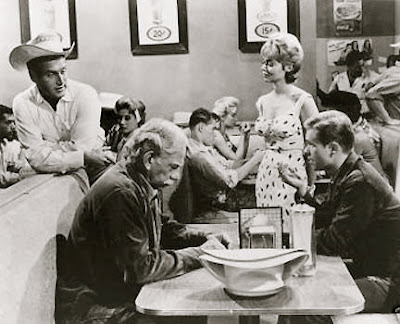 In our previous episode of A Town Called Disdain (now presented for the first time in the extended and unrated version preferred by its author, the legendary movie director, raconteur and bon vivant Larry Winchester), Harvey, just back from the army, hooked up with his old pal Tip Bullock and had dinner at Harvey’s mom’s place. Then they got high and headed over to Enid’s Café.


They were lucky and one of the two pool tables was free. They got a couple of Dr. Peppers off José at the counter and Harvey said hi to the guys and chicks there, who were pretty much the same guys and chicks who had been there the last time he’d been in here, two years ago.

They racked up their balls and Enid came out from the kitchen wiping her hands on her apron.

She grabbed Harvey’s ass as he was leaning over getting ready to break.

Enid was about thirty-five, a tall strong voluptuous woman who had inherited the coffee shop and ran it to support herself while she made sculptures out of great big rocks she found out in the desert and the hills and hauled back in her ‘54 Dodge flatbed truck with the tommy-lift.

Harvey broke, and all the balls stayed on the felt but none of them went down any holes. He straightened up and Enid ran her hand along the short hairs at the back of his neck.

“How about Vietnam?” said Enid.

“Vietnam really sucked. Fuckin’ hot and humid, and it smells like shit. Good shot, Tip.” Tip had just sunk the four. “Oh, yeah,” said Harvey, “and there’s a war goin’ on. But fortunately I spent most of my time at a rear echelon gig just fuckin’ off all day.”

“So what’d you do with all your time if you were fuckin’ off? Chase those cute little Vietnamese girls?”

Tip had plopped the six-ball in.

“Crazy. Listen, Harve, you ever want to come around and just talk about books, or borrow some, well -- you know --”

Enid was the only person in town who had ever gone to college or who had ever read a book more complicated than a Harold Robbins.

Tip missed his next shot, and Harvey stared at the table. He was pretty fucking stoned is what he was.

“Okay. That one there, in the corner.”

He took aim and shot and missed.

Harvey straightened up and looked at her.

There was a long pause while he tried to think of an answer and then she just smiled and ran her finger along his cheek.

“How about stayin’ out of trouble?” she said.

“What was up with you shootin’ Bull Thorndyke?”

“That was self-defense, Miss Enid.”

“Yeah, I’m sure it was. And what was up with that motorcycle guy got killed?”

“That was this Mr. Smith killed him. That was self-defense too.”

“Number twelve ball,” said Tip, and he pocketed that motherfucker too.

The door of the café opened and the clean-cut nice young couple who had asked about the motel came in.

Later Tip and Harvey sat crosslegged on the hood of the car up on a mesa looking out at the desert and the little dark line of mountains beyond and up at the stars, and they smoked another doobie and talked.

It was up here they had watched that secret H-bomb test when they were kids; secret, but the government had told everybody in town to stay inside, and Harvey and Tip had sat here with their sunglasses on and flash it was like a sun exploding out in the desert, and they saw the flash getting bigger and bigger and then the cloud rising up all churning and climbing with fire all up in it and then this long scary deep rumble that got louder and louder until it got right in your bones, and then it got dark all around and the explosion cloud kept churning up higher and bigger with the fire all in it ten thousand different colors, and then came this warm electric-smelling wind blowing hot dust all over and around them and they could taste the warm lead in the fillings in their teeth.

That test had caused half the people on the desert side of the hills outside the town to get sick and had killed off most of the livestock and vegetation in the area. Every household in the neighborhood got a five thousand dollar check to keep quiet about it in the interests of national security. One rancher had threatened to sue the government and go to the newspapers, but he got a visit from a skinny naval officer in a big black Cadillac, and after that the rancher changed his mind. He sold his ranch to the government and moved himself and his family, supposedly to Mexico.

Tip and Harvey sat there and watched the furry black tumbleweeds skipping by way down there in the desert, and every once in a while they’d see the lights of a plane or a squadron of planes go by, and sometimes they could hear them but other times they couldn’t hear a thing, just the howling of a coyote, and the wind.

They laid back against the windshield with their hands behinds their heads and looked up and saw all the stars and the blinking satellites, and every once in a while a star shot out from the rest and then disappeared.

(Go here for our next thrilling chapter. Kindly turn to the right hand side of this page for links to other episodes of Larry Winchester’s A Town Called Disdain, as well as to detailed summaries of many of his classic major motion picture events.)

And now a word from Mr. Frank Sinatra:

You know how much I like Disdain, but the town's getting weirder and weirderer--Tip shot two four balls.

Whoah! I told Larry he shouldn't have had that last doobie!

Thanks, A.M., I've gone in there and corrected the weirdness. We don't want the town of Disdain to be any more surreal than it has to be.

Your special edition of Larry's new DVD boxed set "Sidewalks of Fear" will be in the mail as soon as this latest shipment makes it through customs.

That jukebox is a killer. Has it got any Tommy James on it?

It never occurred to me that Disdain, NM was surreal. First hint I had came with the "Molloy" reference--big canyon there between Harold Robbins and Samuel Beckett. Or maybe not. What if all those Blackguard mercenaries we have in Iraq took a Beckett break every day? Or maybe they already do. Maybe they take turns pairing off as Vladimir and Estragon before they sleep.
But back to Disdain: What's surreal to me is that the town gets bigger every time I turn around.

Absolutely there's Tommy James on this jukebox. In fact the immediately preceding song was T.J.'s "Crimson and Clover".

...please where can I buy a unicorn?