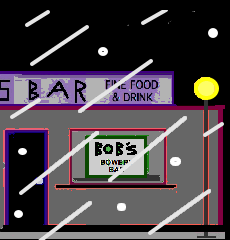 The cold rain had turned to sleet and then the sleet had changed to snow, thick fat snowflakes swirling through the street lamp’s light and whitening the sidewalks and the street, and still Smiling Jack stood under his old umbrella with his satchel of pamphlets. Another hour, and then he could head down to Old St. Pat’s basement and the meeting.

“Can I offer you a book, buddy?” said Smiling Jack as the man came near.

“They call me Smiling Jack. And you’re Hector, right?”

“That’s right,” said the fellow, a pale young guy wearing a thin topcoat and a fedora.

“We had a few conversations at Bob’s Bowery Bar.”

“I think I remember you now,” said Hector.

“We once had a very interesting discussion on the meaninglessness of life.”

“Maybe you’ve wondered where I’ve been.”

“But I am in a much better place now, Hector.”

“I shall indeed, Hector, but before you go, please let me gift you with a book.”

“A book I’ve written. Oh, I’m sure it’s not as well written as one of your books, Hector, but it comes from the heart. Go on, take it, buddy. For free. Absolutely free, as are all the best things in life.”

“Okay,” said Hector. He took the little booklet and looked at its cover, with its childish drawing of a drunk-looking man leaning against a lamp post and holding a bottle, and in large letters

ARE YOU A DRUNKARD?

“SMILING JACK”
“I hope you enjoy it,” said Smiling Jack. “And, perhaps, profit from it.”

“Would you like to go get a cup of coffee, Hector?” said Smiling Jack.

“Sure, why not? We could just go across the street to Ma’s Diner, have a nice cup of joe, a slice of Ma’s delicious warm sweet potato pie –”

“Maybe some other time, Jack.”

“Got to go somewhere?”

“Okay, then, Hector, maybe some other time.”

“Sure,” said Hector. “Thanks again for the book.”

And Hector turned and walked away through the falling snow. Smiling Jack watched as Hector stopped in the glow of the neon sign of Bob’s Bowery Bar. Hector stood there for a moment, thumbing through the pamphlet Jack had given him, and then he casually tossed the little book book away, and it fluttered down into the gutter of the Bowery. Hector opened the door of Bob’s and went inside.

Smiling Jack sighed, and wondered if he should walk over and pick his pamphlet up out of the gutter before it got too wet. But, no, if he walked over there he would be right in front of Bob’s, and he didn’t want to go that close to its entrance, not now.

He stood there and wondered why he bothered. Why did he bother with anything? Why had he written this stupid book and spent all his money getting it printed up? No one cared. No one would read it. No one would be saved. What was the point of anything? Why stay sober? Why even stay alive? Why not just follow Hector into Bob’s, get roaring drunk, and then stumble down to the Brooklyn Bridge and do the job right this time…

Smiling Jack turned, and it was Ma, from Ma’s Diner. She had a shawl over her head and she held a large-size Dixie cup.

“I been watching you stand out here in the cold rain and now the snow all evening, so I brought you some nice hot cocoa.”

She held out the paper cup, and Smiling Jack took it. The cocoa was topped with whipped cream, and there were even slivers of shaved chocolate laid on top of the cream.

“Don’t stand out here all night. You’ll catch your death,” said Ma, and she turned and crossed Bleecker in the falling swirling  snow, and Smiling Jack watched as she opened the door to her diner with its misted windows and its Christmas decorations and lights.

He didn’t own a pair of gloves, and the cup was warm in his hand. Smiling Jack heaved another sigh, a great sigh, and then he took a sip of the hot cocoa.

{Please go here to read the “adult comix” version in A Flophouse Is Not a Home, illustrated with Christmas cheer by the illustrious rhoda penmarq…}
Posted by Dan Leo at 1:08:00 PM