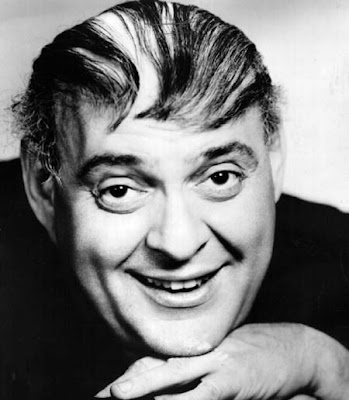 The title said it all. The Jolly Six Bums followed the picaresque adventures of a band of lazy idle wandering loafers: the jocular Big Mike (Zero Mostel), the wily Joe (Akim Tamiroff), the bibulous Zeke (Thomas Mitchell), the roisterous singing team of Hal (Burl Ives) & Jerry (Theodore Bikel), the slick young Alistair (Roddy McDowell), and the sultry Mary (Evelyn Ankers). They traveled around the country, very occasionally picking up the odd temporary job at carnies and circuses, but more often singing songs and dancing on streetcorners for nickels and dimes, rooking rubes with games of three-card monte and loaded-dice crap shoots, hustling pool, and generally just living off the fat of the land. Each episode would find our merry crew in some new town or city and bucking up against the local sheriff, tycoon or mafia boss and other assorted squares.

One of the most fondly remembered episodes was “The Jolly Six Bums Hit Vegas” (written by Arthur Miller, directed by Larry Winchester), where the merry sextet roll into town on a freight car; cheat a high roller out of a hundred thousand bucks in a poker game; parlay that into a cool million at the blackjack table; blackmail a US senator caught in a compromising situation with Mary; uncover a Russian spy; lose all their money on a flip of a coin to special guest star Orson Welles; and finally, with both the FBI and NKVD agents hot on their trail, skedaddle out of town on the same freight car they came in on.

Created by the great Phil Leotardo, the peripatetic format of this show paved the way for future travelogue dramas like Route 66, The Fugitive, Run For Your Life, and Then Came Bronson. With its powerhouse cast and original teleplays by Samuel Beckett, Edward Albee, Eugène Ionesco, and Tennessee Williams, this was a show that by all rights should have been huge. Instead it was cancelled after only five epsiodes, proving that then as now it’s the idiots who rule the world.

Ah, but how well we remember the theme song, sung by the entire cast:

The other day we met a guy
We never met before
He asked us if we wanted a job
Shovelin' iron ore.
We asked him what the wages was:
"A buck-and-a-half a ton."
We told him he could keep his job
'Cause we was on the run!

Oh! Shootin' stumps and stogies,
Hi-diddly-dum!
Sleepin' in the boxcars,
Put me on the bum!

(Turn to the right hand side of this page for a complete listing of other Great Lost TV Shows.)
Posted by Dan Leo at 2:24:00 AM

I seem to remember Channel 12 in Philly running these episodes in an overnight marathon back in the late 80s as part of one of their funding drives, and I stumbled onto the Vegas show in progress. I was totally blown away and watched I think three more episodes that night before I passed out. Had no idea Arthur Miller wrote that Vegas episode. For one thing it was fucking funny! Arthur Miller, funny!

I'd definitely pay good money for this stuff if it's available.

Definitely one of the best shows ever. These shows were televised LSD.