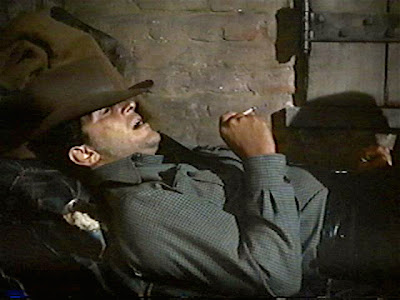 Arnold Schnabel, the author of these memoirs, has gone to a party with his inamorata, the bohemian Elektra. In our previous episode we left him as he attempted to join her and some friends on the second-floor porch of the massive and lovely Victorian (built by Frank Furness in 1880) home of the formidable Mrs. Biddle...

When I got to the doorway I stopped and listened to Sammy sing:

Then I went through the doorway. This was a bedroom, a night-table lamp was lit. On the opposite side of the room was a screen door, presumably opening onto the porch I’d been trying to get to all this time. I went on through the room, opened the door and went out.
At last.

A light in a blue fixture glowed in the ceiling, and Sammy sat in a rocker off to the left, with his back to the porch railing; he strummed a guitar and sang, turning his head and nodding to me:

Can’t you hear me call?

Elektra, Steve and Miss Rathbone all sat in a white slatted wooden porch glider across from Sammy. A low and narrow glass-topped table was in front of the glider, with beer bottles and ashtrays on it. Elektra raised a hand in my direction, her eyebrows raised. I sat down next to her.

“Where were you?” she whispered in my ear.

“Uh, with Mrs. Biddle,” I said, which was true enough, although not the entire truth, but I didn’t want to get in a big conversation while Sammy was singing. I did whisper, though:

“I heard you singing. It was very pretty.”

“Thanks,” she whispered back.

And she rubbed my lower back with her hand.

I glanced across to Steve and Miss Rathbone. They were holding hands, or Steve was holding Miss Rathbone’s hand. Each held a cigarette in his or her free hand, and their heads nodded slowly as they gazed at Sammy as he sang on:

The porch was screened in, free of bugs. The trees I had seen from above now loomed before me, two stout oak trees, and Sammy seemed to be singing and playing in time to the brushing of their leaves against the screening in the soft and slightly salty breeze.

Elektra laid her head on my shoulder, and the four of us on the glider swung it gently back and forth.

Sammy’s eyes were closed as he sang, and even though he was basically singing just the same few words over and over again with slight variations his voice and the words carrying on these simple ringing chords seemed as true and as beautiful to me as anything I’d heard before.

It occurred to me that I was happy.

And, me being me, it also occurred to me that right that minute all over the world people were suffering, killing one another, starving, dying.

Was it right for me to sit here feeling happy while my fellow creatures suffered?
But then it occurred to me that all these suffering people would choose to be happy if they had a choice, so what sort of insufferable prig would I be to deny myself happiness if it fell my way?

“Sing the song, Sammy!” said Dean Martin, coming through the door holding a Manhattan in each hand and with a cigarette hanging from his lips. He was dressed as if for the golf course, in a green knit sport shirt and blue trousers.

“Drinks are here!” said Shirley, following Dean through the door and carrying a tray with five more Manhattans on it.

Dean and Shirley passed the drinks around.

“Cent’ann’,” said Dean, and we all raised our glasses and drank.

Sammy asked Dean if he would sing “that cowboy song from Rio Bravo,” and Dean said he would. He pulled around the one free rocker so that it faced between us on the glider and Sammy, and he sat down. Shirley sat down on his knee.

Sammy strummed the guitar, and Dean began to sing:

But still that familiar and horrible little voice in my head told me I didn’t deserve this. I had always felt barely worthy even to buy a ticket to see a movie, and here I was being entertained by these famous performers and absolutely free of charge while far better people than myself would have to pay good money to see them at the Latin Casino or the 500 Club.

I told the little voice to be quiet and to go away, at least for now. The moist breeze blew through the trees and through the screen. Elektra had sat up straight when Shirley handed her her Manhattan, but now she laid her head on my shoulder again. I felt her hand on my hand and her bosom against my arm.

“Hey,” she whispered, and I turned my head to look at her, into her dark eyes.

Gonna hang my sombrero
On the limb of a tree
Comin’ home, sweetheart darlin’
Just my rifle, pony, and me…

That was it, I felt like I was coming home, even though it was a home I’d never had, a home I had never been to. I had walked through hell to get here. But now that I was here, now that what remained of me was here, I was glad.

Whippoorwill in the willow
Sings a sweet melody

Then Sammy and Dean sang together:

Ridin’ to Amarillo
Just my rifle, pony, and me

The breeze tumbled a sweep of dark curling hair into Elektra’s face. I cleared it away with my fingers and she closed her eyes.

No more cows to be ropin’
No more strays will I see
Round the bend she’ll be waitin’
For my rifle, pony and me


(Go here for our next fabulous chapter. And kindly look to the right hand side of this page for up-to-date listings of links to other episodes of Arnold Schnabel’s Rheingold Award runner-up Railroad Train to Heaven™, as well as to many of his poems, so eminently suitable for wedding toasts, bar mitzvahs, confirmations, and Rotary testimonial speeches.)

Poor sensitive Arnold, worrying if he has the right to experience happiness: Who, I wonder, crushed his capacity for spontaneous joy? Couldn't be his religion; doesn't Catholicism encourage, even demand, spontaneous exultation in the Lord if no one else? Luckily, Arnold's happiness is more durable than any fleeting spontaneity.

Was that Ricky Nelson? Love his coif; if it stood up to long, sweaty days stifled by a cowboy hat, he probably used jello.

That was indeed Ricky Nelson, with his truly awesome quiff.

I remember feeling that way

..the way Arnold was feeling, that is

Hey pallie Dan, all I cans say is loves it and wishes I was there....thanks for such a wonderful trib to our Dino...and like Arnold, I woulda feel so unworthy...but so Dinopsyched at the same time....pallie you kept your word...and to be sure I'm gonna stay Dinotuned in....

My pleasure, Dino. And Arnold's of course.

Kathleen, you must not have experience with the torture version of catholism

How unfondly do I remember it all.

Where, I often wondered, as I shuddered beneath the blows, were the kindly Bing Crosbys, Barry Fitzgeralds and Ingrid Bergmans of Hollywood's mythical parishes?

Which was better, "Rio Bravo" or "Eldorado"?

Tedster, like the great Snickers vs. Three Musketeers or the Brady Bunch vs. Partridge Family controversies, scholars have been debating that question for years. El Dorado seems to get short shrift generally speaking, but, hey, to its critics I respond with two powerful words: Robert Mitchum. And I'll see your Ricky Nelson with a young Jimmy Caan.

I phoned Larry Winchester for his opinion, and he said, "They're both classics, and nobody makes 'em like that any more."