"The Bodhisattva Is My Buddy" 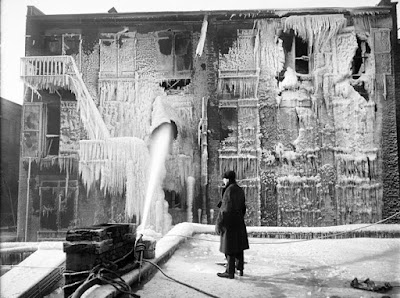 As he did on every first day of the month – or on the first Monday of the month if the first fell on a weekend or holiday – Gerry “the Brain” Goldsmith made the journey by foot and by subway from his sixth-floor walk-up tenement room at Bleecker and the Bowery to the midtown offices of the firm of Goldstein, Goldberg and Gold to pick up his remittance envelope.

Jerry emerged from the subway at 52nd Street into the bracing cold and looked up at that sky of solid steel grey up there between the buildings of Manhattan that scraped against it.

It was Monday, January the third – a new year!

At the age of forty-eight, Gerry  felt that his life had finally turned around. The previous month had been the best month of his life, since – since when? Perhaps since the month of his graduation (barely, but nonetheless) from Harvard, way, way back in that glorious year of 1927, when all of life lay spread out before him like an all-you-can-eat country club buffet. A week after getting his diploma he had boarded a tramp steamer for Calais with his graduation money in his Boy Scout wallet and with the security of his fifty dollars a month remittance (courtesy of the late Grandmother Goldsmith) for the rest of his life.

Yes, fifty a month went a long way in those halcyon days of the late 1920s, even in Paris, where he had lived lazily and contentedly for two years, in his cheap hotel on the rue Claude Bernard with the bathroom down the hall.

But, sadly, as the years passed by after his return to the States (just in time for the crash of ‘29), and as Gerry passed from beamish boy into chubby and dissipated and terminally shabby middle-aged man, that fifty a month had become harder and harder to scrape by on. But Gerry had always remained true to his principles. He had never seriously considered getting a job, even when, as usually happened during the last week of a given month, he had to live on day-old pumpernickel bread and hard-boiled eggs and forgo bock beer and even roll-your-own tobacco, no, he had accepted his lot, and all the while he had continued his work on his great magnum opus, his book of philosophical reflections, begun back in his youthful days of loafing in the cafés of Montparnasse and the Latin Quarter, subsequently filling up dozens of those schoolboy marble composition books all through the grey years, and which, just this past month, he had finally begun “typing up” with his old Royal portable, finally rescued from pawn thanks to the unexpected inheritance of one thousand dollars from his Aunt Edna.

And then there had been that puzzling out-of-nowhere Christmas card from his younger brother Alistair, and their Christmas Eve afternoon meeting at the bar at the Plaza, culminating in Alistair slipping him an envelope containing five twenty-dollar bills. Oh, sure, Gerry knew why Alistair had given him the hundred, hoping to mollify him so that Gerry wouldn’t try to contest Aunt Edna’s will; it was so like boring Alistair. How much had the old girl left Alistair, anyway? A hundred thousand? More? Gerry had no idea, and he didn’t care. If he stretched out that thousand-dollar windfall he might not have to have a bockless and tobaccoless last week of the month for a couple of years, and by that time his book would be finished, perhaps already published, with the royalties just streaming in.

His latest title for the book?

The Bodhisattva Is My Buddy.

Ha ha, just what the reading public was ready for in these dull and humorless commercialized years of the 1950s!


The Bodhisattva Is My Buddy., and Other Fables of Our Modern Age, by Horace P. Sternwall; an Ace Books paperback original, 1955; one printing, never republished.
Posted by Dan Leo at 1:31:00 PM