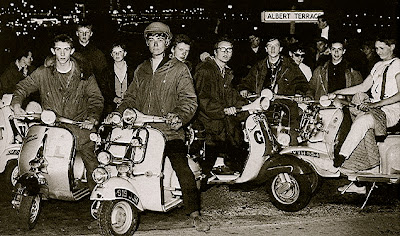 In our previous episode of Larry Winchester’s A Town Called Disdain: young Harvey, just back from a tour in Vietnam, finds himself in a Thunderbird convertible with the mysterious “Daphne Smith”, run off the desert road by a motorcycle gang called the Motorpsychos. Their leader, Moloch, standing atop the hood of the car, has -- after kicking his own man Crackle senseless for the crime of interrupting him -- taken out his penis with bad intention.

Fortunately Daphne’s husband Dick pulls up in the rancher Big Jake Johnstone’s red Cadillac. As Jake cowers hiding under the dashboard Dick vaults out of the car, marches over to the Cadillac, draws a revolver from his bermuda shorts pocket and points it at the head of Moloch’s penis.

(This episode rated R for violence, penile nudity, and the injudicious use of adverbs and adjectives.)

“Just hold it right there, fella.”

Dick was way up on the crest of the wave now, the adrenaline just rushing along with the acid.

Moloch held it right there, all quivering and glistening and purple-veined as it was.

Dick, still smiling affably, looked around at the surrounding Motorpsychos on their purring and farting bikes. He felt as if his feet were hovering just a few inches off the ground.

“Please, guys, don’t do anything rash,” he projected, like a good actor aiming to reach the cheap seats but still sound believable. “I had a friend of mine work on the action of this thing so I really only have to barely just touch the trigger when I cock it like this --” he cocked the hammer, “and, well -- blammo.”

He smiled up at Moloch, who was losing his erection rapidly.

“The orgasm of your life,” said Dick. “Now come down from there, fella, but keep your hand on your wiener. First kneel down. That’s right. Now just slide right off.”

As Moloch slid down from the hood of the car Dick moved the muzzle of the gun from the penis to Moloch’s forehead.

“Now turn around and put your hands on the car. You know how to do it.”

“You haven’t got the bollocks to shoot me.”

“But how badly do you want to find out?”

“Go ahead and shoot him, Dick,” said Daphne. She had tossed away her cigarette and taken a lipstick out out of her bag.

She leaned her face into the rearview mirror, puckering her lips and painting them with the lipstick.

“If he won’t turn around then blow his damn brains out,” she said, and, still looking into the mirror, she pressed her lips together.

Dick saw it in Moloch’s mirrored shades, and swung around just as Crackle somehow heaved his bulk up from the ground in a great eruption with a nasty-looking blackjack raised up in his right hand and coming around in a trajectory aimed to end right on Dick’s skull; time slowed down, Dick fired, the bullet shot into Crackle’s left eye, the big man flinched and pitched forward in a heap as Dick stepped aside, Crackle thumping against the Thunderbird and slumping down its side with blood pulsing out of his eye-hole, Dick swinging the barrel of the gun back over to Moloch’s forehead just as Moloch had his Royal Marine commando knife out from its sheath, and Moloch froze and everybody froze except for Crackle, who groaned on the ground and kept kicking his one good leg slowly and heavily as dark blood pooled out from under his head.

Sure enough, Daphne saw she’d gotten yet more blood on her shirt.

Then Sheriff Dooley’s blue ‘65 Plymouth Fury drew up just behind the red Cadillac that Big Jake was still cowering hidden in the footspace of.

“Goldang it what in tarnation.”

He got out of his car. Doris the waitress sat in the passenger seat with her thumbnail between her teeth.

“You boys move aside there,” said the sheriff.

Nobody moved, so the sheriff drew his big pistol and hit the first Motorpsycho he could reach on the side of the jaw with the six-inch barrel and the Motorpsycho fell over with his bike and knocked over the next one and that one knocked over another, and the sheriff stepped through the gap and strode up to the Thunderbird.

“Moloch, put that knife away. And mister I’ll take that peashooter if you don’t mind.”

Dick handed him the pistol, grip-first, and the sheriff shoved it into his waistband.

The sheriff touched Crackle with the toe of his boot and Crackle groaned.

“Harvey, seems to me you’ve had one eventful day your first day back.”

“These men ran us off the road and then were going to rape me,” said Daphne. She had found her cigarette holder and had screwed a cigarette into it. Harvey, still working on his original cigarette, gave Daphne another light with his Zippo. “They were also threatening to take advantage of young Harvey here,” she said. “Thank god my husband happened along.”

“She is a lying strumpet,” said Moloch. “This man shot my good friend in cold blood.”

“That big fat pig there was attacking my husband with a blackjack or a sap or whatever you call those things.”

Sheriff Dooley looked down at the shot man, who still held the leather-wrapped blackjack in his hamlike fist, and then the sheriff looked back at Moloch, whose now-flaccid penis still hung out of his fly.

Moloch put it away and zipped it up as Crackle groaned loudly and then vomited black blood. Dick figured the slug must have ricocheted off the inside of his steel helmet and gone back down into his throat. A wet rattle came up from deep in the man’s lungs, and then a rolling harsh ripple passed through his great body as it erupted a long bleating fart. Then he lay still.

The sheriff touched him again with his boot tip. A thick stench of fresh shit came up and mingled with the smells of blood and gunshot and cycle exhaust.

“Well, he’s dead,” said the sheriff. “Now, Moloch, I’m gonna let you go this time seein’ as how one of your brethren bit the big one. But you and your boys get out of this county and don’t never come back or there’s gonna be some more of you lyin’ in the dirt in their own shit and blood.”

The sheriff put the muzzle of his pistol between Moloch’s eyes.

“And you’ll be the first one.”

“Sheriff, we were just leaving.” said Moloch. “May we take our fallen comrade so that we may dispose of his remains in our own manner.”

“You can dump him down a dry shit hole for all I care, boy.”

“Thank you,” said Moloch, and then calling to his men: “Toadsbreath, Pigmind, I want you to hogtie Crackle and strap him down tautly to the back of his hog. It was his stated fondest wish that he be immolated with his Harley with high-test petrol and we shall honor that wish. Testicle --”

“You shall ride Crackle’s hog.”

“Very good. Sheriff, may I send two men back later to pick up Testicle’s machine?”

He turned in a slow circle, addressing his men:

“Come then, dear friends, let us take poor Crackle upon that flowery way that leads to the broad gate and the great fire!”

“Huzzah!” they cried as one.

Moloch then turned to Dick, and to Daphne and Harvey, still sitting in the front seat of the Thunderbird.

“And to you, my friends, I shall only say au revoir!”

(Click here for the next installment. For links to other episodes of Larry Winchester’s a Town Called Disdain, and to appreciations of many of his fine motion pictures, please go to the right hand column of this page.)

unique and perceptive description..they do fart and purr

This episode proves that even the grisliest violence can dance.
Moloch, a killer-rapist, who doesn't know when to zip up, speaks like James Cagney combined with a scholarly Gary Cooper.
Dick's psychedelic Bermuda shorts reveal his debonair heart and soul. But what's Daphne wearing? Lipstick and a cigarette holder might mean a satin gown, a tutu, Barbara Stanwick in her wild west get-up or Jean Seaborg (do I have that short-haired actress right?)...

I had to go back myself to check out Daphne's attire, but here it is from way back in Episode One:

"She carried a large canvas shoulder bag and wore a tan pith helmet, sunglasses, a white shirt and khaki shorts."

She doesn't seem to be wearing the pith helmet in the current scene, but she is looking very Abercrombie & Fitch here I think. Jean Sebeg would have been pretty good casting back in the 60s. And in fact Larry told me that this novel had its origins in a film script he wrote back in the 60s, and which in fact he was in pre-production on when one of his producers was suddenly arrested for some international monetary malfeasance and the project fell through.