In a pensive mood: the late great Billy Fury 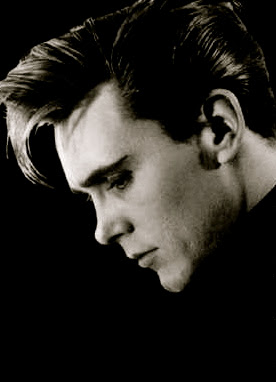 Best summed up by Larry Winchester himself in his memoir I’ll Take the Low Road:

My blues movie Harvey Harmonica had sunk like a stone in the States but it did surprisingly well in Britain, so one day I got a call from my old friend Tony Hinds at Hammer Films Productions; Tony wanted to break into the rock ‘n’ roll audience, and he had the popular singer Billy Fury available for three weeks shooting, a modest budget, and a really crappy screenplay. Well, I wasn’t working that week so I agreed, providing I could write my own script. I met with Billy over a few pints at my favorite London pub “The Crown & Anchor”, and over two or eight pints of Guinness we managed to hash out a reasonable storyline based on Billy’s own rise from the rough streets of Livepool to the top of the charts. We tossed in a storyline with a crooked music promoter (Wilfred Hyde-White) and Billy’s rough but protective longshoreman pal (Oliver Reed), plus a romance with the promoter’s secretary and aspiring songstress (Helen Shapiro), who of course urged Billy to follow his muse and record his own songs instead of the treacle that Hyde-White and his goons want him to perform.

This amazing film (featuring guest musical performances from the lovely Miss Shapiro, Adam Faith, and the Pretty Things) had the misfortune to be released the same week as Richard Lester’s Beatles classic A Hard Day’s Night, and so got lost in the shuffle. To this day Long Tall Shorty has never been shown in the U.S.

Criterion Collection, it’s time to step up to the plate!

(See the right hand side of this page for a listing of links to appreciations of many other Larry Winchester films. Feel free also to check out our continuing serialization of Larry's long-out-of-print novel A Town Called Disdain, now presented for the first time ever in the complete and unexpurgated "director's cut".)

I remember reading an interview with Morrissey where he said that this was one of his absolute favorite movies.