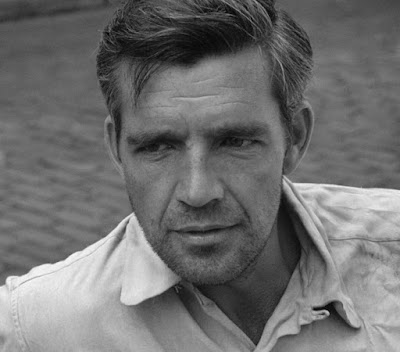 On this rainy night in August of 1957, we left our intrepid hero Arnold Schnabel (now in the corporeal form of “Porter Walker, brooding bohemian poet”) in the men’s room of Bob’s Bowery Bar, with his new acquaintance Lucius Pierrepont St. Cloud III, author of Hootenanny in Harlem: A Sonnet Sequence...

(Kindly click here to read our immediately preceding chapter; if you are the the unfortunate victim of an obsessive compulsive disorder then you may want to go here to start at the very beginning of this Gold View Award™-winning 68-volume memoir.)

“The great thing – or rather should I say one of the myriad great things – about Arnold Schnabel’s massive chef-d'œuvre is that if you’ve read all the way up to the most recently published chapter and are hungry for more you can always go back and read the early volumes which you now only vaguely remember, if at all.” – Harold Bloom, in the High Times Literary Annual.


I went through, and the man skipped forward nimbly to my side, taking my arm in his.

He was fat, but he was short, at least six inches shorter than me, and he shouted up at me over the noise of the jukebox music and the shouting and laughing people out there in the bar:

“I take it you have never been here at Bob’s before!”

“How did you know that?” I shouted back down to him.

“Because, my friend, I am nearly always here, and I have never seen you here!”

We were still right outside the men’s room door in this narrow hot passageway, and I tried to take a step to head out to the barroom, but he pulled me up short.

“Yes, of course it’s a bar, but do you know its special shall we say distinction?”

“No!” I said, shouted, over the noise and the music, some sort of jazz music with a loud crying horn of some sort, “I have no idea, so why don’t you just tell me.”

“You’re really not very hep, are you?”

“About what makes Bob’s Bowery Bar so shall we say ‘special’!”

“It caters to insane people?”

“Is it one of the anterooms of hell?”

“Perhaps, in a sense. But try again.”

“They make really good burgers here? Because I could really go for a nice big burger if I ever get a chance to order one –”

“Oh, Bob’s is world-famous for their burgers, and indeed for their entire menu, but that’s not what I’m talking about either. Try once more.”

“No. I give up. For God’s sake will you just tell me and get it over with?”

“No need to be so aggressive, white boy.”

“Right, sorry,” I said again, although already I was feeling less sorry. “Mr. St. Cloud. Or –”

“I have lived for over half a century,” he said, cutting me off, and I couldn’t blame him. “I have traveled the length and breadth of this land of so-called liberty. I have lived in Paris and Tangiers and in Mexico City. I have shipped out on merchantmen on voyages to the Far East and to the Baltic and round the Capes Horn and Good Hope both. But never in my life has anyone ever asked me such an idiotic question.”

“Solicitous of your feelings?”

“Why? Because my skin is brown? Because my ancestors were shipped to this country in chains, like cattle, nay, worse than cattle, for cattle to the best of my knowledge are not forced to wear shackles? Is that it?”

“Are you being solicitous of my feelings because I am a Negro, and you are afraid I am perhaps easily offended.”

“Then why are you being so absurdly polite?”

“Because I am not quite right in the head,” I said. “I had a complete mental collapse not too long ago. And I wasn’t wrapped too tight even before then.”

He looked at me through those thick horn-rimmed glasses, cocking his head slightly, taking a drag on his Philip Morris, peering at me with one magnified eye from under the brim of his porkpie hat.

“That explains a lot,” he said. “I do hope you are not prone to violence.”

“Not ‘nothing’. What were you about to say? Not what?”

“Not that I should be offended if he were.”

“Nor should I be offended if you yourself were of the homosexual persuasion.”

“Who am I, a black man, to be prejudiced against someone merely for his sexual predilections?”

“Can we get that drink?”

“Yes,” I said. “And also, not to belabor the point, but as I think I mentioned earlier, I am in pain, primarily from my knees, and it hurts when I stand still like this –”

“Only when you stand?”

“No, not only, but more so I think, or hope, than if I could sit down. Also I’m starving, and I need to order food.”

“And if I may dare to address you as Porter?”

“Porter. That is your Christian name, is it not?”

I couldn’t help it. I sighed. He had seemed so eager to get a drink just a little while ago, and here we were, wasting time in this little passageway.

“Look,” I said, although I had no idea what I was going to say next, but that didn’t matter because he jumped right in again:

“Or,” he said, shouted really, we had both been shouting all along because of the noise of the bar, especially the loud jukebox music, except now it was more like what I think is called rhythm-and-blues-music, but still with a loud honking horn of some sort, “is it that you prefer that I call you ‘Mister’?”

“No,” I said, weakly, and feeling close to a moral and physical and mental collapse. “That’s not it. Again, please, believe me, I am not prejudiced against Negroes –”

“So you do not prefer that I address you as ‘Mister Walker’?”

“You don’t seem so sure of your own name.”

“Of course, except I never did tell you what is so special about Bob’s Bowery Bar.”

“Okay,” I said, but not brimming over with enthusiasm.

“Why, my dear sir, only that Bob’s Bowery Bar is the premier poet’s bar in New York City!”

“Forget about the San Remo, the Kettle of Fish, the White Horse!”

“Those places are for squares, daddy-o! Punks like Sandburg and Bobby Frost and Eddie Guest! And you may not be particularly hep but you’re not a square, are you?”

“Of course you’re no square! I can’t wait till you meet the other boys.”

“You, my good gentleman, are – ‘the brooding anti-social poet’!”

“Obviously! Every poet needs a niche, and that is yours. The brooding, solitary, ‘anti-social poet’, ha ha! Good one, Porter! Well done, I must say!”

“Now I shall have to read your epic poem! I’ll wager it’s wonderful! Just bursting with anti-social, brooding sentiments!”

“Do you think you could get me an author’s copy?”

“I’ll give you a copy of one of my books, in exchange like.”

“Oh, but I want to. Here –” he reached into his back pocket and brought out a slim paperback book, “I just happen to have a copy on me.”

He handed it to me. The book was very worn and dog-eared. The cover was a painting of some poor-looking Negroes sitting on the steps of a rundown building. The title, in letters painted roughly in black, was


Songs from a Negro Slum Tenement

And under that was


The cover price was twenty-five cents.

“Lucius,” he prompted me.

“My pleasure. Let me know what you think.”

“So, I know your book isn’t published yet, but when it is you owe me a copy.”

I put Songs from a Negro Slum Tenement in my inside jacket pocket.

“That’s it,” he said. “Put it in your pocket where you won’t lose it, and you can read it later.”

“I will,” I said, because you never knew, I might find myself trapped on a desert island someday with nothing else to read.

“You might think it not a fair exchange because my book is a slim pulp paperback from a house that mostly publishes cheap lurid  novels about chaps caught in webs of passion and despair, while your own book is coming out in hardback from a major publisher.”

“What? You think you’re getting gypped?”

“No, not at all, it’s just that I thought we were going to get a quick drink and we’ve been stuck in this passageway for what seems like forever talking nonsense.”

“Okay,” I said, “I’m sorry, not nonsense, it’s all been very interesting, but my legs hurt, my head hurts, I’m starving, my friend is waiting for me, and I just want us to get out of this hallway.”

“And get that drink?”

He had been holding my arm tightly in his through all of this, and now he gave it a pull, and led me out of the passageway at last and out into that barroom roaring with music and drunken shouting and laughter, churning with wet heat and the smells of tobacco smoke, unwashed sweating bodies, harsh perfumes, and, apparently, poets.

(Continued here, because it must be done, not only for the sake of the current generations but also for those of the distant future.)

(Kindly scroll down the right-hand column of this page to find a perhaps current listing of links to all other cybernetically-available chapters of Arnold Schnabel’s Railroad Train to Heaven™, now also available for a laughably small monthly fee on your Kindle™!)

Arnold's open mind and absolute politeness do present him with rare opportunities, and he's made true friends he probably would never meet in Cape May--or maybe he would. But he should take better care of himself. In a bar bristling with saints, poets, and Bohemians, physical necessity might impel him to invite Lucius, a regular, to eat with his friends.