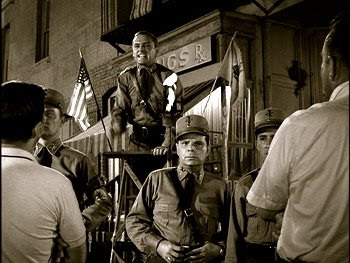 Previously in this Kresge’s Award-nominated epic, that charming spiritual adventurer Dick Ridpath found himself drugged, kidnapped, “harshly interrogated” for a week and then unceremoniously dumped off in Philadelphia’s Skid Row. Who would do such a thing to this decorated naval officer and friend of Frank Sinatra, Albert Schweitzer, the Dalai Lama and Arnold Schnabel?

Vice Admiral Hackington had haltingly reprimanded Pym for “excessive zeal” in the interrogation. The Vice Admiral claimed that he never intended for Ridpath to be tortured. Well, what exactly did he mean by “Make him talk” then? At any rate Pym had failed. At the end of that week of torture they knew no more about Ridpath’s “missing” six days in New Mexico than they did before. Which was nothing. Or did they not?

Ridpath had lied and lied and lied. And then he had fantasized out loud. Saying he had disappeared into his own brain, traveled into other dimensions, nonsense like that. Or so Pym had thought at the time. Torture, fear, drugs, the deprivation of sleep -- even the strongest man’s psyche would eventually split open like a rotten cantaloupe, and out would vomit forth all the fetid and chaotic horror of the unconscious. The subject would be nominally awake but still enmired the dream state, or, more accurately put, the nightmare state. Sometimes useful material could be extracted from this mental garbage of a lifetime, sometimes not. In Ridpath’s case there had indeed been certain trails, certain themes which might have led somewhere useful in time, but all that was moot after Hackington put a stop to the interrogation. The mad old fart.

Of course plausible deniability had been maintained throughout the “process”. Ridpath’s eyes had been taped shut from the moment he was picked up, and all the questioning had been done with spliced-up tape recordings of Yul Brynner’s voice. There was no way that Ridpath could prove that he had been kidnapped and brutally tortured by his own countrymen. And so it was no surprise when Dick soon decided to resign his commission (even though that driveling ass Hackington had put him up for the Purple Heart -- the official story being that Ridpath had been kidnapped by “foreign elements”).

The whole business was the only real failure on Pym’s record, and it rankled, he had to admit it. Of course Ridpath’s resignation did clear the way for Pym’s consolidation of his virtual command of Q Section, but still the failure rankled. And so Pym continued to keep tabs on Ridpath. He would get him someday.

Something big was up. Ridpath and Grupler. This Johnstone character. The killing of this motorcycle gang member. Those two CIA clowns, Philips and Adams. The intercepted radio messages. These odd activities at that air force base near Disdain. Ridpath was onto something big all right. Pym felt in his bones that it all went back to Ridpath’s famous “missing” six days in New Mexico back in January of ‘65. Perhaps some of the things he had said under torture were not mere ravings. Perhaps he was indeed in touch with (or even in league with) extraterrestrial beings. Or perhaps the extraterrestrial angle was a cover-up for something else.

So much was hidden, so much disguised in this wretched world. Countless agencies, factions, cults, organizations. No one knew the big picture and no one knew all the details. It was all chaos.


But Ridpath was the key to something, something big. Perhaps even Ridpath did not know what he was the key to. That blithe, handsome, talented, charmingly eccentric bon vivant Dick Ridpath. And Pym, yes, Pym, Alexis J.Pym, supremely neurotic, loathed and self-loathing, unloved and unloving, uncharming Pym, he, detested Pym, he would turn this key.

In a couple of hours Pym would be in New Mexico. He would rendezvous with Schotzbarger and Putcheko (undercover as a nice young couple named Baxter) and he would stick with Ridpath until the Ridpath enigma was resolved, once and for all.

What the hell, perhaps mad Hackington was right. Maybe Dick was indeed the advance man for some race of demons preparing to take over the world, or perhaps it was the Illuminati, or the Bilderbergers, the Lemurians, the Melchizedeks, Thoth, the Sirians, whatever. Pym didn’t really give a damn when you got right down to it. What did he care about the fate of the world? This was personal. This was a question of nailing Dick Ridpath, and then as far as Pym was concerned the world could go fuck itself, which it was constantly doing anyway as far as he could see.

(Kindly go here for our next exciting chapter. And please feel free to turn to the right hand side of this page for an up-to-date listing of links to all extant episodes of this unexpurgated serialization of Larry Winchester’s A Town Called Disdain™, a Joe Meek Production.)


Jackie DeShannon now sings about the way that Pym feels about Dick:

I wonder if Pym is currently employed in the Bush administration?

all the questioning had been done with spliced-up tape recordings of Yul Brynner’s voice.

So outlandish that there's no other explanation: it's gotta be true.

Or is it coincidental that I just recently watched "The Magnificent Seven" with Yul Brynner. Anyway, that dude had a cool voice.

I saw Indiana Jones for the first time last week, but that's besides the story. Howevern there was torture talk going on.

Right, poor Pym, now he fails again, like he always kinda seems to do. That Dick fellow would make a good James Bond.

Somehow, Manic, I can see Indiana Jones running into Dick Ridpath in some bar in Casablanca or Timbuctu.

And I suspect that Dick Ridpath was one of Ian Fleming's inspirations in the creation of James Bond.

Hey, thanks, Anon. The Searchers absolutely rocked this song.