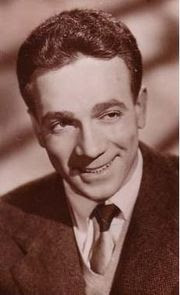 One of the best of the old-school anthology programs, this show was noted for its literate and often disturbing teleplays, its high calibre of acting, and its dark and moody photography.

Perhaps the best of its plays was “The Boring Man”, written by Tommy “Rags” Larkin and directed by Larry Winchester. Based on a “Cosmopolitan” story by the prolific Charles Bogle, “The Boring Man” starred Wally Cox (in what may well have been the role of his career) as a man who is so boring that people forget having met as soon as they meet him. He takes to wearing a name-tag at the large accounting firm where he works because no one can remember his name, but people still have to glance quizzically at the tag each time they meet him in the corridor. One day he catches the flu and calls in sick. When he comes to work a few days later he realizes that his absence at the office has gone completely unnoticed. He decides then and there that he doesn't really have to be there at all, since no one is aware of his presence anyway. From then on he goes to the office every morning, clocks in, and then leaves the building. He wanders about the city, goes to movies, visits the zoo, browses through bookstores, sits on a park bench and watches the passing parade of humanity (none of whom give him a second or even a first glance), goes home and takes a nap, and then returns to the office at five to clock out. On Fridays of course he stops by the paymaster on the way out to pick up his weekly paycheck.

I won’t give away the ending.

This series (produced by Phil Leotardo and hosted by that amiable and quintessentially noir thespian Dane Clark) lasted only six episodes. It was just too weird for its time, and perhaps too weird for any time.


(For links to many other "Great Lost TV Shows" please check the right hand column of this page.)
Posted by Dan Leo at 5:59:00 PM

Oh my God, I actually remember that epsiode with Wally Cox. One of the most disturbing things I've ever seen. Of course I was only about eight or nine years old at the time, but still. I would love to see it again.

I've exchanged e-mails with Rags Larkin about this series -- he wrote or co-wrote four epsisodes, including a couple that never aired -- and he says the original 35mm negatives are still extant and in excellent condition, and that Phil Leotardo's son Joe is actively pursuing a cable deal to air all six original episodes plus at least six more that were never shown. Joe would also like eventually to put out a box set on DVD. Let's all keep out fingers crossed!

lamont cranston had a voiceover on this series....unfortunately it didn't take place til the 11th episode. According to internet rumour, no copies have ever circulated, he said "The unwitnessed life is the uncirculated life..." Shame we never saw the series realized out. In recent days, the series was reimagined as 'John Doe' starring Dominic Purcell...but, once again, canceled by the Powers that Be...

Ah, Pierce, that famous 11th episode! Entitled "The Shoe", and also starring Wally Cox, and -- get this -- purportedly featuring Wally's homeboy a certain little-known character actor by the name of Marlon Brando in a very rare TV appearance. Let's just hope that Joe Leotardo pulls off that cable deal.