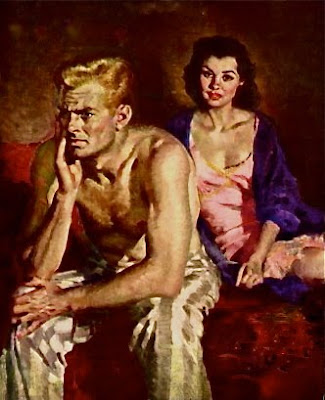 In our previous episode of Larry Winchester’s praised (“Quite simply, the greatest novel ever written” -- Harold Bloom) and reviled (“The Mein Kampf of Liberal Fascism -- Jonah Goldberg) sprawling masterwork, Dick Ridpath somehow found himself, clad only in his old kimono, in the boudoir of Hope, clad only in a diaphanous nightgown.

He finds himself quite overcome.

A hazy shade of September in 1969, some several miles outside of a town called Disdain in a land of enchantment...

That falling outward feeling. He’d felt it first when he was eight years old, walking down the aisle to Communion in St. Pat’s in Philadelphia, this feeling that he was leaving his body. He had grabbed onto the arm of the kid in front of him, and the kid turned and looked at him like he was crazy. Dick said something to the kid, something stupid, mundane, anything, something to pull himself back before he slipped away entirely and forever. And he felt himself coming back, and he sighed as if he had just crossed a tightrope over some yawning great bottomless gorge.

Once it happened when he was lying in his room listening to Fibber McGee on the radio. He felt himself slipping rapidly away, and he ran (with what seemed like a comet’s trail of his own self trailing behind and above him) into his father’s den where his father was reading a book, and he babbled something and his father said, “Are you all right?”

As Dick became more adept at pulling himself back he also learned to tell the warning signs and how to avoid the attacks.

And so he grew up and never quite went insane, and by his early twenties he felt he had himself under control. The trick was simply not to let his mind drift too far toward a certain place where it became all too aware of its utter aloneness. He was already quite aware that he was alone, but to be too aware was to open the doorway to, and step into, insanity.

When Admiral Quigley first asked him to experiment with LSD Dick went right ahead, and, very much to his surprise, he loved the experience. (Some of the other guys had a terrible time, and in fact a couple had been turned into gibbering wrecks and had spent months in the psych ward at Walter Reed as a result.) But even at the peak of a “trip” Dick kept away from, and was able to keep away from, that awful place of utter aloneness.

Some years and dozens of LSD and mescaline trips later, along came Daphne. That glorious beginning of their affair, and she read an article in Life about LSD and Ken Kesey and his mob. She wanted to try it. He happened to have some excellent government-issue stuff stowed away in his old seabag for a rainy day. They gave it a go, and as they were peaking they started making love. He was on top of her and she was staring deep into his eyes. As many times as he had taken hallucinogenic drugs he had never done so while having sex, let alone while having sex with Daphne, which was already an amazing experience in and of itself, and he began to have that feeling again, but instead of floating away he was falling down into those grey eyes and he was not afraid, and it was like all the universe was passing through him into her and up out of her eyes into his.

And so they experimented, taking acid together, trying to break through into some permanently accessible exalted state.

They discovered that they could go even further than they had gone that first time. He would let himself go, falling away inside her, and these journeys into some disembodied almost but not quite egolessness became longer and deeper, swooping wild soaring flights, and Daphne was always there flying right along with him, in him, and he in her, until one time he went in so deep that suddenly she was not there. It had happened. He was alone, horribly alone and all in darkness, and there was no going back ever and not even the hope of extinction. And he howled and howled but the howling was silent, all was silent and black.

He gradually awoke and became aware of his body again to realize he was huddled in a fetal position in a dark closet. He got out of it and Daphne was over on her bed, sleeping. It had been the most horrifying experience of his life, and he had seen a good deal of horror in his life.

When he talked about it later with Daphne she listened quietly and then said, “You shouldn’t have been afraid. You should have gone on.”

She pause for a few seconds and then she said, “There might have been.”

But that had been enough for him. He knew how far he could safely go now, and before he reached that point he always forced himself back. He would neither go there willingly nor let himself be pushed there. If he went to that black place again there was no guarantee he would come back, and that place was the one place he did not want to get stuck in. If there was something beyond that place -- and he was pretty sure the only thing beyond it was oblivion -- he would just have to reach it by going around the black place, and if that were not possible he would simply have to live and die the ignorant unachieved fool that he was.

But now for some reason, standing here caught in the scary but thrilling charm of this mad little witch Hope, he wanted to let himself go there, to that place. He was tired, tired of holding back.

But it didn’t seem the thing to do, really. Not here and now with this poor girl. He felt he’d better speak and break the spell before it was too late, or perhaps he would fall, willy nilly, fall away into those bottomless brown eyes.


Hope had asked what?

Why were he and Daphne here.

His voice sounded stale and flat, the snapping of a dead twig on a dead branch of a dead tree, but he knew that by speaking he had pulled himself back, and he could already feel the sweat on his back cooling.

A sighing moment passed, and he was actually on the verge of taking a deep breath and going into the whole tedious transistor radio business for the second time that day, but then she simply took her hands away and said, “Are you going to the barbecue?”

He could feel where the energy from her hands had been cut off from his hand, and suddenly his hand felt cold, and separate.

(Click here to go to our next enthralling chapter. An up-to-date listing of links to other episodes of Larry Winchester’s A Town Called Disdain appears on the right hand side of this page.)
Posted by Dan Leo at 5:20:00 AM

Until now I thought Larry Winchester was wild and funny, with a gift for writing about violence. It never occurred to me he could so clearly represent a visionary's close calls.

Larry's one deep dude, Kathleen. And the charges that he is a liberal fascist are totally groundless!