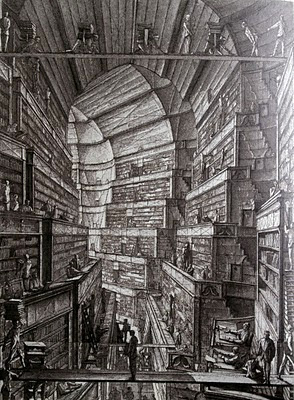 We left our heroes Arnold Schnabel and Big Ben Blagwell (with their somewhat dubious companion Mojo) in a gallery way up high in the mammoth library of Madame Chang, somewhere in the dockside district of old Singapore.

Ben resumes his narration with his usual flair…

“How sweet it is, of a brisk autumn weekend, to barricade oneself in one’s room and to open up with trembling fingers that just-purchased latest volume of Arnold Schnabel’s masterwork.” — Harold Bloom, in The Catholic Standard and Times.


“Look, Arnie,” I said. “If you want to just skip it, we can lam out of here right now, I mean after we load up with some of Madame Chang’s swag that is —”

“Yeah, dépeche-toi,” said Mojo. He was leaning his head over the rail and looking down. “I think I see those two starting to stir down there.”

He opened up the book again and started leafing through the pages. I took a drag of my Sweet Caporal and looked down through all those circling galleries of shelves packed with books, down to where Madame Chang and Mojo were still lying on their backs like one big bug and one small bug. They were definitely stirring a bit now, you could tell even from way up here. I tapped my cigarette with my finger and watched the ash float slowly downward in the dimness, then I turned and looked at Arnie again. He was still turning the pages of his book, and he wasn’t exactly going slow, but he wasn’t zipping right along either.

Meanwhile my stomach was growling I was so hungry.

“So, look, Arnie,” I said, “I don’t want you to fall all over yourself now, but just don’t take forever either.”

“Well, it’s probably not this volume, anyway,” he said.

“Then find the right one,” said Mojo.

He put the book back, took out the next one, it was titled Railroad Train to Heaven, Volume 2: This World or Any Other World.

Arnie started looking through this book, and now, besides being hungry and thirsty, I was really starting to get bored. If there’s anything more boring than watching someone else read, I don't know what all it is.

I took a gander upwards, and the funny thing was that those book-filled galleries just kept on going up and up, up and up, and you still couldn’t see the ceiling of this joint, just what looked like a black cloud or a black hole way up there. If we were at the S’s on this level, we couldn’t be too far below the Z’s, so I wondered what all those other books were up there. And if the books down here were all the books that had been written but never published, then maybe all those other ones up there were all the books that had never been written and never would be written. To tell the truth I didn’t care.

I looked over at Arnie again. He was still kind of nervously leafing through the same damn book.

This was just getting too excruciating, even for me who had once been buried up to my neck in the desert sand by some Arabian bandit vixens, so I figured I’d try to help out and move things along a bit.

I brushed past Arnie, and looked at the next few volumes.

Railroad Train to Heaven, Volume 4: The Fly & I.

Then there was Railroad Train to Heaven, Volume 5: Two Weeks in a One Horse Town.

That one sounded good, so I took the book out and opened it up.

I flipped through it a little, and, hey, wouldn’t you know it, I was in it. Me, Big Ben Blagwell. And there was Mojo, and Maxine, too. I flipped through a bunch more pages, and sure enough, there was Madame Chang, and Futuyama. And there was me again, with Mojo on my shoulders riding piggyback, me climbing those iron stairs, huffing and puffing and sweating like a stoker in a tramp steamer crossing the Sargasso Sea in August, following Arnie up and up through those galleries all the way to the S’s.

And here was the part where we all were right now.

It was kind of creepy really.

“Arnie,” I said, “listen to this,” and I started to read, aloud: “’And here was the part where we all were. It was kind of creepy really.

Or, more accurately put, I — I being “Arnold Schnabel”, not Ben Blagwell, into whose world I had fallen and in whose story I had been relegated to a secondary, or “sidekick” role, as opposed to the leading role I had been accustomed to play in what I thought of as my “real” life — I was back, if not in my own world, then at least back — in the guise of the preposterous poet “Porter Walker” — in the world of Gertrude Evans’s novel Ye Cannot Quench, which after all was only one world removed from that world which I considered, however laughably, the “real” world.

I was sitting at Mr. Philpot’s desk, in his book shop, holding a book open in my hands, and I was reading, aloud, the following words:

“…I started to read, aloud, and the weirdest damn thing happened, namely —”

I quickly closed the book, and laid it down, face down, on the table.

“Hey! Why did you stop reading?” said Thurgood. He was holding a cigarette in his hand, and it was almost burnt down to the end.

I stood up, almost knocking my chair over. I was sweating, and short of breath. My knee hurt. I had forgotten about the sore knee.

Mr. Philpot was sitting there on the other side of the desk, smoking his corncob pipe, and smiling.

“Did you really find my book that bad?” said Thurgood. He looked at his nubbin of a lit cigarette, then tossed it into the ashtray on the desk without stubbing it out. “Well? Did you?”

I was sweating quite profusely. What else was new?

“I don’t think he liked your book, Thurgood,” said Mr. Philpot, sucking on his pipe.

“Fuck him then!” said Thurgood. He grabbed up his book in both hands, held it to his chest. “Everybody’s a critic! Well, fuck you, buddy! Y’know, I haven’t read even a word of your goddam book yet, and I don’t intend to, but you know what? I’m going to write an absolutely scathing review of it, and I’m going to call it a pile of shit, and I’m gonna send the review in to the Village Voice, and I’ll bet they publish it, because their book review editor owes me ten bucks! So fuck you! What was wrong with my book, anyway? What didn’t you like about it?”

“Wait,” said Thurgood. “You really thought it was good?”

Mr. Philpot was still smiling behind his pipe, and I got the impression he was biting on its mouthpiece to keep from letting out a yell of laughter.

“So how would you describe it?” said Thurgood.

“My book,” said Thurgood. “How would you describe it? Like in one word on the front cover.”

“Only interesting? Not gripping? Not — riveting?”

“And gripping?” said Thurgood. He was wide-eyed. I guess this is the way authors get about their books.

He still held the book against his chest with one hand, and with his other hand he was caressing its back cover, as if it were a baby.

“No, that’s really quite all right,” he said. “What’s stunning? A début novel is stunning. But this is not my début, far from it, this is like my fourth or fifth book, I forget, something like that.”

“Now you can call a book a ‘stunning return to form’ I guess, but that’s just not the case with this book, because that phrase would imply that I had been off my form before this one, but that’s simply not true, because all my novels have been great, all four or five of them, or is it six.”

He settled back in his chair, still holding the book against his chest, and caressing it gently. And now he smiled. It wasn’t a pretty sight.

“Gripping, too,” he said. “Riveting. Spellbinding.”

I had to get out of there.

“Where are you going?” said Thurgood.

“I have to find a friend of mine.”

I almost said his real name, but I caught myself.

It seemed so much easier just to say “Josh”.

So much easier by far than saying that I was looking for the Son of God.

(Kindly look to the right-hand column of this page for what might very possibly be an up-to-date listing of links to all other officially-released chapters of Arnold Schnabel’s Railroad Train To Heaven©; nihil obstat, the Most Reverend John J. “Bishop Jack” Graham, D.D. Now published concurrently in the CollingswoodPatch™: “What the New York Times is to the rest of the world, that’s what we are to South Jersey!”)

That was indeed a stunning return--not just to "Ye Shall Not Quench" but to Arnold, too.