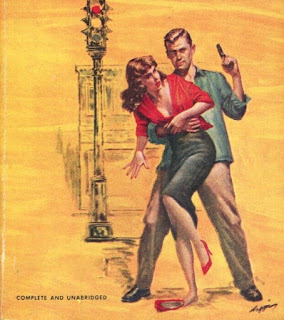 Ever since he was fourteen years old, the only thing Billy Baskins ever wanted to be was an elegant international assassin. But how did you go about becoming one? He scoured the magazines at Doc Williams’s pharmacy for hints about how to break into the business, but to no avail.

“Billy, stop reading those magazines and finish sweeping up,” Doc Williams would say. “I pay you for sweeping, not for reading magazines.”

For twelve years Billy worked at Doc’s, and when he had saved up five hundred dollars he figured that must be enough to start his new career on, so he gave his notice and took the bus to New York City, which he figured was a heck of a lot more likely a place to start a career as an international assassin than Wheeler’s Corners.

He got a one-room apartment at Bleecker and the Bowery, above a bar called Bob’s Bowery Bar. There were a lot of shifty-looking characters in that bar, and something told Billy that this was as good a place as any to start his new career.

He began going into the bar at four in the afternoon, when they started their two-for-one happy hour, and he always ordered the same thing, a glass of their “basement-brewed” house bock. He would sit there and try to look mysterious, and sure enough, one day this woman started to talk to him. She wasn’t really pretty or glamorous like the dames in the magazines, but then Billy knew he wasn’t anything to write home about either, so who was he to be critical?

“Sure,” said Billy, and she ordered a Tokay wine.

After some small talk she said, “So, what’s your line, Billy, if you have a line?”

“I’m not so sure I should tell you,” said Billy.

“So what do you charge to bump somebody?”

That was a tricky question. He hadn’t actually thought about how much he should charge. The elegant international assassins in the magazines got fantastic sums for their work, but, after all, Billy was just starting out.

“I guess I could do a job for fifty dollars,” he said.

“Fifty? I ain’t got fifty. Would you do a job for a double sawbuck?”

Twenty dollars. That wasn’t much, but, then again, maybe it would be worth it, just to get his feet wet.

“I guess I could do a job for a double sawbuck, I mean, for a friend.”

“So how about you bump my old man for me. He’s mean, and he beats me, and also he’s got a life insurance policy, and when I get the insurance money I’ll give you another thirty, which would make it fifty altogether.”

“Well, okay, but only because you’re my friend. What did you say your name was?”

It was a start. Everybody had to start somewhere, even international assassins. After a few more rounds, Marie admitted she didn’t have a double sawbuck, so she asked Billy if he would do the job on account. Billy said okay, because he was a little drunk, and also because he thought maybe Marie would make savage love with him, like the dames in the magazines always did.


– The Last of the Elegant International Assassins, by Horace P. Sternwall, a Midway Books “paperback original”, 1952; one printing, never republished.