"The Preacher Wore a Sixgun" 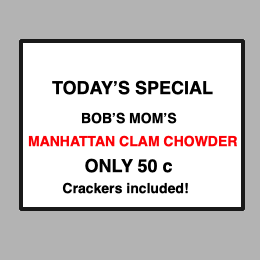 The very next day after seeing the western triple feature at the Vauxhall, Addison dropped into Bob’s Bowery Bar for happy hour, and sure enough, there was Tommy McCarthy, the big river boss, sitting on his usual stool down near the rest rooms – and the stool to his left was unoccupied! Quickly Addison went over and claimed the seat before some other chancer could grab it.

Tommy was smoking a big cigar and staring into his bock, perhaps deep in thought.

Tommy went back to staring into his bock, and then he took a good drink of it, finishing it, and shoved the glass forward.

Bob came down and picked up Tommy’s glass.

Bob stared at Addison. In the two or three years this bore ass had been coming in here, he had never bought anybody a drink, and it was hard enough to get him to pay for his own drinks.

But Addison brought out a crumpled dollar bill and tentatively raised it chest height, so Bob went down to the bock tap.

Tommy said nothing, just sat there smoking his cigar.

When Bob brought the two bocks over Addison held out his dollar bill.

Bob took the bill and went to the register, but before he rang it in he held it up to the light of the electric Rheingold sign just to make sure it was kosher. It looked all right, so he rang it in and brought the eighty cents change back to Addison.

Tommy had already drunk a quarter of his bock, and now he put the glass down and turned to Addison.

“If you’re looking for a job, forget it. I got experienced men with families who ain’t gettin’ enough work.”

Tommy stared at Addison with those steely blue eyes, and then he turned back to his bock.

“By the way, Tommy,” said Addison, “on your recommendation I went to see an Audie Murphy film yesterday.”

“It was a film called Ride a Dead Horse,” said Addison. “And you know what? I thought it was simply marvelous.”

Tommy continued to stare at Addison. Was he going to send Addison flying off his stool with one back-handed swipe of that enormous left hand? Addison braced himself for the blow, but finally Tommy said, “That was a good movie.”

“I’m so glad you agree,” said Addison. “I thought the metaphor of the dead horse was really quite striking, and –”

“It was a good one,” said Tommy. “But ya know what was a really good Audie Murphy?”

“The Preacher Wore a Sixgun.”

“Sixgun. You might think it was Audie who was the preacher who wore the sixgun, but it wasn’t. That was Dan Duryea. But Audie played the guy who thought the preacher killed his brother. But it wasn’t the preacher. It was Broderick Crawford, the big deal rancher.”

“It might come around again. Every once in a while they bring these movies back and you can catch ‘em on a double or triple bill.”

“I’ll look out for it. The Preacher Wore a Sixgun.”

“If you hear it’s playing anywheres, let me know.”

“I’ll do just that, Tommy. Scour the movie listings every day.”

“You don’t got to scour the listings, but if you notice it’s coming around, you let me know.”

“Maybe we could go see it together?”

Tommy stared at Addison again. Had Addison gone too far? He always went too far. Either that or he didn’t go far enough. Once again he braced himself for a blow from that enormous fist.

“I hope you ain’t one of these guys talks through a whole movie.”

He raised his glass and emptied it, shoved the glass forward.

Bob came over and picked the glass up.

“What was your name again?”

“Well, they all call me Addison here, ha ha, but my real name is –”

“Give Addison another bock too, Bob,” said Tommy, and he turned to Addison. “You want a shot?”

“Yeah. I’m gonna have a shot of Schenley’s with my bock. You want a shot, too?”

“Two bocks, two Schenley’s,” said Tommy to Bob, and Addison quickly polished off his own glass of bock.

This would show everybody.

This would show them.

Tommy McCarthy was buying him not only a bock, but a shot of Schenley’s!

This would show them all.

{Kindly click here to read the “adult comix” version illustrated by the one-and-only rhoda penmarq…}
Posted by Dan Leo at 11:06:00 AM