"The Testament of Joey Ryan", Part One 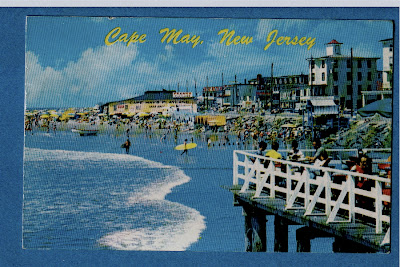 We interrupt our regular programming to bring you this special three-part presentation, “The Testament of Joey Ryan”, written of course by one Joey Ryan. Originally published in three successive issues of the Olney Times in 1969, we can thank our intrepid correspondent Pierce Inverarity for digging this one out of the basement files at the Oak Lane Library.

I
My exploit seems to have captured the interest of the nation. What interests the nation however is of little interest to me. What interests me is the money I am receiving for writing this article. Also, I must admit to a nagging, no doubt despicable compulsion to “tell my story”. But the money is reason enough to tell it.

You are doubtless acquainted with the bare bones. Five summers ago I went with my mother on Assumption Day to Cape May, New Jersey, to step into the blessed waters. My mother after her dip returned safely to our blanket, but turning, she saw me not. Searching, she did not find me. I was declared lost and presumed drowned. Five and a half years later, one night in the dead of winter, a Cape May policeman found me sleeping burrowed in the sand under Frank’s Playland, naked but for a crude wrapping of newspapers and a tattered CYO t-shirt. I was taken into custody. The next day my mother arrived, the Mayor ordered vagrancy and public indecency charges dropped, and my mother took me on the bus to our modest row home in the Olney section of Philadelphia.

I told the police only my name and address, and I refused to speak to the news media, even when such notables as John Facenda, “Wee Willie” Webber and Tom Snyder begged me for interviews.

It is not easy to speak the truth. And why, I thought, compound my lies, my half-truths, my mumbling, with reporters’ lies, their straying attention, their perhaps faulty hearing? But here perhaps I wax grandiloquent: I was, more likely, merely too embarrassed to speak.

Nevertheless, the people at the Olney Times are paying me, and paying me well ($225!) to tell my story, so here it is. How much of it is lies no one will ever know, not even, doubtless, myself.

All my life I had no friends. Torturers and enemies, but no friends. I did have my mother, my religion, my books. Along about my freshman year of high school I began to lose my religion. Puberty like an enormous hot viscous flood flowed over me, my religion struggled for air, it thrashed about, it drowned. And, when puberty receded with its wreckage, the bloated pale corpse of my childhood religion bobbed away with it. As once I had spent hours straining to adore a a Christ Whose Presence in the gleaming gold starburst of the monstrance would not give me a single word or sign and thus grant me ecstasy, now I spent hours lusting after females I could only dream of touching, and who no doubt if given the opportunity and even great sums of money would not even dream of touching me.

I soon resigned myself to frequent self-abuse, to a constant state of mortal sin. I continued to go to Mass with my mother each Sunday, but Saturday afternoons when I left the house supposedly to go to Confession I would pass the church and walk about in Fisher Park, sit on a bench, look at the multitudes of decaying or utterly decayed fallen leaves lying still or scattered in mounds, listen to the wind rustling the leaves living and dead, listen to the chaos murmuring, roaring within my head and without.

Or sometimes I would just go to a matinée at the Fern Rock if they were showing something that looked good, like a good Roman movie like Return of the 300 Spartans or a western like Six Bullets For Curly Russell.

At Cardinal Dougherty High School, I was a mediocre, lazy student, and I made no close friends and participated in no extra-curricular activities except the CYO -- the Catholic Youth Organization -- and that was only at the behest of my mother.

I often felt nostalgic for the religious fanaticism of my youth -- at least then life had held hope. Now, with religion replaced by continual lust, I had little to hope for. I was absolutely incapable of even speaking to a female within three or four decades of my own age, with the exception of nuns of course. My body was flaccid, thin, wraithlike, almost ectoplasmic, my skin was pale, my hair weak and bland; I looked slightly dead; I possessed none of the social graces.

I might mention that my mother, an Irish immigrant of great piety, had always expected me to become a priest. Perhaps she saw my congenital strangeness as an indication that I was not intended for the secular life, as indeed I am doubtless not. As high school graduation approached I saw little reason for disappointing her so I allowed her to send away for the appropriate forms and to arrange interviews with priests; soon I found myself accepted at St. Odo’s Seminary, in Wyndmoor.

At the orientation for the seminary I found many different types, including a few who were seemingly strongly influenced by their mothers in entering “the Sem”, but none, apparently, like myself, who were doing this only because they had nothing else to do, believed in nothing, and were willing to be pushed in whatever direction they were pushed.

After the first couple of weeks it became obvious even to me that one of the two long seminarians’ tables in the refectory was occupied by “straight”, ostentatiously masculine would-be Pat O’Briens, while at the other sat homosexuals running the gamut from heartily discreet to flamingly handkerchief-waving. I realized this all at once somehow one lunch after I had been sitting at the “gay” table quite unwittingly since the beginning. I am not a worldly person, and things obvious to others are often the deepest mysteries to me. Anyway, I was deeply shocked, or rather as deeply shocked as I was capable of being shocked, which is to say not very deeply I suppose. I had familiarized myself in my vast readings with the horrors of history, I had even in high school written a trashy pustulent historical novel called The Warrior Pope. I quickly identified the situation as but a small seediness in the sprawling tapestry of Church history. That evening at supper I sat at the “straight” table.

After grace the young man next to me, a big nervous brute called Reilly, said, “What’s the matter, have a tiff with one of your boy friends?”

I said nothing, but picked up a bowl of steaming cabbage and emptied it onto his head.

I was saved from destruction by others at the table, but later that evening I was ordered to see Monsignor O’Mara, the head of the seminary, in his office.

“Why are you here, Joey?” His face was red, the pores gaping, doubtless to allow the easier evaporation of the fifth of Old Crow he was reputed to consume daily.

“I am here so as not to disappoint my mother. Among other reasons.”

“But do you not feel, yourself, that you have a vocation, a direct calling from God to be His priest?” He seemed very tired.

“Well, then, Joey, perhaps you shouldn’t be here.”

“Perhaps, monsignor, I shouldn’t be anywhere.”

“Don’t be a wiseguy, Joey. Nobody likes a wiseguy.”

“I have never been liked. If I wish to be a wiseguy I see no reason why I should not indulge myself that pitiful pleasure.”

And so he went on, perhaps wisely, that is to say with words of wisdom.

The next morning I left the seminary and returned to the familial row home in Olney. I took the train into Suburban Station, took the Broad Street Subway to Fern Rock Station, and the Y bus to home. It was a bright fall morning. The streets were almost empty. Students were at school, workers at work. I shared the bus mostly with old women with shopping bags. I got off at the corner of Fifth and Mascher and walked up to our house. The door was unlocked, and I let myself in. My mother was in the kitchen, drinking tea. I had phoned and “told her the score”. I sat down at the table and she poured me a cup.

“Yes, but what am I meant for?” I have always been a self-pitying wretch.

I had never worked a day in my life.

“Perhaps Dad could get me into his firm,” I said. This spoken weakly, a sound like a rain-soaked squirrel running over to a peanut shell he has no doubt is empty.

“Oh you’re not serious, Joey. You could never do figures.” My dad was an accountant.

“Perhaps I could sweep up, or attend the lavatory.”

“No, Joey, you must find your own way in the world.”

This saga needs to be published and I for one, knew you, Mr. Leo would be the appropriate venue. I only hope that Your Readership will appreciate the saga of J.R. Complete with all his moral and personal travesties. Never forget, as Feyerabend tells us..."The living brain is already connected with a most sensitive instrument - the living human organism."

Ah, Pierce, we can always count on you to raise the discourse within this site to a more exalted level.

Unlike some other people I could name.

What was wrong with John Facenda? Isn't he the voice of God?

Indeed he was. However, John didn't pay people for interviews, so he was out.

Hey, anon, thanks for the typo alert; I fixed it up, with a tip of the Leo lid to you.

I think I had one too many ice cold bottles of Ortlieb's while transcribing Joey's tale.