“A Town Called Disdain”, Episode Twelve: an unpleasant encounter on the road, continued 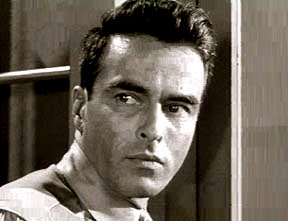 In our previous episode of Larry Winchester’s A Town Called Disdain (a David Susskind Production): Poor Harvey, still his first day back from Vietnam in his hometown of Disdain, NM (he’s already had to kill one man) and now here he is on the side of a desert road in a white Thunderbird convertible with this beautiful lady Daphne “Smith”, trapped by a motorcycle gang called the Motorpsychos, with their evil leader Moloch standing on the hood of the car.

Everyone turned to see a bearded behemoth in a Nazi steel helmet hopping and dragging himself on only one good leg through the cordon of motorcyclists.

“What is it, Crackle?” said Moloch, with testiness discernible in his tone.

It was true that his left leg was dragging behind the man, the foot at an alarming angle vis-à-vis his massive torso.

“Lookit! She run into to me and broke my leg!”

“And,” said Daphne, now seemingly recovered from her knock against the steering wheel, “you ran into me, you fool!”

She picked her bag up from the car seat and fished out her cigarette case.

“I’m sorry you broke your leg.”

Daphne offered Harvey one of her cigarettes and Harvey took one.

“I mean I appreciate your concern,” said Crackle. He had now dragged himself and his shattered leg up next to the front of the car. “I do appreciate it --”

“Do not ever interrupt me whilst I’m speaking again.”

Harvey lit up his and Daphne’s cigarettes with his Zippo.

“So please shut up.”

“But Moloch,” said Crackle quickly, “won’t you let me just rape her?”

“I will. I surely will, sir. I’ll just stand right here and cheer you on whiles you go first, but --”

“Put your hands on the bonnet.”

Crackle hobbled up and put his hands on the hood, and Moloch reared back and viciously kicked the steel toe of his boot right into Crackle’s mouth, sending his helmeted head flying back like a soccer ball with his enormous body tumbling head over heels behind it into the harshly lit dust, where he lay crumpled and still.

He turned again to gaze down at Daphne and Harvey, and a great burst of shouting, whistling, and applause burst out as he unzipped his fly and yanked out his penis.

“Now,” he said, “the only question is with whom to begin. The young lady is indeed most attractive.”

“But the soldier boy is somewhat alluring as well, in a youthful Montgomery Clift sort of way.”

“Now you just hold on a minute, man,” said Harvey.

“Oh, yes, brings me back to my days at Eton,” said Moloch, stroking his penis with one hand and his chin with the other. “I think I might just go for the soldier boy first --”

Suddenly a car pulled up. No one had noticed it above the racket of the idling belching motorcycle engines.

It was Dick, in Big Jake’s red Cadillac. Big Jake was in the car too, but he was cowering fatly down in the footspace.

Dick cut the ignition, neatly vaulted over the driver’s-side door, and strode toward the Thunderbird.

He was smiling, and his even white teeth fairly glowed. Actually he was just completely wasted on the acid now and riding on the moment like a surfer on a big wave, trying not to wipe out.

“Hey, fellas, fun’s fun, but that’s a borrowed car there. Excuse me. Sorry.”

He edged sideways through a couple of the bikers and then deftly hopped over Crackle, who lay in the dirt now moaning and shaking his head and trying to push his massive body up.

Moloch still stood on the trunk of the Thunderbird, stroking his penis with his right hand. Dick came up right next to the car, and put his hands in his shorts pockets. He had to admit that Moloch had a big johnson all right. But it seemed to have some sort of tattoo on it, as well as numerous scars and pimples and several open sores.

“Hi there,” said Dick. “Look, really, if it was my car I wouldn’t care so much, but this baby happens to belong to a very old friend of mine from the Naval Academy, and --”

He was very much aware of the oddness of what he was saying but the words were just pouring out.

“I have changed my plan slightly,” he declared. “I think instead I shall bugger this imbecile first!”

Dick smiled and nodded his head and then chuckled, “Now wait a minute, buddy! I’m as broadminded as the next guy, but really --”

Moloch continued to stroke his ravaged penis as his men now began chanting the “Oh we yo, yo rum” marching song from The Wizard of Oz.

“Oh, for God’s sake,” said Daphne, tapping her ash into the dashboard ashtray.

Dick, still smiling, still with his hands casually in his bermuda shorts pockets, turned and looked around at the chanting bikers and then back at Moloch, whose johnson was getting really big now. He saw that the tattoo read “BITE ME”.

Back in the Cadillac Big Jake still huddled quaking in the footspace. He wanted to jump quickly into the driver’s seat, turn the ignition on and slam it the hell out of there, but he was afraid that Moloch would be mad at him if he did.

“Well, fella," said Dick to Moloch, “I gotta say that is one hunk o’ horsemeat you’ve got there, but the fact is, tonight I’m just not in the mood.”

“Too bad,” said Moloch, breathing heavily, his half-closed one good eye behind his mirrored shades roaming from Dick to Daphne to Harvey and back again, like a little boy who doesn’t know which Christmas present he really wants to open first.


“Yeah, that is too bad,” said Dick, and then his right hand came out of his pocket with the little .38 revolver and he held it at arm’s length right against the purple uncircumcised head of Moloch’s penis.

(Click here for the next thrilling installment. Kindly turn to the right hand side of this page for links to other episodes of Larry Winchester’s A Town Called Disdain, and to links to appreciations of many of his fine motion pictures, all of them available on DVD for a modest fee, with special discounts to members of the armed services, veterans, senior citizens, and libraries.)

What makes this story so great are the nice subtle touches, like in episode eleven when you said "Wichita Lineman" was on the radio. It wasn't "Galveston" or "Gentle on my Mind", but ""Wichita Lineman". David Lynch would be proud.

You know what I like? Besides the dialogue, of course, and the pace, which proves its existence is a priori cinematic? The adverbs. Don't laugh. The adverbs here are stellar.

Thanks, Tedster, I was thinking of using "Pop a Top" by Jim Ed Brown, but Dan said he'd never heard of the damn song so we went with "Galveston". I always liked the words to "Pop a Top" though:

Pop a top again,
I just got time for one more round;
Sit em up my friends,
Then I'll be gone
Then you can let some other fool sit down.

I'd like for you'd to listen to a joke I heard today
From a woman who said she was through and calmly walked away.
I'd tried to smile and did a while, it felt so outta place;
Did you ever hear of a clown with tears drops streaming down his face?

Pop a top again,
I think I'll have another round.
Sit em up my friend
Then I'll be gone and you can let some other fool sit down.

Home for me is misery and here I am wasting time,
'Cause a row of fools on a row of stools is not what's on my mind.
But then you see her leaving me, it's not what I prefer,
So it's either here just drinking beer or at home remembering her.

Pop a top again,
I think I'll have another round;
Sit em up my friend
Then I'll be gone and you can let some other fool sit down.
Pop a top again.


Maybe we'll get the tune in later in the book, or in the movie version.

And, Kathleen, I hearti(ly) and sincere(ly) thank you for the compliment. In fact, Dan and I were just going over the copy again and I bold(ly) inserted one or two more adverbs!

All the best,
Larry Winchester