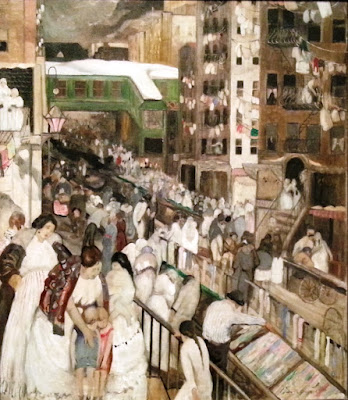 Janet was resting her dogs up on the arm of the couch and reading one of the leftover movie magazines that Doc Schwartz down at the drug store always saved for her when Bub and Bubbles came in the door, and Bub had a bloody nose.

“It was them boys on the corner,” said Bubbles. “They said we had to pay them a nickel each every time we walked past the corner from now on, and Bub said we didn’t have no nickels, and even if we did we still wouldn’t give ‘em nothin’.”

“Didn’t have ‘any’ nickels,” said Janet, “and ‘wouldn’t give them anything’.”

“That’s what I said,” said Bubbles.

Janet put down the Photoplay and swung her legs to the floor.

“Get my apron, Bubbles. I got to go to work. Bub, you go in and wash your face off, and then you both come with me.”

A few minutes later the three of them walked down to the corner of the Bowery and Bleecker. A half-dozen young boys in t-shirts and blue jeans were slouching there.

“Which one of you tough guys punched my kid brother in the nose?”

“It was me,” said the kid named Tommy. “What’re you gonna do about it?”

The kid came closer, all cocky. Janet stood there with both her hands in the pockets of her waitress apron.

“So you like to beat up little kids half your size, huh?”

“This is our corner. Anybody walks by this corner gotta pay the toll.”

So quick that nobody saw it coming her right fist came out of her pocket with the brass knuckles and hit Tommy square in the nose. He sat down on the pavement, holding his hands over his nose with the blood pouring down, and he was sobbing.

“Anybody else want to collect the toll?” said Janet.

Nobody said a word, and Tommy continued to sob.

“Anybody touches my brother or sister again, I come back here with a gun,” she said.

Nobody said anything, Tommy sobbed.

Janet turned around and walked away, and Bub and Bubbles went with her. Outside Bob’s Bowery Bar she said, “There’s tuna macaroni salad in the icebox, and put the leftovers back in the icebox when you’re done and wash your dirty dishes.”

“I don’t have ‘any’ gun,” she said. “But those little schlimazels don’t know that.”