“Railroad Train to Heaven”, Part Fifty: "Kings don't mean a thing on the street of dreams..." 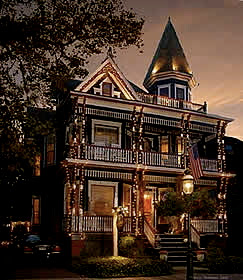 Return with us again to that warm August night in 1963, to the seaside town of Cape May NJ, where Arnold Schnabel, author of these memoirs, sits on the porch of his aunts’ large Victorian guest-house...

Miss Evans came around to the front of the porch, put one foot on the first porch step, but hesitated.

“I wonder if I should just go to that movie?” she said in my direction.

I’d almost forgotten that Mr. and Mrs. DeVore were still sitting there. But they were still there all right, not missing a word anyone said.

“So handsome,” said Mrs. DeVore. “And tall and dark and strong. Darling,” she said to her husband, who was under medium height, balding and blond-haired, and thin except for a pot belly, “should we go see the movie?”

“Is it a war picture?” Mrs. DeVore asked Miss Evans.

“I don’t think so,” said Miss Evans. “But I believe Rock Hudson does play a bomber pilot.”

“I love men in a uniform,” said Mrs. DeVore. Should I describe her? What can I say, she was the sort of woman who produces no visual impression whatever. “Should we go, darling?” she said to her husband, in a voice which was like a million other voices.

“Okay,” said Mr. DeVore, sounding if not quite enthusiastic then reasonably open to adventure.

“Oh, my God, that’s right!” chirped Mrs. DeVore. “Arnold, is Frank Sinatra really going to be at that cook-out?”

The problem here was that listening to them all talking had driven me slightly insane again. I felt like they were all part of some boring movie that I had been transported into, except that I was still a real person and they were just projections on a screen. I suddenly realized that my cigarette had burnt down almost all the way to my fingers, and I dropped it into the ashtray and tapped it out with my fingertip.

She turned back to face him.

“Argyle,” she said, sounding a little frightened. “And aardvark.”

Miss Evans came up the porch steps and over to in front of where I sat.

“Are you okay, Arnold?” she said in a low voice.

I took a deep breath.

She put a hand on my shoulder, and this helped. Her eyes were kind. I came back. Or the world came back to me.

“Yes,” I said. “I’m okay.” I took another breath and, trying to sound normal, I turned to the DeVores and said, or croaked, “Yeah, Frank Sinatra’s supposed to be there.”

Mrs. DeVore smiled in a nervous-looking way at me, her teeth bared and clenched tight. Mr. DeVore beyond her leaned forward and also smiled, in the way one smiles at a possibly rabid dog.

Miss Evans continued to hold her hand on my shoulder.

“I would like to meet Frank Sinatra,” she said. She ran her hand from my shoulder down to the upper part of my arm. “Wouldn’t you?”

I thought about this.

I glanced down at her hand touching my arm, and I saw that she saw me do so. She caressed my arm once more, then took her hand away.

“You really talked to him?” said Mrs. DeVore. “Where is this cook-out? Is it around here?”

The husband tapped the wife on the shoulder, beckoned her to lean toward him as he leaned toward her. He whispered something in her ear, something no doubt to the effect of, “He’s crazy. Better leave him alone.”

They both settled back in their rockers and lifted up their magazines.

Miss Evans leaned down toward me.

“Wasn’t that a Frank Sinatra song?” she asked in a low voice.

I nodded. And I wondered, had I quoted those lines to Mr. And Mrs. DeVore because I was still at least somewhat in the grip of an attack of madness, or had I simply wanted to make them stop butting in?

But then Steve came around the side of the house, arm in arm with Miss Rathbone, who wore a long gauzy ivory-colored dress and carried a small pink purse with sparkles on it. She had made her hair into a sort of billow above her forehead, with silver or silver-colored barrettes above her ears guiding it in waves behind her bare shoulders. She carried what looked like a pink silk scarf draped over her forearms and behind her back.

“Oh be quiet, Steve,” said Miss Rathbone, but she let him guide her around to the front of the porch, her arm in his.

“Thank you. You don’t look bad either.”

“Great,” said Steve, “everybody looks fabulous, now let’s get this show on the road!”

“But Arnold’s waiting for his lady friend,” said Miss Evans.

“Oh, I forgot. Well, we’ll see you there then, Arnold. Come on, darling,” he said to Miss Rathbone.

He tried to pull her arm, but she wouldn’t budge.

“I loved your poems, Arnold,” said Miss Rathbone. “I devoured them. I found them extraordinary.”

“Are they really?” said Miss Evans.

“I’m afraid it’s not quite that easy,” said Miss Rathbone. “Arnold has honed his craft. And he has suffered.”

“I can hone!” said Steve. “And God knows I’ve suffered!” Mr. and Mrs. DeVore were paying attention again, indeed how could they not, and Steve said to them, “Really, I know about suffering!”

Once again they smiled uncertainly and picked up their magazines.

Thank God, or whomever, I saw Elektra coming along Perry Street.

Steve was speaking some nonsense, I don’t know what.

In the light of the street lamp it was as if she was walking on to a stage. She wore a dress I hadn’t seen before, all splotched with silky red and black, and she carried a small shiny black purse on a long thin strap hanging from her bare shoulder.

Mid-street she stopped, and she looked at this group of people sitting on the porch and in front of it.

Then bravely she continued toward us.

(Click here for our next exciting chapter. Kindly turn to the right hand side of this page for up-to-date listings of links to other episodes of Arnold Schnabel’s K-Mart Award-winning Railroad Train to Heaven™, as well as to many of his easy-to-understand poems.)

Steve would be the guy in a play that would get a lot of laughs..and some tears.

who would play Steve?

I believe it was our correspondant Jennifer -- check out her fab blog by the way --
http://sayingyes.typepad.com/saying_yes/

who suggested Steve Zahn. I agree that he would be great.

Thanks for the linkage. :)

Poor Arnold. I feel like we're getting to the point where I want to cover my eyes and not watch his downward spiral. However... insanity could be a very normal response to dealing with those in his house.

Hey, Jen, Mr. and Mrs. DeVore would be enough to send ME over the edge!

Sad, funny, beautiful.
Is that really what Arnold's mother's house looks like? I hadn't imagined anything so...gothic.
I'm pretty sure that O'Day clip came directly from the biopic I saw. Not only did she sing that song, that way, but her percussionist wasn't feeling well that night either.

Dear Kathleen, the accompanying photo is of a typical Cape May guest house -- on Jackson Street, actually, where Elektra lives -- and Arnold's aunts' house is of roughly the same style and from the same era, but possibly a little less ornate.

Glad you liked the Anita clip; couldn't find one of Frank doing that song, but he did a great job of it too.