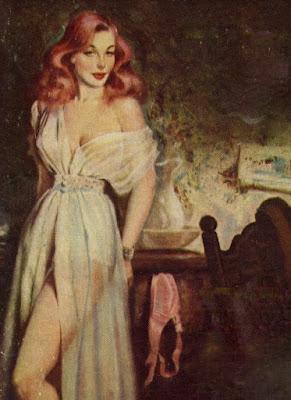 Let’s go back to a rainy August night in 1957 and to the small entrance area outside of Bob’s Bowery Bar, where we find our hero Arnold Schnabel with his friends, viz.: the deific “Josh”, that nautical adventurer Big Ben Blagwell, and Ferdinand the talking fly…

“Once one has discovered and surrendered to the charms of Arnold Schnabel’s sprawling and masterful chef-d'œuvre it becomes increasingly hard to take an interest in the vast majority of what passes for contemporary Qual. Lit.” – Harold Bloom, in The TV Guide Literary Supplement.

“Y’know, Josh,” said Ben, “and, lookit, you just tell me if I’m talking out of turn here, but I would think you would already know this kind of stuff. I mean what with you being the son of the man upstairs and all.”

“I mean, I am not an expert in these matters, but it was my understanding that you in your capacity as one-third of the holy trinity were what they call omniscient.”

“’Scuse me, Josh,” said Ferdinand, he was still hovering in the smoke curling up from Ben’s cigarette, “but I just gotta ask Ben something – to wit, Ben, big buddy, where the fuck did you ever learn a word like omniscient?”

“Hey,” said Ben, “I may look dumb, and, okay, maybe sometimes I act dumb, too, but let me tell you something, pal: I read. I read books. On them long sea voyages, out on the high seas, you know, sometimes you get tired of playing poker and arm-rassling and spinning yarns, and so you crack open a book. So, yeah, I read. I read a lot of books, and when I don’t know a word I look it up in the Webster’s. So that’s how come I know words like omniscient. And that don’t make me a faggot, neither.”

“No one’s calling you a faggot,” said Ferdinand, “which makes one wonder why you would even mention it.”

“I said no such thing, but I wonder why you keep harping on the subject.”

“I ain’t harping on it. I only mentioned the fact that just because a guy reads a book now and then on one of them long sea voyages, and takes the trouble to look up the big words he don’t know in the fucking Webster’s, that don’t necessarily mean he’s light in the deck shoes. That’s all I’m saying. And that’s how come I’ve picked up some of these ten-cent words like omniscient.”

“It’s funny,” said Ferdinand, “but I didn’t know that comic books even had words like ‘omniscient’.

“They don’t, by and large,” said Ben. “But I don’t just read comic books. I read regular books, too, the kind that don’t have pictures. Did you ever read Lonnie the Laughing Cabin Boy, by Harry Pete Steelwater?”

“Uh, no, I think I missed that one,” said Ferdinand.

“What about Molly the Jolly Barmaid by Howard Pelham St. Clair?”

“You kidding me? Good? That Howard Pelham St. Clair writes like a motherfucker – oh, sorry, Josh, I mean, your excellency or whatever.”

“That’s quite all right, Ben,” said Josh, who I suspect was beginning to get as bored as I already was. “You see, in point of fact –”

“Another good one by Howard Pelham St. Clair was Ruby the Pirate Princess of Port Moresby, you ever read that one, Josh?”

“So, yeah, I read,” said Ben. “And not just comic books. And that’s how come I know words like omniscient, and I repeat, that don’t make me a faggot.”

“I don’t know what you mean,” said Ben. “I know a lot of ten-cent words but I never said I knew all of them. What’s this overcompensation shit. I thought that was like when the ships’s purser makes a happy mistake in your wages –”

“It means you’ve probably been hiding the salami with some of your shipmates on those long sea voyages,” said Ferdinand.

“What?” said Ben. “Hey, Josh, help me out here. You’re the son of the big guy, what’s the official ruling on that kind of thing?”

“Pardon me?” said Josh, he had been gazing out at the street and that crashing and clattering thick rain again.

“But that’s what I’ve been trying to say,” said Josh.

“You were trying to say something?”

“Well, I was trying to get in edgewise that I am no longer one-third of the holy trinity. I have now successfully made the transformation into being a mere mortal man.”

“Y’know, I gotta say, Josh,” said Ben, “I mean, maybe it’s just me, but to me heaven always sounded pretty fucking dull. Maybe even, and please do not take offense, maybe just a little faggoty. Wearing them long white robes. Just sitting around listening to angels play harps all day.”

“Well, it’s not exactly like that, really,” said Josh.

“Well, everyone just sort of basks in the divine presence.”

I noticed that Ferdinand had flown down into Ben’s schooner to rest on the surface of the dark beer, and was actively lapping it up, and I couldn’t blame him, I wished I had something to drink too.

“So,” said Ben, after a pause during which he had taken a deep drag of his Sweet Caporal, the kind the writers in the novels I like to read call contemplative, “this is all you do all day up there, just, like, bask?”

“I can see why you wanted a change.”

“Heh heh,” said Josh, again, in a nervous-sounding way, and I had never heard him sounding nervous before.

“Eating,” said Ben. “Eating’s pretty good. And pissing. And, yes, pooping. Also sleeping. Plus, just like what we’re doing now, the fellowship of good buddies. And if that makes me a faggot, so be it.”

“Here we go with the faggot stuff again,” said Ferdinand, taking a break from his swilling.

“Well, whatever,” said Ben. “The point is you gotta take life by the balls.”

“Get it while you can,” said Ben. “And then, when you’re lying dying a horrible lonely death in your rack in some flophouse coughing up your lungs and spluttering out your last breath you can at least say, ‘I lived life. I grabbed life by the fucking balls.’”

“I know so. Do it now. Because maybe the next second your ship gets torpedoed and you die screaming in a great ball of flame.”

“Or maybe you jump overboard but a shark eats you.”

“And when that shark is eating you you don’t want to have any regrets. Like a beer or a Planter’s Punch with a float of ‘151’ that you didn’t drink. Like a Sweet Caporal you didn’t smoke. Like a dame you didn’t make the beast with two backs with.”

“So, okay, on that note then,” said Josh, “maybe I really should just dash over and see if Carlotta will let me come up –”

“Cool,” said Ben. “So it’s all right if I just say Jesus like a whaddyacallit –”

“An exclamation like,” said Ferdinand, who had flown up to sit on the rim of the schooner.

“Yes,” said Josh. “Jesus as an exclamation is perfectly fine with me.”

“So my question is,” said Ben, “I mean, Jesus, what is it with you and this what’s her name – Charlene?”

“Yeah, what’s up with you and this chick?”

“I mean, Jesus Christ, Josh, okay, let me get this straight – you already been up in her pad tonight right?”

“And am I to understand that you did not get any action?”

“Did you get your end wet?”

“He’s asking if you had sexual relations with her, Josh,” said Ferdinand.

“Oh, no,” said Josh. “You see, as I was just saying to Arnold here –" yes, I was still there, “we sort of started to make out, but then she started crying – sobbing –”

“And, well,” said Josh, “when I asked her what the matter was she said she was in love with Arnold.”

“Fucking Arnie,” said Ferdinand. “No flies on him, right, Arnie?”

“Uh,” I said, finally contributing something to the dialogue.

“Okay, Josh,” said Ben. “Can I tell you something? I mean now that you’re officially a human being and all?”

“Here’s the thing, buddy,” said Ben, “there are plenty other dames out there.”

“If I may interpose,” said Ferdinand, “I agree with the big guy. There are plenty dames out there.”

“But I’m in love with Carlotta,” said Josh.

“So you want my advice?” said Ben.

“And then we’re gonna get you laid,” said Ben.

“Me too,” said Ben. “We’ll find you a dame. You still got that wad in your wallet, right?”

“That thick stack of C-notes.”

“Good,” said Ben. “Not that we’ll need even a whole C-note, not in this kind of joint. But maybe a sawbuck, maybe a double sawbuck for some real talent, so we’ll get you some change from the waitress with the next round.”

“You’re saying I should hire a prostitute?”

“What’re you,” said Ben, “prejudiced against a dame making an honest living?”


(Continued here, and onward, until the last marble copybook filled with Arnold’s small but neat Palmer Method Bic Pen handwriting has been transcribed, with every misspelling and grammatical error intact.)

(Please look to the right-hand column of this page to find a  rigorously updated listing of links to all other published chapters of Arnold Schnabel’s Railroad Train to Heaven©. Coming sometime this year, at long last and by overwhelming popular demand: Volume One of Arnold’s autobiography in e-book and maybe even pulp-paper form!)

If the Son of Man or God really has become this naive in his human guise, his rebirth mirrors what I imagine others imagine as "being born again," perfect opposites.