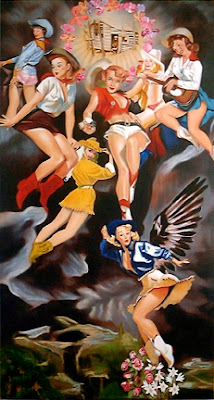 Previously in Larry Winchester's great American novel A Town called Disdain (a Quinn/Martin Production): a young soldier named Harvey has just returned home to the depressed town of Disdain, NM. Going right from the bus to the local watering-hole (Burt’s Hideyway) Harvey is forced to shoot dead a local bully (Bull Thorndyke) in self-defense. But it’s okay, Sheriff Dooley saw the whole thing, and in fact Harvey used the sheriff’s pistol. The big rancher Big Jake Johnstone then hires Harvey to act as guide for the mysterious and glamorous couple Dick and Daphne.

Dick, who has been kicking Harvey’s ass at pinball, has gone to the bar for a couple more beers...

Dick was overjoyed that the barman had actually said that.

Dick looked around. there was a large Indian to his right, maybe forty years old? Fifty? With a long braid yet. Wearing an old University of Hawaii t-shirt. He was staring into an empty shot glass and he had a can of Schaefer next to it and his little area of the Formica bar top was smeared with congealed whiskey and beer and tobacco juice. He smelled kind of like a heap of old sweaty rawhide that had been soaked in beer and whiskey and left out in the sun for a day.

The Indian turned and saw Dick looking at him just as the bartender laid down the two bottles of Rheingold. Dick already had one of the young soldier’s five-dollar bills in his hand.

“You buy me a drink,” said the Indian.

“Uh, sure,” said Dick. He realized he had been rude, albeit unintentionally, in staring that way. “What’re ya havin’, buddy?”

Dick made an effort to keep a lid on his suddenly roiling brains.

Burt the barman looked at Dick.

His own voice sounded faraway saying this.

“Two,” said the Indian, his voice echoing down through the secret plumbing of Dick’s being. “You drink with me.”

Burt went away and the Indian stared at his shot glass. Then Burt came back with a bottle of Schenley’s whiskey and another shot glass. He poured two shots and took the five-dollar bill.

“Well, said Dick, “here’s mud in your eye,” and he raised his glass.

The Indian looked at him with eyes that were impenetrably dark brown with blurry pink whites and then he picked up his glass and drank the whiskey and put the glass down again and went back to staring at the empty shot glass.

Dick drank his whiskey down and Burt came back with three dollars change.

Dick felt better now, feeling the whiskey trickling down through the previously mentioned secret plumbing.
What a great place.
He realized that “Georgy Girl” was playing on the jukebox, and then he felt something warm and soft against his left side and he turned and there was the waitress, Doris.

“Hi there,” she said. She had her tray on the bar top and she was removing empty bottles and glasses from it and putting them on the far side of the bar top.

She was standing quite close to him and she really had quite the body. She was very rounded, with full-sized breasts, curving full hips, a large but muscular-looking backside, a cute belly bulging under her apron. She was very seriously unloading her tray as he looked at her and when she had finished she looked up at him. She was wearing cowgirl boots with heels but Dick was still about eight inches taller than her and after several years with a lanky long thing like Daphne he rather got a kick out of the height advantage. He could see down the top of her cowgirl outfit into her cleavage with its black bra and moist flesh. She had a really strange perfume on. It smelled like cactus and mesquite, and what? Like raspberry Jell-O?

“Hope you’re enjoyin’ the free show,” she said, but she was smiling, and thank God she had good teeth.

She actually blushed. She turned away and then back to him.

“You go on. A beautiful wife like you got.”

“Sure she’s beautiful. But so are you.”

That thing was happening where he was talking but it was like someone else speaking. In some minor Hollywood movie from 1958. Gig Young, or John Agar.

She lowered her eyes and she was still blushing.

Dick continued to look at her, which he wouldn’t normally have done, but of course he was tripping his brains out, so there you were. She shimmered before him, all of ripe womanhood pulsed and vibrated within her in her polyester cowgirl outfit.

Oh, boy. The things you sacrificed for marriage.

“Well, back to work,” she chirped.

She turned and went back into the smoky throng with her tray.

This was Dick’s Indian friend.

“She wants to have sex with you, man.”

“So what?” said the Indian. “You gonna deny the woman a little happiness? What’s wrong with you?”

Well, there wasn’t much you could say to that. Dick got his two bottles of beer and turned to head back to young Harvey and the pinball machine.

The song on the jukebox now was “I had Too Much to Dream Last Night”.

Across the room Daphne was chatting with the soldier, leaning in that way she had against the pinball machine.

Ah well. She had told him more than once that she would cut his balls off if he ever cheated on her.

(Illustrative painting by Greg Rook. Click here for our next thrilling chapter. And for links to previous episodes of A Town Called Disdain, check the right hand column. And remember, you will be tested on this material!)

And now a word from The Seekers:

This is my favorite series on the blog. Larry Winchester has a fine book here. There are just very nice touches like Reingold Beer and if you're going to be dropping LSD, you've got to be listening to the Electric Prunes if it's 1969.

Glad you're digging it, Tedster, and, the Spirit in the Sky willing, there'll be plenty more to come.

Tightest passage yet fer Disdain--draw your own allusions.

But of course that's my own humble opinion. Don't want Father Fahey's boot comin down on me again.

Larry asked me to tender his thanks, Marcus, and he says you have excellent taste in literature. He's rewriting all this stuff before it goes to press, so he asked me to tell all you fans out there that if you have any requests or suggestions, just let 'em rip. Larry's motto has always been, "Give the people what they want."

Goddamn Father Fahey, we're gonna have to get a tribute to him in here somewhere.

"She had a really strange perfume on. It smelled like cactus and mesquite, and what? Like raspberry Jell-O?"

yes, I believe the choice of " Like raspberry Jell-O? "
was in that spot was..inspired.

I've said it before, Larry's a goddam genius. I'm sure that if he had chosen to concentrate on writing fiction instead of making movies and TV shows he would have been recognized as a master on the level of Sidney Sheldon or Danielle Steele.