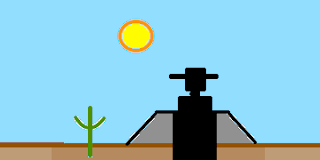 Addison stared at the blank page in his old Olivetti portable (a gift from his grandmother when he went off to his freshman year at Swarthmore), took what he couldn’t help but mentally describing as “a pensive drag of his Herbert Tareyton”, and finally typed:

He stared at the page for another two or three minutes, smoking, and wondering if perhaps he should run down to Ma’s Diner for a restorative cup or two of chicory coffee, perhaps one of Ma’s delicious jelly doughnuts, but then found himself scrolling down a line and rapidly tapping out the subtitle:

A Novel of the Old West

Almost as an afterthought he scrolled down another line and typed the preposition:

And he was just about to type in his name (his real name, not Addison, which was only the name everyone called him, after “Addison DeWitt” in the movie All About Eve, because he was always trying to be witty and urbane, trying, and, yes, invariably failing on both counts), but he hesitated. Should he use his real name? What if he decided to continue with his comprehensive study of trends in criticism of the modern novel? Would a western novel on his curriculum vitae stand in the way of his being taken seriously by the panjandrums of the literary establishment? Perhaps it would be wiser to choose a nom de plume? He had smoked his cigarette down almost to his delicate fingers. He stubbed it out and looked at the opened pack next to his typewriter. Herbert Tareyton. There was a name with a ring to it. A trochee (was it?) followed by a dactyl? What about, say, Herbert Madison? But, no, that seemed like the name of someone who wrote sensitive novels of upper-middle class despair and ennui. What about something with a bit more of a double-trochee punch? Herbert Jackson. No, Herbert wasn’t quite right, let’s face it, Herbert was an effete-sounding name. Wait, flip it around! Jackson Herbert? No, forget about Herbert, damn it! Jackson, Jackson, Jackson, something with force, with strength, a name that would hit the reader like a Joe Louis haymaker to the jaw – wait: Jackson Stackhouse! Now there was a name with hair on its chest. He typed it in and now looked at what he had so far:

A Novel of the Old West

He scrolled down a few more lines and boldly typed:

It occurred to Addison only now that he had never actually read a western novel. He had also never been farther west than Pittsburgh, Pennsylvania. However, he had seen western movies, so let’s stop dilly-dallying around and dive right into it:

The tall stranger looked down on the town of El Paso.

“There it is, yonder,” he said to his horse, Pancho. “Down in that there town lies our destiny, old friend.”

The horse, who was the color of a muddy stream in November, whinnied in response.

“I know, I know,” said the stranger, whose name was Buck Baxter, “you’re not fond of the sounds of gunfire, but I’m sorry, it can’t be helped. I mean to go down into that town and find the gang that killed my kinfolk, and I’m going to kill them killers. With these.”

He pointed in turn to the two sixguns he wore, one on each hip, in holsters of finely tooled Spanish leather.

“And, also, perhaps, with this,” he said, patting the stock of the Winchester carbine in his saddle holster.

“And maybe – just maybe – with a little help from this.”

And he patted the pocket of his leather vest in which he kept his two-shot .50 caliber Derringer.

And he drew his right leg from its stirrup and pointed to the handle of the shin-holstered Bowie knife protruding from the top of his boot.

Buck Baxter lightly dug his spur into the horse’s flank, and off they went, man and horse, down towards the dusty town of El Paso, stomping ground of that pack of thieving murderers called the Bad Men Gang.

He had reached the bottom of the page. Addison lighted up a fresh Herbert Tareyton and looked over what he had written. Not bad! Not bad at all. Should he describe Buck’s ride down into town? No, descriptions were boring. Leave that crap to Hemingway and Faulkner. Nobody wanted to read descriptions. This is why movies were invented, so that people wouldn’t have to read tedious recountings of cowboys riding horses. Just say it and be done with it. Everyone had seen movies showing some cowpoke riding into a dusty town, why bore the reader with a description of it? Having not the faintest idea of what he would type next, Addison rolled the page out, inserted a fresh one, and began to type:

“Say, mister,” called a young voice from out of seemingly nowhere.

Buck pulled up Pancho and looked in the direction of the voice.

It was a young barefoot lad, towheaded, wearing faded overalls and a straw hat, stepping out from behind a large rock. He held  a shotgun that was almost as tall as he.

“I see you’re carrying a lot of hardware, sir.”

“Yes, I suppose you could say that. Besides what you see, I even have a Derringer in my vest.”

“Nice,” said the lad. “I wonder, would you possibly be heading in to El Paso to join the Bad Men Gang?”

“Far from it, my boy! Indeed, I intend to wipe out the Bad Men Gang, for having my kinfolk slain.”

“You don’t say,” said the boy. “In point of fact I was heading into El Paso my own self to shoot down them murderous varmints, for having my own kinfolk slain.”

“I suggest, my lad, that we combine forces. I could use a good shotgun man at my side.”

“As I could use a stout gunfellow well-armed like yourself, sir. And now, may I introduce my sister, Maisie Mae. Come out from behind that cactus, Maisie Mae.”

And out from behind a nearby cactus came a lissome and comely young lass in a faded gingham dress. She carried an enormous pistol in a gunbelt encircling her shapely hip.

“Well, what have we here?” said Buck.

In the time it takes a hummingbird to bat one of its tiny wings the girl drew her great pistol and, holding it in both hands she aimed it at Buck’s face.

“What we have here is the gal who’s gonna blow your head off if you try and double cross me and my kid brother Jedediah.”

“Now hold on, little lady,” said Buck. “You sure you can hit the broad side of a barn with that blunderbuss of yourn?”

“You got a silver dollar?”

“Then dig it out and toss it up in the air.”

Buck dug a silver dollar out of his Levi’s and tossed it up into the air flashing against the bright blue sky, a shot rang out, and Pancho reared wildly, tossing Buck from the saddle and to the dusty dry earth.

Buck sat up, dazed, and the young lad capered up to him and tossed a silver disk into the dust between his legs. It was a silver dollar with a neat hole in it. A .44 caliber hole.

“What do you say now, gunslinger?” she said.

“I say you owe me a silver dollar,” said Buck.

Addison rolled the page out of the typewriter.

Two pages done! Three characters introduced, and even the beginnings of a plot!

He looked at the pile of typescript on the floor next to his little table. His study of trends in criticism of the 20th century novel. He got up, bent down, and gathered up the stack of pages and carried it to his closet, where he stuck it on the overhead shelf under his modest collection of pre-war French pornographic magazines. Then he returned to his typewriter and inserted another blank page. He had found his new calling.

{Please go here to read the “adult comix” version in A Flophouse Is Not a Home, illustrated by the illustrious Rhoda Penmarq…}
Posted by Dan Leo at 9:53:00 AM