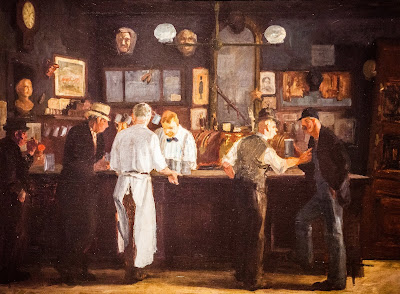 “There are two sure-fired ways to get someone to leave you the hell alone,” said Scaramanga, the leftist poet. As an infant he had once sat on the lap of Rosa Luxembourg, or at least so he claimed.

“Only two?” said Seamas McSeamas, the Irish poet. He had been just another loud-mouthed drunk back in Dublin, but here in New York, and especially in Bob’s Bowery Bar, he was a “colorful Irish poet.”

“All ears we are,” said Frank X Fagan, the nature poet. He hadn’t been farther from Manhattan than Coney Island in eleven years, but he still loved nature, or at any rate that’s what he wrote his poems about.

“Unmuzzle your wisdom,” said Howard Paul Studebaker, the “western” poet, who had once spent part of a summer on a dude ranch in New Mexico, when he was a lad, before his father lost all his money in the crash. “That’s from Shakespeare, by the way.”

“The first way to get somebody to leave you alone,” said Scaramanga, “is to ask them to lend you money.”

The other poets all laughed, more or less mirthlessly. Scaramanga had hit close to home.

“The second way,” said Scaramanga, “is to ask them to read one of your poems.”

At this a silence as of the tomb fell over the assembled poets.

Young Hector Philips Stone, the doomed romantic poet, came over to the table.

“I’m broke,” he said. “Will any of you guys lend me two bits so I can have a bock and a hard-boiled egg?”

The other poets all looked at each other. Poor Hector looked like he hadn’t eaten in a week. Scaramanga had just cashed his welfare check, so he dragged out his old Boy Scout wallet and took out a fiver.

“Take this, Hector, and go to the bar and order us another pitcher of bock, and an empty glass and a hard-boiled egg for yourself. You can leave Bob a fifty cent tip, but I want the rest of the change back, comrade.”

Hector took the five and went over to the bar.

“I just hope he doesn’t ask us to read any of his poems,” said Scaramanga.