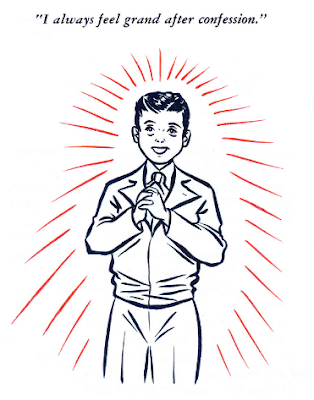 “And how long has it been since your last confession, my son?”

The priest sounded Irish, which seemed like a good thing to Pete Willingham. The Irish priests in movies always seemed real kindly-like, like Barry Fitzgerald in Going My Way. He was glad he hadn’t got an Italian or a Polack priest, or God forbid a Kraut priest –

“I asked you how long it’s been since your last confession.”

“Well, that’s a little embarrassing, father. Can we like skip over that part?”

“You can tell me, my son. Thirty-three years a priest, believe me, I’ve heard pretty much everything.”

“Okay, you asked for it, father. I ain’t never been to confession before.”

“Maybe you never heard that before.”

“Well, I hear it every year when children make their first confession, but I will admit I’ve rarely heard it from grown-up people, except of course in the case of converts. So am I to take it that you are indeed a recent convert to the Church.”

“And have you received instruction?”

“I got that little picture book, the St. Joseph’s Baltimore Catechism?”

“I see. But have you gone to a priest to receive instruction in the laws of the Church.”

“No. That I ain’t done. But I studied the catechism. Most of it. Ask me a question. Ask me who made me.”

“I don’t think this is quite the place or time for catechism study, my son.”

“Yes, you were. May I ask you why you have decided to convert to Catholicism?”

“Because of this, father. What we’re doing here.”

“That’s right, father. I need somebody to talk to. Can I tell you why?”

“Well, I’m sure there are other people out there in the pews waiting to make their own confessions –”

“I just got out of the looney bin, six months at Bellevue. Three months at Riker’s before that. And before you ask, the charges were drunk and disorderly, public mischief, and incitement to riot. I told you I had plenty to confess.”

“So they let me out finally, and I went back to my regular stop, Bob’s Bowery Bar? That was where my last drunk and disorderly happened. You know the joint?”

“Good joint. So as soon as I got out of Bellevue, I went back to Bob’s, and I did what they told us to do in group.”

“Group therapy, father. They told us when we got out we should apologize to everybody we ever hurt. It’s part of what they call ‘the Program’.”

"So I apologized to Bob the owner and all the other regulars, and I asked Bob if he would let me come in again. And he heard me out, and finally he said yeah, but I gotta keep a lid on it. No giving my opinions all the time, no butting into people’s conversations and arguing and shouting. In other words, keep my trap shut.”

“And it’s hard, father. It’s real hard keeping my trap shut. Back in the hospital I got to see this lady psychiatrist, Dr. Weinberg? And her I could talk to. I been seeing her off and on for years now, each time I get pinched for public nuisance or reckless endangerment or something, the judge keeps sending me back to Dr. Blanche. That’s her first name. Blanche. Weinberg. Jewish lady, but real nice. But here’s the thing, father, now I’m out on the street again, and if I wanted to talk to Dr. Blanche I’d have to pay her, unless of course I screw up again and the judge sends me back to her. But I ain’t got the money to pay her, father. I wish I did, but I don’t. So now I got no one to talk to. So I decided to become a Catholic so I could go to confession and have someone to talk to. So here I am. You want to hear my sins?”

The priest said nothing, and Pete waited. Pete was patient. You learned how to be patient in jail, and in the psycho ward, and on the streets.

After a minute the priest spoke.

“I’m going to ask you to come see me at the rectory, and to begin instruction in our faith.”

“I’m between jobs right now, father, so my calendar is completely clear.”

“Come to the rectory today then, let’s say four in the afternoon. Ring the bell, and tell the girl you have an appointment with Father Molloy.”


Pete Willingham’s Conversion, and Further Tales of the Bowery, by Horace P. Sternwall; a Pyramid Books “paperback original”, 1954; out of print.
Posted by Dan Leo at 12:45:00 PM