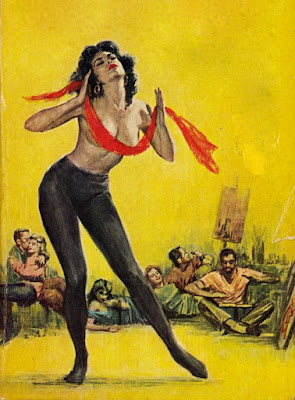 Let us rejoin our intrepid hero Arnold Schnabel and his companions Bowery Bert and Emily, here outside the entrance of Bob’s Bowery Bar, on this rainy hot night in August of 1957…

(Please click here to read our previous thrilling episode; the idly or morbidly curious may go here to return to the very first chapter of this 63-volume Gold View Award™-winning autobiography.)

“How wonderful is it that this eminently humble man, Arnold Schnabel, who never even finished high school (although he did indeed acquire his high school equivalency diploma in his early twenties during his army service), should have given us what is undoubtedly the crowning masterwork of American literature?” – Harold Bloom, host of Philip Morris Commanders Present “Tales of Arnold Schnabel”, Wednesdays at 9pm (EST), exclusively on the Dumont Television Network.

Bert and I got Emily and ourselves to the open doorway again, awkwardly, needless to say (but there, I’ve said it, needless or not, and I hereby grant permission to any imaginary future editors of these memoirs to excise the adverb “awkwardly” directly above, along with any other verbiage they deem redundant or painfully obvious or without interest even to the most obsessed scholars of lunacy, up to and including every word I have written, am writing, or will write), what with Bert being so short, me being so much taller than he, and still possessed of a persistent erection, and Emily halfway between us in height, as well as completely unconscious.

The doorway was not wide enough for us to go through three abreast, and so Bert took the initiative and went through first, keeping Emily’s arm over his narrow old shoulders, and I went through last, keeping my right arm around Emily’s waist as she dragged her feet on the floor, and this time I didn’t worry about closing the door behind me, if anyone challenged me on the matter of being brought up in a barn I would improvise a response then, if I could, but I really couldn’t worry about closing the door during this maneuver, as fraught with the possibility of disaster as it already was. I should perhaps remind the reader that I still had Emily’s heavy hard black purse hanging by its strap over my left shoulder, and I found myself wondering what else she kept in there besides an economy size jar of Pond’s cold cream, because it felt suspiciously like there were a half-dozen hand grenades clanking around in it as well.

“Okay,” said Bert, once we were inside and on the verge of that mob of drunken people dancing, thrashing about, and falling flailing to the filthy strawdust-strewn floor to the music not of the jukebox now but rather of what sounded like musicians in the living flesh somewhere off to the right, although I couldn’t see them through the mob, “what do you say we just jettison Sleeping Beauty here, and then we’ll go meet your good buddy, what do you call him, ‘Jack’?”

“’Josh’, yes, the son of the big fellow himself!” Bert still had that shriveled little cigar in his mouth, he was one of those guys who could expertly talk with a cigar in his teeth or, as in his case, dentures. “Okay,” he said, “let’s just lay her down in the corner in back of this booth here –”

He started to pull Emily in the direction he had indicated, the back of a booth just to our right, but I held tight to Emily’s waist and stood my ground.

“Look, Bert,” I said, or yelled, we were both yelling now that we were back in the bar, “we’re not just laying her down on the floor.”

“Well, I was thinking in terms of sort of sitting her up kind of –”

“We can’t just leave her sitting on the floor either.”

“We find my publisher, Julian, and we hand her off to him.”

“In other words let her be his problem, not yours.”

“Employer and employee, out on a little spree, huh?”

“Yes, I suppose you could say that –”

“I sense something unsaid in your tone.”

“I leave many things unsaid in my tone.”

“This what’s his name, Justin?”

“Bert, I wish you wouldn’t use that sort of language. She’s right here between us you know.”

“This ‘Julian’ is having carnal relations with Edina.”

“I think he might have had relations with her, yes,” I said.

“So, wow, this little number gets around, don’t she? Boning both you and your publisher!”

“Bert, I really wish you wouldn’t be so crude.”

“What did I say that was crude? Arnold, I got news for you, pal: you and everybody else in this room, well, except for me and for your buddy – I’m sorry, what do you call him?”

“Everybody in here except for me and ‘Josh’ wouldn’t even be here if their parents hadn’t boned.”

“I just wish you would stop saying that.”

“But it wasn’t me who – you know – had relations with her. I told you, it was this fictional character, Porter Walker.”

“So you are adducing the fictional-character defense.”

“All I can say is that I, Arnold Schnabel, would not have had relations with her.”

“You say that with a boner still likely to burst out of your jeans like a jack-in-the-box.”

What he said was true. I was still possessed of an almost full erection, probably kept alive by the fact of Emily’s warm body pressed close to mine.

“Look, Bert,” I said, “there are some things over which I have no control. Many things in fact. And, unfortunately, what you are referring to –”

“My whatever,” I said, “unfortunately that is one of them.  But, look, can we please just find Julian?”

“And pass the problem of Edina here on to him.”

“Great – 'Emily' it is then. So where is this Jonathan fellow?”

“Bert, are you deliberately trying to drive me crazy?”

“Then one last time: Julian’s name is Julian, and Emily’s name is Emily.”

“Someday you’ll be old and you’ll have trouble remembering names.”

“It won’t seem so funny to you then.”

“Then maybe you shouldn’t get so goddam condescending when I have just a little bit of trouble remembering human names now and then.”

“Because let me tell you something, boyo, as old as you might get you will never get as old as me. You dig? Not even close. Not even close by a couple of thousand years.”

“So get over yourself.”

“You’re the one who’s been holding us up, not me. Where is this what’s-his-name, anyhow?”

“He must be in here somewhere. Let’s drag Emily through this mob to the bar and look for him there.”

“I don’t think he’s going to be happy about us foisting a passed-out doxie on him.”

“Hey, he brought her here, right?”

I said nothing to this, but I suppose my face again betrayed me, or revealed me.

“I feel as if I'm not behaving very well.”

“So, what, now you’re saying you don’t want to foist her off on this Jules guy?”

“Arnold, lookit, what do you want to do, drag this little dolly around with you all night, and then when she wakes up have her pulling on your johnson again like she wants to yank it out by the roots?”

“So, great, so get over your scruples and let’s find this Gerald guy.”

“Good,” said Bert. “Now, what I suggest we do is we both get a good grip on Little Miss Whore of Babylon here and plunge without ceremony straight into this throbbing mass of dancing drunken fools, but walking sideways, with me leading the way, wielding my umbrella like a cudgel if necessary, and we don’t stop till we reach the bar.”

“Don’t be afraid to use your elbow if need be.”

“On the count of three. You ready?”

“Ready as I’ll ever be,” I said. Not that I was really ready, or even halfway ready, no, I was merely as ready as I ever would or ever could be. My erection had subsided just a little bit in the last couple of minutes, so at least I had that going for me.

(Kindly look to the right-hand column of this page to find a purportedly accurate and current listing of links to all other published chapters of Arnold Schnabel’s Railroad Train to Heaven©. Yes, a recent inventory of our warehouse reveals that we still have an extremely limited assortment of Railroad Train to Heaven Action Figures™ {Arnold, Bowery Bert, Emily Julian, Big Ben Blagwell, and even Ferdinand the fly!} left over from our big holiday sales event, so call now and get a 75% discount on all items – free delivery on all orders of $25 or more!)

Although it probably wouldn't seem like a miracle to Julian...