“A Town Called Disdain”, Episode Fifty-Nine: in which Lefty gets his Mojo working 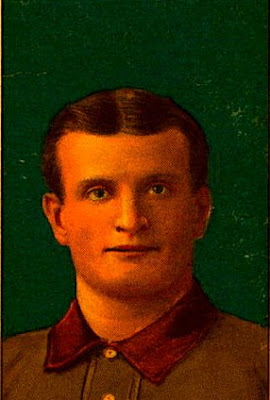 Larry Winchester -- in this very special return-of-baseball-season episode of his Captain Spaulding Award-winning epic -- returns to a character we haven’t seen since way back in Episode Three.

Larry may take his time in tying up his plot threads, but he gets to them all in his own good time...

While all this was going on Lefty Schiessen was pitching the game of his life against the Tucumcari Twins.

The score was tied, nothing-nothing, and he was heading out now to pitch his seventeenth inning of what was so far a perfect game.

Lefty had struck out thirty-five batters so far; he was “in the zone” as he’d never been in the zone before.

(And of course he was tripping his brains out. He’d even dropped a second tab between the ninth and tenth innings.)

He was so much in the zone that he almost wished the Browns wouldn’t score a run just yet. So far that hadn’t been a problem. In sixteen innings and against four different Twins pitchers the Browns had only managed to sprinkle four singles (two of them hit by Lefty) and six walks; they had struck out twenty-nine times and they had never had more than one man on base in an inning.

But the beauty of it all was the Twins were a pretty good club, having already clinched the Triple-A Desert League pennant as well as leading it in team batting average, hits, home runs and runs scored. It was true that a couple of their better players had been called up to Minnesota for the close of the season, but they were still a damn good team, and Lefty was just slicing through them, “Like a hot steak knife through a mound of warm cowshit,” said the Skipper (the Skipper being the pathetic old drunk who managed the Browns).

Lefty’s fastball was just shooting like a lightning bolt out of his hand; these guys were missing his maniac slider by half a foot; and they were spinning around and falling on one knee in the dirt with the ump hollering strike before Lefty’s change-up even loped across the plate.

Lefty was in the zone and that’s all there was to it.

Standing there on the mound under these strange bright lights at the top of the seventeenth as the first weary batter made his way to the box Lefty took off his glove and put it under his armpit and he rubbed the warm ball in his hands and he knew that all the universe was inside this ball. He could feel it, pulsing. He could feel himself inside the ball. He looked up at the black sky beyond the halo of field-lights and he knew that he was looking up at the inside of the core of the ball, that he was just an atom on a bigger atom that was only a tiny atom in a larger atom that was only a tiny atom in the core of the ball, and that his own enormous Godlike hands were somewhere out there rubbing the ball, and that there was an even larger ball somewhere outside and beyond that ball.

(Click here for our next bewildering chapter. And kindly turn to the right hand side of this page for up-to-date listings to links of all extant episodes of Larry Winchester’s A Town Called Disdain™.)

I need to lie down now.

let's give three cheers to Doc Ellis, formerly of the Pittsburg Pirates.

Eager as I am to learn what's going on outside the quonset hut where Marlene and Grupler have gunned down the Baxters and the CIA motorcyclists (or are they merely FBI guys?), not to mention what going on inside it, where a friendly, handsome group should by now be soaring on peyote, it is enlightening to realize that theirs is far from the only life being lived.
That for all the intensity of their experience, cold-blooded, multiple murders outside the hut, and the heightened awareness being shared inside it--Lefty's throwing the 17th inning of a perfect ball game. Life's so much bigger than we usually notice.

Tedster, you know your baseball lore!

Wikipedia has a nice little piece on the wacky Ellis, who pitched a no-hitter on LSD:

Kathleen: dig it. But Larry also assures me that Lefty's adventures will somehow tie in with those of our other heroes, in another two or three hundred pages...