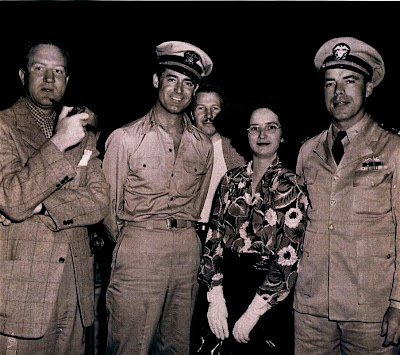 Our exclusive serialization of the never-before-published uncut version of this sprawling masterwork continues as our author Larry Winchester delves deeper still into the murky psyche of one Captain Alexis J. Pym, USN...

Not that Ridpath was a bad guy.

For instance he’d always bring back souvenirs and presents for everybody when he returned from one of his outlandish assignments. Little trinkets and things for the girls in the warren. Stranger items for the men.

Pym still harbored in his lower right desk drawer a shrunken head that Dick had brought back from the Amazon, a poison dart blowpipe from Borneo, and a vial of rhinoceros-horn aphrodisiac from Bechuanaland (sampled only once -- he had worn his penis raw in a masturbatory frenzy in his little office, slavering and drooling over a deck of pornographic playing cards Dick had brought over from Burma).

Pym liked the guy. Everyone did. Especially women. And the Admiral of course. Everyone liked Dick.

“Bonjour tout le monde,” he would say upon making one of his infrequent returns to the warren. Bonjour tout le monde. Only Ridpath could pull off that sort of thing. Certainly Pym could not, he knew, having tried it one wet miserable cold November morning, after having practiced all weekend in the den of his faceless splitlevel in suburban Virginia, with Pat Boone turned up loud on his hi-fi so that his nameless robot of a wife and his two strange zombielike children should not hear him. He had come to the warren and tried to toss it off casually and urbanely, pipe in hand -- "Bonjour tout le monde!" -- and everyone in earshot had looked up, briefly, from their desks, and a few others who were walking somewhere had halted and turned, momentarily, and one or two people had peeked out of their office doorways, just for a second. With contempt. Followed quickly by lack of interest. Pym had flushed deeply, feeling the sweat breaking out under his underwear, and he had tried to chuckle urbanely, producing only a high-pitched croak which he tried to turn into a cough which came out as a strangled wheeze.

And then he had scurried off to his own little office which he always referred to (but only in his thoughts) as “my cell”. And he stood there, hyperventilating, holding the first knuckle of his right index finger between his sharp little teeth.

Oh, those days when Ridpath was due to return.

You could feel a special body-electric current in that normally flat deathly fluorescent air of the warren.

Say Ridpath was due back on a Tuesday; all the girls on that Tuesday would have fresh new hairdos, their make-up shimmering and bright, their outfits clean and slinky or crisp as the wrapping paper on ripe fresh fruit; nylons hissed and whispered like locusts in heat and the subterranean atmosphere was alive with a dozen warring hothouse scents.

Needless to say only the most rudimentary work would barely be attempted.

Pym himself would have gotten a haircut the day before, and even perhaps a manicure as well. He would have had his uniform cleaned, starched, and pressed, and he would have personally polished his shoes so brightly he could see his own ghostly doubled visage looking up at him from them as he languished in his cell not working, suffused in his own private cloud of Aqua Velva.

And the thing of it was, Ridpath never returned on the day he was supposed to. Never. Forget about showing up on time, he just didn’t show up at all. Oh, sure, he would phone, probably at about four in the afternoon, asking to be connected to the Admiral, and of course the Admiral would take the call, and Pym would creep slowly past the Admiral’s office and hear the Admiral chuckling, saying, “Oh, Dick, you kill me! You slay me!”

And so maybe, maybe on the Wednesday or more likely on the Thursday, Dick would show up, finally. Two or three days when virtually no work was being done, and all because of this, this -- anticipation.

But oh the feeling in the warren when all of a sudden there fell a complete and echoing silence and then you heard it, that pleasant euphonious baritone: “Bonjour tout le monde!”

And then all bloody hell broke loose. The chirping and the squealing of the women rising up like the mating chorus of a flock of ecstatic parakeets. And under it all that chuckling friendly baritone.

Pym would go to his door and press his ear against the cool plywood, listening as Dick’s joyful, noisy advent surged closer. The women laughing and screeching, the men joking and hey-buddying, and borne along within this happy babble, Dick’s quiet but carrying friendly voice.

Standing inside his door, his heart thumping, that sweaty feeling under his Fruit-of-the-Looms, that sweaty feeling now all over his body except under his armpits which he had absolutely caked with Ban Roll-On. And as the noise drew closer he drew his reddened knuckle out from between his teeth, scuttled back to his desk for his pipe, with trembling hands packed it, with six or seven matches finally lit it, puffing desperately, the noise almost at his door now, and he went to the door, but no, he needed his prop, his other prop, and he went back to his desk and grabbed a folder, yes, some papers he had to take somewhere, yes, an errand, he, he at least was working, not just sitting around all day waiting for Dick, and he put the folder under his arm and went to the door and took several deep breaths, the noise outside came louder, the parade was almost upon him, he opened the door, and there he was, Dick, tall and so very there, sun-burnished and radiant (or, true, sometimes perhaps so very pale, the sad paleness of Michelangelo’s David) but there, smiling, chatting, laden with presents and with that scuffed and battered old attaché case of his, surrounded by almost the entire staff of Q Section.

And then everyone stopped and looked at him, Pym, standing there, sweating.

Was there really such a great pause or did he only imagine it? That momentary silence. Did Dick’s sky-blue eyes really glaze over for just a fraction of a second? Did his famous smile really falter just briefly?

But then there it was, that strong hand thrust out from under the parcels and Dick smiling broadly and warmly and saying, as he always said to Pym, “Hey, fella, how’s it hangin’?”

How indeed. How else but limply and in defeat?

And Pym bravely extended his own hand, but it was the hand that held the pipe, Dick chuckled fondly, Pym blushed and transferred the pipe to his other hand, and in so doing he dropped his folder of fake work to the floor, and blushing deeper still he bent over to pick it up, catching a slow-motion glimpse of his miserable ghastly face in his hyper-polished shoes, and retrieving his fake folder he dropped his pipe, the burning tobacco spilling across the tiles as the pipe spun and slid between some woman’s pumps.

Pym would stay in the warren late on these days. “Working.” “Catching up on some work.” “Trying to straighten out some of this back paperwork.” Dick would have gone for cocktails and dinner with the Admiral. Pym would not have been invited. But that was okay, he had “work” to do.

Someone around here had to get some work done.

He would sit in his office, his cell, until everyone had gone. He would have phoned his nameless wife. She didn’t care. She was probably grateful. She could watch My Little Margie in robotic peace and drink her martinis undisturbed by his baleful presence in their pastel-hued splitlevel with its Swedish furniture and its faintly disturbing paintings of Paris street scenes which she had bought on a subscription plan advertised in the back pages of the Ladies’ Home Journal.

(Kindly go here for our next thrilling chapter. And turn to the right hand side of this page for a complete listing of links to all other extant episodes of Larry Winchester’s A Town Called Disdain™, soon to be a major mini-series event from the Hallmark Hall of Fame starring Justin Timberlake; a Sheldon Leonard Production.)

And now just a brief word from Miss Joan Jett:

Another great piece. I'm starting to feel sorry for Pym for being so like him.

I wanna be Joan Jett's dog.

Manic, Duvel is one beer that's just too good, if you know what I mean (in other words I have to force myself firmly to say "No" after the third one.)

Nephew: I feel you.

I take it back about Pym. How wrong I was to peg him as a drone. He suffers like the best sinners and saints.

Oh, by the way, sport fans, be sure to check out Kathleen's and Manictastic's own sites for some great contemporary fiction.