"Nobody Cares What You Think" 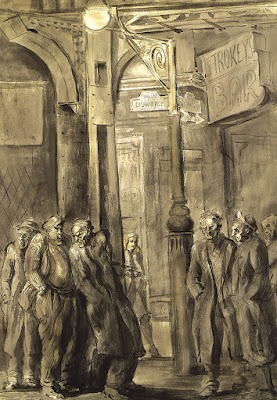 After Pete Willingham had served his latest three months at Riker’s, this time followed by a good six months in the psycho ward at Bellevue, the first thing he did when he got out on probation was to head over to Bob’s Bowery Bar.

It was about ten in the morning on a fresh April day, and the joint was not quite three-quarters full. Pete didn’t dilly-dally around but went right up to the bar, where Bob stood staring at him.

“Okay, Bob, before you throw me out I just want to say that as part of my program I am supposed to apologize to anybody I hurt in my life. So I want to apologize, for all them times I got out of hand, all them times you had to throw me out. And I deserved it. Even that last time when you threw me out and told me never to darken your door again. So I apologize.”

Bob didn’t say anything, but he took out one of those Parodis he smoked, and lighted it up. He tossed the match in an ashtray. Everybody in the bar was quiet.

None of the guys and none of the women who were there said anything. They were probably taking their cues from Bob.

“So,” said Pete, “that being said, I want to ask you, Bob, to give me one last chance. Because I love this place. Ever since I come to the city from Wheeler’s Corners this place been like a second home to me. No, strike that, like a first home, ‘cause I ain’t got no other home.”

Actually he had a family and their home back in Wheeler’s Corners, a family that would probably take him back, albeit not with open arms or great enthusiasm, but Pete didn’t go into all that.

Bob took a draw on his Parodi, then spoke.

“I’ll give you one more chance, Pete. But listen to me now because I’m going to give it to you straight. Nobody cares what you think, Pete. About anything.”

“Nobody wants to hear your opinions. About anything.”

“And nobody wants you butting into their conversations so you can tell them what you think. Nobody cares, Pete. If you can accept this, you can stop in here sometimes, on a provisional basis.”

“But the moment I hear you raising your voice to anyone to tell them what you ‘think’, the flag comes down, and you are out of here.”

“Also none of that high-pitched wheedling stage-whisper voice.”

“I think I know what you mean. So I can talk, but just in normal tones.”

“And no gratuitous opinions. Nobody wants to hear your crap. If they do, they will ask you, but if I were you I wouldn’t hold my breath.”

“All right, sit down, and the first one’s on me. The usual bock?”

“The usual, Bob, thanks,” said Pete, and he settled up on a bar stool.

The people in the bar resumed their conversations. Bob gave Pete a mug of the house bock. The crisis was passed.

“Pound for pound,” said the Brain, to Pete’s right, speaking to that guy who wrote the cowboy poems, Howard Paul Studebaker, “the best baseball player ever was Ty Cobb, the Georgia Peach.”

Ty Cobb? thought Pete. That was outrageous. No way was Cobb a greater player than Babe Ruth, the Sultan of Swat, and he was just about to butt in and say so, when he saw Bob staring at him, almost like he had bribed the Brain to make such an outrageously false statement.

Pete made a fist of his left hand, and stuck his first knuckle between his teeth. He stared down into his untouched bock.

This was going to be very hard, maybe the hardest thing he had ever tried to do in his life.

“Here’s what I consider the twenty-five best films ever made. The General. The Kid. Citizen Kane. Rules of the Game –”

And on he went with his boring list of so-called classics. Where were the Hoplaong Cassidy movies? What about Gene Autry and Roy Rogers? How about Ted Healy, or even better, Wheeler & Woolsey? What about every single Joe E. Brown movie?

Pete started to say something, but then he saw Bob, staring holes into Pete’s poor soul.

Pete took his knuckles away from his teeth, lifted his mug of bock and drained it all in one go.

And people wondered why he drank.


– Nobody Cares What You Think, and Other Tales of the Bowery, by Horace P. Sternwall, a Proletarian Books  “paperback original”, 1954; out of print.
Posted by Dan Leo at 11:03:00 AM