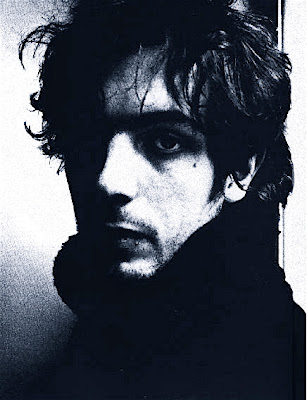 It’s been a bleak September day in 1969. Our heroes Harvey, Dick and Daphne went off on a horseback ride whose highlight was the violent death of a local family of two-bit redneck perckerwoods. They are being followed by the sinister Europeans Hans and Marlene, who in turn are being shadowed by the government agents (and fellow guests at the Johnstone Ranch) Mr. Philips and Mr. Adams. Hope, the teenage daughter of the blustering rancher Big Jake Johnstone, has had some sort of breakdown, and the local physician, the drug-addicted Doc Goldwasser, had been called out to treat her. In a foul cave in the hills the motorcycle gangster Moloch smokes opium, plotting foul play.

Meanwhile Enid, the local café proprietor and sculptress, mulls it all over...

Enid lay propped up in her big brass bed, resting, smoking a joint and sipping from a mug of milky honeyed tea.

The phone rang and she picked it up. It was Squitters and he sounded fairly sober.

Enid had finally realized -- in large part thanks to Derek Squitters, the raffish young Englishman now staying out at the Johnstone Ranch -- that like the vast majority of American artsy or intellectual women she had long been a pathetic pushover for all sorts of dodgy men whose sole recommendation was a foreign accent.

She had met Squitters during her last trip to Europe, in November of ‘68. She’d gotten really high with some friends one night in London, they all went to catch the Pretty Things at the Marquee, and someone introduced her to Derek Squitters, wearing a purple velvet cape and a red silk blouse, leather pants and jackboots, and dispensing cocaine from a gold death’s-head locket hanging from his scrawny neck on a silky gold chain.

The next thing she knew she was in an affair if you could call it that with Squitters, who was the leader of this group called the Measles, which had started out as a rough and ready rhythm-and-blues band but had now gone psychedelic along with everyone else (their most recent album being an opera entitled Seven Gates into the Tortured Mind of Mr. Piddlewiddie, yielding the hits “Foghorns and Fiddlesticks” and “Your Face is a Universe”). It had all been slightly flattering at first because he was only twenty-three and kind of cute in a skinny English crooked-teeth sort of way, and he had tons of money and his pick of any number of needle-thin models and actresses, but he said he liked her because she was “a fuckin’ woman”. Of course like every other Englishman of her experience he was lousy in bed and he usually had bad breath and B.O., but there were perks: the limousines, the champagne, the celebrities and nightclubs and drugs. It was okay for a lark.

One night she played him a tape she had made of some Mescalero chants, and he had been “fuckin’ freaked’ by it -- he was tripping at the time (he was usually tripping) -- and he said he wanted to come to New Mexico and record and “get high with the fuckin’ Indians, man; they know where it’s at”. She had dismissed this remark as readily as she dismissed 90% of what he said.

When she went home a couple of weeks after meeting him she was glad to get away from him. He wasn’t a bad kid, he was just young and stupid and not really very interesting, and she realized she had once again succumbed to the Foreign Accent Syndrome, combined with a healthy dose of the Celebrity/Rich Dude Syndrome. She thought about all this on the flight back. She was getting too old to waste her time on boring men. She resolved that the next man she had a real affair with would not be a bore. She thought about it some more and finally resolved also that he could not be a jerk, either.

She was not all that sure she would ever find a man who was neither a bore nor a jerk.

Maybe she was setting her sights too high.

Anyway, it had been almost a year since the Squitters affair, ten non-boring and artistically-fulfilling celibate months when, wouldn’t you know it, who phones from New York a few days ago and says he’s on his way but Derek. Says he’s missed her and really wants to see her and he wants to “’ang wif the Indians”.

She made it clear that he couldn’t stay with her and that he definitely couldn’t have sex with her, but since he seemed bound and determined to come she arranged for him to stay at the Johnstone dude ranch. She really didn’t want him all over her with his gamy leather pants and his creepy silk shirts and his oily spotty skin and the Chanel #5 he splashed under his bleedin’ armpits.

He had shown up the night before last (helicoptered in from Albuquerque), and she had been civil; they had a nice late dinner in her apartment above the coffee shop and she let him know again in no uncertain terms that their affair was over. He accepted her declaration with a little bit more aplomb than her vanity liked; the little bastard knew there were plenty more where she came from. He then proceeded to get absolutely shit-faced drunk.

She drove him out to the Johnstone place. He had never learned how to drive, claiming wisely that if he did he would only wreak havoc on himself and others.

When they got to the ranch he made one more sloppy attempt to “’ave a bit of a shag for old time’s sake”, and she shoved him out of the truck. He curled up in the dirt and went to sleep. She got out, went to the back of the truck and got out his stuff: an alligator suitcase, a trunk of recording equipment, his guitar. She laid it all next to his snoring body and went up to the house and rang the bell. Chang the houseboy came to the door, and Enid left the rest to him.


Enid had set it up for Squitters to take part in an Apache peyote ceremony out at the reservation later tonight, and she agreed to drive him out there, which was why she was lying in bed and resting now. He was calling now to invite her to come out early for a barbecue at Big Jake’s; they could eat supper and then afterwards head out to the reservation.

“Fuck ‘im,” said Derek. “Ya gotta come out any’ow, why not get a free meal and some booze. Besides, there’s all sorts of weird people ‘ere. You’ll dig it.”

Enid had to admit she was intrigued. Everyone at the coffee shop had been talking about this odd assortment of people staying out at Jake’s. What the hell. She told Derek she would be there.

(Click here for our next shagarific chapter. And check out the right hand side of this page for a listing of links to other episodes of Larry Winchester’s A Town Called Disdain™, as well as to appreciations of many of his classic films.)

"they all went to catch the Pretty Things at the Marquee, and someone introduced her to Derek Squitters, wearing a purple velvet cape and a red silk blouse, leather pants and jackboots"

didn't The Measles do "I Dig You Mind"?

oops--I meant "I Dig Your Mind"

Anon, You were right the first time you just forgot the comma.

Dan there are a couple "ahd"s in the script.

Thanks for the typo-spotting, Red; I think I fixed them all; that's what happens when you try to transcribe Larry's typescript while under the influence of peyote.

Anon, that's right, the Measles did a cover of "I Dig Your Mind" on the flip side of their non-album single "Lady Thalamus" (Immediate, Dec. 1968), which peaked at #47 on the British charts, but reached #1 in Japan. Re-released on the Lawn label in the US in February of 1968, it inexplicably failed to chart.

Back then I suppose a purple velvet cape and red silk blouse didn't signify what I think it does now. Or maybe it did: Enid is as mysterious as the rest of 'em.

Dear Kathleen, purple capes and red silk blouses were practically "de rigueur" in 1968 London, and no reflection on a bloke's masculinity.

Although they may have been a reflection on his good taste.

In the new spirit of transparency and simplicity soon to be touted by the reform minded officials of the white House staff of economic advisers:

I think Dan is mistaken it is really: "I dig, You Mind?"

Red: well, I dug out that old Measles 45, and, sure, enough, the B-side was not a cover of "I Dig Your Mind" but indeed "I Dig, You Mind?" but with the question mark, and it's a Derek Squitters original. It's pretty good, too, with a nice electric sitar solo.

Your honesty is admirable Dan, but of course you know this eliminates you from any consideration for a civil service post in the coming economic implosion.

Red, to paraphrase Groucho Marx, I wouldn't want to work in any civil service that would hire me.

"the raffish young Englishman how staying out at the Johnstone Ranch"

"the raffish young Englishman HOW staying out at the Johnstone Ranch"

Anon, once again I thank you for your eagle typo-spotting! Expect a signed copy in the mail when the publisher finally brings out the deluxe unexpurgated edition of Larry's masterwork!

I'm going to start reading for typos now. For the signed copy.

Kathleen, we've already got one reserved for you.