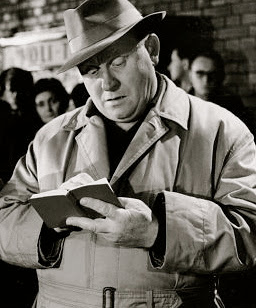 Previously in our serialization of Larry Winchester’s sprawling (“Oh, but how one wishes it were twice as long!” -- Ronald Firbank) epic, now presented uncut for the first time:

Dick Ridpath (“One fairly expects his passport to list his occupation as ‘mysterious stranger’” -- John Updike) and his lovely and unflappable young wife Daphne partook of an uneasy lunch at the table of dude-rancher Big Jake Johnstone. Who should Dick have seen there but the apparently notorious Hans Grupler and his accomplice Marlene, under the guise of tourists named Feldschmitt from West Germany.

Dick went down the hall to take a pee before they went out for the day but the door was locked.

Dick stood and waited. He lit up a cigarette. A Marlboro. There had been a mahogany box of them on a little table by the staircase and he had grabbed a handful. He breathed it in. He missed his unfiltered Craven “A”s, which he had gotten used to in Saigon and Singapore. He’d have to pick up some Chesterfields in town.

A deep orgasmic groaning came from the bathroom, then finally a heavy liquid plopping accompanied by burgherish sighs of pleasure.

Dick had only seen Grupler in person once before. Marlene he knew only by photographs. However it had once been Dick’s job to know quite a bit about people like Grupler and Marlene.

They were terrible people and indeed on the one occasion when he and Grupler had come face to face the only thing that kept Dick from doing humanity a favor and shooting him down like a mad dog on the spot was the fact that they were both sitting in the crowded bar car of the Paris/Marseilles express.

Dick had needed to take a pee then, too. Grupler had made him as well, and they both had to sit there for hours, keeping a eye on one another. The seconds oozed by like beads of sweat as Dick nursed a cognac, his bladder feeling ripe to burst, but he didn’t dare go to the head. Not if he didn’t want to take a chance on getting drilled through the door while taking his piss.

His only consolation through this agonizing trip was that Grupler didn’t dare go to the WC either.

When they finally pulled into the station at Marseilles, Dick (with his hand in his jacket pocket gripping his Browning) had tried to follow Grupler but had lost him in the crowd. Being too wary to use the station’s rest room he had carried his suitcase to a nearby seedy café and there had finally voided his bladder into the reeking but quaint hole in the men’s room floor.

Shortly before Dick’s retirement from the service he had heard rumors that Grupler and Marlene’s multiple treacheries had finally been discovered by the East Germans; that they had gone underground; that they had offered their services to and been turned down by the CIA (whom they had already worked for and betrayed several times -- indeed they were suspected of the murder of at least one CIA officer, and of who knows how many other “assets”); that the Soviets had a $50,000 contract on their heads.

The last Dick had heard of Grupler and Marlene was that they had been chased out of London by the Kray gang and then had gotten themselves killed in Haiti after trying to pull a double deal on Duvalier.

They would keep turning up.

Dick had almost finished his insipid Marlboro when the toilet flushed loudly and decisively.

The slapping sounds of washing up, like a thirsty horse in a water trough, as the toilet bowl slowly refilled itself, whining rustily and moaning as if it was drawing its fresh water not without pain from some dark cistern deep beneath the surface of the desert.

Then the door opened and there stood Grupler still buttoning his heavy worsted trousers as the stench wafted out of the bathroom behind him.

“Commander Ridpath,” he smiled, showing those yellowed doglike teeth, “or should I say Mr. Smith, such a pleasure to meet you again.”

“Mister whatever will do just fine, Hans. I’m retired.”

“Ah yes.” Grupler took a soft leatherbound notebook out of the inside breast pocket of his tweed hunting jacket and thumbed through it.

“Actually my papers were dated 17th May.”

He removed a pencil from a holder in the book, made an erasure on the open page, blew away the rubber dust, licked the point of the pencil, wrote something, put the pencil back, and then closed the notebook with a precise little thwap.

(To tell the truth Dick had no idea when his papers had been dated.)

“I am so happy to make the acquaintance of your charming wife the former Miss Daphne F. MacNamara of the Rittenhouse Square, Philadelphia, Pennsylvania.”

He paused rather disgustingly with a wet little smile.

“You have done very well for yourself, Mr. Ridpath or should I say Mr. Smith. It is wonderful is it not to have someone to share one’s life through fat and thin.”

“Quite. Through the thick of the thin of it.”

“To the bitter end,” said Grupler.

He stepped aside, bowing, and Dick walked by sideways, not taking an eye off him.

Grupler seemed almost ready to follow Dick into the bathroom, but Dick closed the door.

Inside, he stood to one side of the door and waited until he heard Grupler’s footsteps receding.

Dick took one last drag of his cigarette and dropped it into the toilet.

Of course Hans had left the lid up.

And, yes, damn it to hell, there was a definite fresh smudge of shit-smear on the toilet seat.

Dick tore off some toilet paper, wet it under the faucet, then wiped off the seat. He dropped the paper into the toilet, ripped off another wad of paper, and gave the seat another good wipe with the dry paper.

He paused, wondering if Grupler had tiptoed back and was standing out there, listening.

He dropped the paper into the bowl and then washed his hands thoroughly with Ivory soap.

He dried his hands and only then did he unzip and take his pee, amidst that still-lingering shit stench, mixed with -- yes -- it could only be -- the cloying tang of Hai Karate cologne.

Fucking Grupler. Him and that whore Marlene.

Dick had not felt good about killing that motorcyclist the other night, and he knew that if he hadn’t been quite so ripped on that Owsley acid he could have probably easily stopped the guy with a simple pistol barrel smacked against his nose and a kick to the balls, whatever. There were other ways to stop a big fat giant with a monkey wrench besides shooting him in the eye.

No use crying over spilt milk, but still...

He had decided a long time ago he wanted nothing more to do with killing people.

But he had to admit that right now he really wouldn’t mind at all killing Grupler and that bitch Marlene, too, in the bargain.

People like that just had no respect for human life.

He’d run into his share of that sort in his career, and they weren’t always foreigners, either.

When you came right down to it, it was that cold-blooded sort who had caused Dick to retire early from the navy.

He just couldn’t stand people like that, and if Grupler was smart he’d watch his step.

But come to think of it, Grupler was smart. After all, he had fucked over plenty of the most dangerous people in the world, and here he was, still walking around, full of beans.

Dick finished and flushed, washed and dried his hands again.

He pulled the door open and with one eye peeked down the corridor.


(Click here for our next thrilling chapter. Kindly go to the right hand side of this page for links to other thrilling episodes of Larry Winchester’s A Town Called Disdain, as well as to appreciations of many of the fine motion pictures of this great American auteur.)
Posted by Dan Leo at 4:32:00 AM

How did Ronald Firbank get to read this before me?
But that's the magic of Disdain: time follows its own unalterable track, just differently. No wonder Firbank wanted it twice as long! (As long as what, though?)

"But he had to admit that right now he really wouldn’t mind at all killing Grupler and that bitch Marlene, too, in the bargain.

People like that just had no respect for human life."