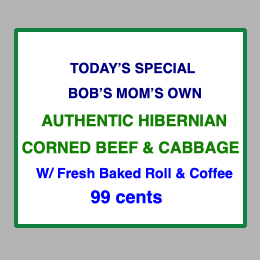 “Nobody knows the real me,” said Gilbey the Geek.

“Why would anyone want to know the real you?” said Angie the retired whore.

“I got wisdom,” said Gilbey.

“I know it don’t look like it, but I got wisdom,” said Gilbey.

“You got shit is what you got,” said Angie.

“It don’t hurt to be nice,” said Gilbey.

“I’m sorry, Gilbey. But sometimes the shit you say.”

They sat in silence for a minute, Angie drinking her Rheingold and Gilbey drinking his bock.

“Nobody knows the real me,” said Gilbey, again.

“I got dreams,” said Gilbey.

“What kind of dreams.”

“You got to promise not to make fun of me.”

“I can’t promise that, Gilbey.”

“All right, I’ll tell you anyway. My dreams is a world where I don’t never need no money, and where I can drink bock all day and not be hungover the next day.”

Angie looked at the dumb bum with his trusting dumb face.

“Can I ask you a question, Gilbey?”

“Were you always kind of retarded, like ever since you were a little kid?”

Gilbey cocked his head, and stared off into nothing out of the corners of his eyes. This meant he was thinking, or trying to think. Then he straightened out his head again and looked at Angie with his sad eyes like a puppy dog’s.

“Yeah, I guess I always been kind of retarded, Angie.”

“So it ain’t your fault,” said Angie.

“No, I guess not,” said Gilbey. “But you know something, Angie?”

Angie waited, but Gilbey didn’t say anything, so just to move things along she said, “What? What do I know, Gilbey?”

“Nobody knows the real me, Angie.”

Angie stared at him.

Bob came over. It was just another Monday afternoon in the bar. Outside the sun was shining, you could tell when somebody opened the door to come in, or, more rarely, to go out.

“You two okay?” said Bob. Their glasses were empty.

“I’ll take another one, Bob,” said Angie. “And give the wise man here another bock.”

Bob took their empties and went down to the taps.

“I ain’t that smart, but I got wisdom,” said Gilbey. “And I got dreams. It may not look like it, but I got a lot to offer, Angie.”

“Yeah,” said Gilbey. “Nobody knows the real me.”

{Please go here to read the “adult comix” version in A Flophouse Is Not a Home, illustrated by the illustrious rhoda penmarq…}
Posted by Dan Leo at 3:09:00 PM