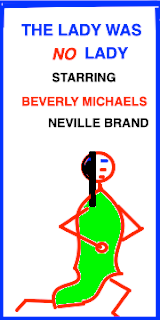 Every morning Addison checked the movie listings in the Federal-Democrat, and finally, after three weeks, he hit pay dirt: the Vauxhall up on 42nd Street was showing The Preacher Wore a Sixgun! He could barely contain himself, but he waited until a little before four o’clock before going around the corner to Bob’s.

He deliberately grabbed a stool next to where Tommy McCarthy usually sat, down near the rest rooms, and, sure enough, shortly after four, Tommy came in.

Tommy took out a cigar and removed the cellophane, and Addison fought the urge to give him a light. He knew by now that Tommy didn’t like people lighting his cigar for him. Bob came over and put a bock in front of Tommy.

“Un fucking believable,” said Tommy, and he put a kitchen match to his cigar.

“Half a minute into the second round,” said Bob. “Them people at the Garden should’ve asked for their money back.”

“Un fucking believable,” said Tommy again, and he tossed the match into an ashtray.

Addison had no idea what they were talking about, and so he discreetly kept quiet. He was trying to learn how to keep his mouth shut when he had nothing to say, but it was hard. It was very hard. He waited until Bob had brought Tommy his change. He had considered trying to buy Tommy’s bock, but he didn’t want to press his luck.

Tommy didn’t say this in a way that meant he wanted to know what Addison had to say, it was more as if he had been so absorbed by his thoughts that he hadn’t even heard what Addison had said.

“I said guess what,” said Addison.

“I checked the movie listings today, and, guess what, the Vauxhall up on 42nd is showing that Audie Murphy movie, The Preacher Wore a Sixgun.”

“Yes! Remember you asked me to tell you if I noticed that The Preacher Wore a Sixgun is showing again anywhere?”

“Look, I’ll show you the listing.” Addison had the Federal-Democrat all ready on the bar, open to the movie page and folded over, with the Vauxhall listing circled in purple ink. “Look, Tommy, see? It’s on a triple bill with The Lady Was No Lady with Beverly Michaels and Backstreets of Bangkok with Dan Duryea.”

“I ain’t seen them other two,” said Tommy.

“Would you like to go see the The Preacher Wore a Sixgun?”

“Well, I think the Vauxhall changes their bills twice a week, so if you wanted to catch The Preacher Wore a Sixgun you’d have to go sometime in the next few days.”

Tommy took a drink of his bock.

“Y’know, Tommy,” said Addison, casting caution to the winds, “if you wanted to try for a matinée tomorrow, maybe we could go see it together.”

Tommy turned and gave Addison one of those impenetrable looks of his.

Would this finally be the time when Tommy would send Addison flying backwards off his stool with one swipe of that enormous scarred-knuckled hand? But no, because after taking a deep drag of his cigar, Tommy spoke:

“I’m pretty busy this week. We got three freighters we gotta unload in the next three days, and if I ain’t on the docks them bums don’t do no work and they hijack half the cargo, especially when it’s Scotch whisky like what’s on one of these ships.”

Oh, well, Addison had tried. But what he could do, he could go see the movie himself, and then later he could talk to Tommy about it. That would really give them something in common.

But then Tommy spoke again.

“You mean of The Preacher Wore a Sixgun?”

“Yeah, when they showing it again?”

“You mean you want to go now?”

“Yeah. You want to come? It’s a good movie, Anderson.”

“I gotta make one little stop first, but if we leave now we got plenty of time.”

“Sure, whatever you say, Tommy.”

Ten minutes later Addison was sitting in Tommy’s big Studebaker, and Tommy parked the car on some dingy cobblestone street down by the East River.

Tommy got out of the car and went into a bar. The bar had a faded grey and red sign:

Sailor Sid’s
Cold Beer Crabs
It was a chilly day in early December, and down the street Addison could see the river. It was that hour the French call "l’heure bleue", but here everything was the color of dirty concrete and soot-stained brick. There was a popping sound from somewhere outside. Addison waited, and Tommy came out of the bar, opened the car door, and got back in behind the wheel.

He took a gun out of his coat pocket.

“Take it. Just stick it in your coat.”

“I said stick it in your pocket,” said Tommy.

Addison stuck the gun in his coat pocket.

“Not this time,” said Tommy, and he shifted the gear stick and pulled the big car out into the street.

(Kindly go here to read the “adult comix” version illustrated by the illustrious rhoda penmarq…}
Posted by Dan Leo at 10:52:00 AM