“A Town Called Disdain”, Episode Thirty-Two: Daphne and the rattlesnake 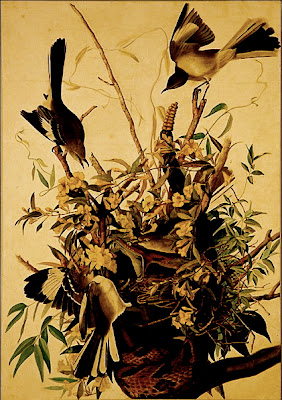 Previously in this sprawling masterwork by the legendary (“makes Norman Mailer look like Truman Capote” -- John Updike) Larry Winchester, our heroes -- the recently de-mobilized soldier Harvey and the glamorous strangers Dick and Daphne Ridpath -- survived through Harvey’s pluck and quick thinking a rather unpleasant encounter in the New Mexico desert with the now-deceased Thorndyke family.

However, as they ride back to Big Jake Johnstone’s ranch on this strangely grey day in September of 1969...

Finally Daphne saw a clump of the same kind of cute white flowers she’d lost in that quicksand thing and she swung down holding onto the edge of the saddle because the horn had gotten shot off and she had just pulled the clump up when she saw the snake looking at her and then it started to rattle and she knew it was a rattlesnake.

Without ever taking her eyes off of the snake, which was only about eighteen inches from her unshod but pink-stockinged right foot, she very slowly raised herself back up into the saddle and then very gently she passed the flowers from her right hand to her left and then with her right hand she reached down and turned the clasp of the hard leather sandwich case hanging from her saddle and she lifted the flap and felt the butt of the little revolver wedged in between the Saran-wrapped sandwich and the inside of the case and very slowly and gently she drew the gun out.

She had certainly seen enough cowboy movies where this was done.

But what if she missed.

It could make for one angry rattlesnake.

Should she just nudge the horse on?

She glanced back to Dick and Harvey.

They were absolute miles away.

The snake rattled again and showed its ugly tongue and hissed.

She looked again toward Dick and Harvey. They had both halted and they sat on their horses perfectly still, looking toward her and at the snake.

The hell with it.

She strethed out her arm, aimed the gun right between the snake’s eyes, and squeezed the trigger.

Dick and Harvey galloped over, and she was putting the gun back into the sandwich case.

Harvey swung down, went over and picked up the dead snake.

“Damn. Right between the eyes.”

Daphne brought her cigarettes out of her vest pocket.

“Cut his rattle off, soldier boy. I want a memento. My very first snake.”

Dick reached over and gave her a light with his Ronson.

(Click here for our next enthralling chapter. You will find links to other episodes of Larry Winchester’s A Town Called Disdain on the right hand side of this page. Remember, finals are approaching!)
Posted by Dan Leo at 4:32:00 AM

Do Daphne's non-human snakes imply that she has shot a few human serpents, except while not riding horseback? And perhaps not between the eyes?
Even I've seen that done in movies.

I wouldn't put anything past Daphne.

I also wouldn't want to get on her bad side.