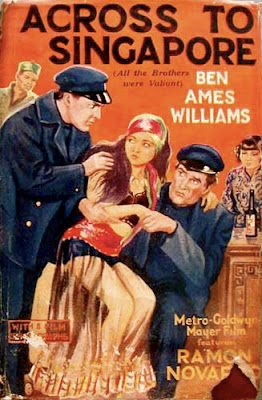 Our serialization of this great American epic by Larry Winchester, (now presented uncut for the first time) continues with another abrupt shift in voice, to that of the mysterious Dick Ridpath:

And what did I know? Only that Daphne’s little transistor had started to talk to me that night in Singapore at 4 AM.

“Commander Ridpath, please leave on the 9 AM United Airlines flight for San Francisco.”

Daphne snored gently through it all. I had been lying awake, smoking and reading Evelyn Waugh’s Sword of Honour. Unlike me she always sleeps like a rock.

I closed the book over my finger and looked at the little radio. Daphne sometimes liked to lie in bed with the radio on by her head, and I always turned it off after she fell asleep. I tried the dial, and sure enough it was off.

I’m sleeping, I thought. Or I have been sleeping.

And then the voice came on again.

“It will be very much to your benefit, Commander Ridpath. This morning, the 9 AM flight. We will talk to you further in San Francisco. Please book rooms at the Belvedere Hotel. Thank you and good night.”

I had often heard faint voices in my head -- didn’t everyone? -- and I’d gotten used to that, but this was different. This was real.

And I had no idea who or what it was. Was it one of my old supposed friends from Q Section having fun with me, trying out some new piece of equipment? It had to be someone from the old days; no one called me Commander any more. Hardly anyone had called me Commander when I was a commander. I could not place the voice at all. It was clear but somehow alien, with an accent I couldn’t place. It was like a combination of Afrikaner and Burmese, and for all I knew it was.

But, okay. What the hell. Let’s go to Frisco. Or try to go there, anyway. As good a destination as any, and God knew we had to get out of Singapore.


Against my advice Daphne had wanted to go into that hat shop in Saigon. Her mother’s boyfriend had assured her on the highest authority that the war would end that year, that Saigon would return to its pre-World War II glory, and that a high-tone millinery was “just the thing”.

Well of course the shop had been bombed the third week we were there, a time bomb set to go off at eleven AM, and the only reason we weren’t both killed was that we had been up all night playing baccarat, had slept until noon, and hadn’t even opened the shop.

Like the sushi restaurant scheme in Chicago which had fallen apart when we had taken out the Japanese backers during the Democratic Convention and the cops had beaten them up.

Or like that Desert Rat Girls movie Daphne and I wrote with that Larry Winchester guy and we were just about to start filming near Gaza when the Six Day War breaks out...

But after the hat shop blew up I met a Special Forces captain named Shackleton at the Lovely Bar who connected me to someone who needed a skipper to take a 60-foot yacht from Singapore to New York by way of the Canal.


Now I knew very little about yachts of any length, but I figured my good Annapolis training would come back to me. Besides, we were practically broke and the money offered was more than generous. It all sounded too good to be true, and this turned out to be the case.

When we went down to the dock in Singapore to see the boat (twenty minutes late for our appointment because Daphne had insisted on going back to the hotel for her sun hat) we found the yacht swarming with police. Needless to say we beat a hasty retreat, and we later found out that the boat had been impounded along with fifty-nine kilos of heroin.

Two police detectives came to our hotel (the Palm Grove) the day after and asked us about the yacht. I claimed complete ignorance of the whole affair; we were merely tourists, ha ha. The detectives left and didn’t return, but afterwards I had the feeling we were being watched.

The thing to do obviously was to get the hell out of the country quick, but at this point we were down to less than a hundred bucks. We decided to stay on at the hotel and put up a brave front while we tried to raise some money.


Daphne’s mother proved to be unreachable, on assignment in Biafra. My dad was drinking when I finally got him on the phone at the Union League and would only tell me that Daphne and I should ship out on a banana boat. My dad had money, but he had never forgiven me for retiring from the navy, and he didn’t like Daphne. And she didn’t like him. And, in fact, my father and I didn’t really like each other.

Daphne always let me handle our finances, much as they were handled at all, and I hadn’t let her know exactly how dire our straits were. If she had known she would have been quite likely to set about raising funds the easy way from the wealthy businessmen who craned their necks to stare at her at the swimming pool or in the cocktail lounge. She would have led them on and maybe let them paw her a bit, and then have asked for a “loan”, or perhaps she’d just beat them with a belt for a flat fee. All of this would be against my wishes of course, but I knew when I married her that Daphne does just exactly what she wants to do and that’s all there is to it.

It would have been nice if that voice from the radio had said something about tickets waiting for us at the UA desk, but it hadn’t.


Came the morning, rarely an energetic time for either of us, and I dragged Daphne out of the hotel after first dropping our luggage from a window and down into an orchid bed. Wearing our bathing suits so as not to arouse suspicion, we sneaked into the garden, pulled on shorts and shirts we had secreted in our towels, grabbed our suitcases, dashed out to the street, hailed a cab and told him the airport and step on it.

We passed through some sort of political demonstration or riot, people pounding on the cab. I handed the driver a wad of Singaporean one-dollar bills, just about the last of our kitty, and the guy sheared through the mob like a knife through warm butter.

Maybe for once we’d get out of a country before all hell broke loose.

I tried the United Airlines desk and sure enough there were no tickets in either my or Daphne’s name. Swell. I wondered what the penalty for bolting a two-week luxury hotel bill in Singapore was. Probably a thousand lashes and life imprisonment.

We went to the cocktail lounge and ordered drinks.

At the bar I saw an American naval captain smoking a pipe and drinking a martini. It was Huey Gregg, an old classmate from Annapolis. I got up and went over. He was reading a paperback, The Rare Coin Score by Richard Stark.

I pumped his hand frantically.

“Huey, please tell me you’re taking a military flight out of this joint.”

“Sure am, Dick. Got a flight at oh-nine-thirty hours. Need a lift?”

“I fucking love you.”

“Not that it matters,” I said, “but where’s the flight headed?”


(Click here to go to our next thrilling chapter. Check the right hand column of this page for links to other episodes of Larry Winchester’s A Town Called Disdain [now renewed for a second season!] as well as to appreciations of many of his classic films. And coming soon from Ha! Karate [Yokohama]: The Complete Larry Winchester, Vol. 2, a budget-priced DVD box set comprising Race to Rangoon, Hot Rod Hooligans, and The Joey Bishop Story, plus a special bonus disc of all six episodes of Larry’s 1962 TV series Heintz Factory Days. Includes voice-over commentaries from Larry, his longtime collaborator Tommy "Legs" Larkin, and the actors Carolyn Jones, Nehemiah Persoff, Edd "Kookie" Byrnes, and Richard Beymer, as well as the feature-length documentary Larry Winchester: Hollywood Renegade.)

High adventure 'round the world! Poor Daphne, though. How does a woman go on without her Saigon high tone hat fix?

Daphne will never be without at least one cool hat. That's just the kind of gal she is. Wasn't she wearing one of those cork safari helmets back in the first chapter?

One cool hat's not enough. I know Daphne, or at least I imagine I do. She needs a hat or two a day. And everyone know high tone Saigon millinary outclasses anything you can get anywhere in the Western hemisphere.
Larry & Co. left us hanging but as she's survived her deprivation this long, the worst of the crisis must have passed.

I pity any crisis that would be foolish enough to fool with a woman like Daphne.