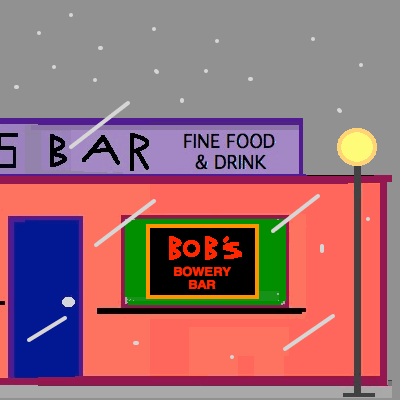 “Master,” said the apprentice monk, “what is the meaning of life?”

The ancient monk snapped a quick left jab to the apprentice monk’s nose, and the lad fell back onto his posterior.

Stanching the flow of blood with the sleeve of his robe the young apprentice said, “So that is the meaning of life, Master, a punch to the nose?”

He had bruised the knuckles of his left hand, so this time he gave the boy a stout right cross to the jaw.

It had taken Gerry “The Brain” Goldsmith all afternoon just to come up with those six sentences, but they were good ones, if he did say so himself. He left the sheet of paper in his trusty old Royal portable, so he would be all set to resume work on his “book of philosophical reflections” on Monday. But today was Friday, the beginning of the weekend, and even though Gerry had no “real” job (unless you could call writing his book a job), and indeed had never held a job in all his forty-seven years of life on this planet, he still considered it just and meet to give himself the weekend off from his literary “work”. He believed it was essential to rest his brain and let it lie fallow after five days in the trenches of reflection and creation. Time for a bock!

Gerry threw on his old camel’s hair chesterfield, wrapped his threadbare Andover rowing-team muffler around his neck, put on his twenty-seven-year-old Brooks Brothers fedora, left his little efficiency apartment, and went down the six flights to Bleecker Street.

Snow was falling yet again from the darkening sky. Gerry loved the gentle beauty of the snow, as long as he didn’t have to spend too much time in it, and fortunately his haunt Bob’s Bowery Bar was just right around the corner…

The place was packed, with those who had just got off work, and with those who didn’t work, and those like Gerry who “worked” but didn’t get paid for it.   God, how Gerry loved this place. A man – especially a literary man, a philosopher – needed a home away from home, especially when his home was a tiny one-room flat (formerly a storage closet) with a two-burner hot plate. As much as he enjoyed his work, a man needed to get out, to see people, to talk, and, yes, to drink!

But where to sit? Bob’s was usually crowded at this time on a Friday, but today it seemed even more mobbed than usual. All the tables were full, and men and women stood two and three deep at the long bar. Gerry would have loved to join his friends “the poets” (Hector Phillips Stone, the doomed romantic poet; Seamas McSeamas, the hearty Irish poet; Howard Paul Studebaker, the Western poet from Hackensack; Frank X Fagen, the nature poet who never left the Lower East Side; good old Scaramanga, the leftist poet who was always more than ready to let loose with a rousing song of the Spanish Civil War; and genial Lucius Pierrepont St. Clair III, the Negro poet) but the round table at which the poets usually sat was full to capacity. Of course Gerry could join those standing at the bar, but his old Harvard lacrosse knee injury had been acting up lately, and he found it difficult to stand for more than a few minutes. But wait! What did he spy through the fog of tobacco smoke but an actual empty stool down there at the far right of the bar! Quickly he headed for it before someone else could claim the real estate.

Gerry heaved himself up on the stool (he really must work on losing a few pounds, perhaps start doing the odd push-up and sit-up of a morning – he would start tomorrow!) and, breathing a sigh of relief, laid a crumpled dollar bill on the bar.

“And how was today’s assault on the pantheon, dear Gerard?”

Gerry flinched, and realized with horror why this end-seat was empty. Reluctantly he turned to his left and saw none other than the colossal bore everyone called Addison the Wit.

“Have you nudged Aristotle from his pride of place yet, dear boy?”

“Found out yet the meaning of so-called life in this vale of tears?”

Bob came over, took his cigar out of his mouth just long enough to say:

Usually Gerry paced himself with short glasses of Bob’s delicious basement-brewed house bock, but if he must sit next to Addison the Wit, there was nothing for it but…

“I think this evening I’ll start with the imperial pint of bock, please,” he said to Bob.

“Ah, the imperial pint,” rhapsodized Addison, “a fitting libation for the emperor of unpublished philosophers!”

Gerry flinched, again, and then quickly said, before Bob could head for the taps:

“Oh, and Bob, a shot of Cream of Kentucky too, please.”

“Ah,” said Addison, “the Cream of Kentucky, to loosen the tongue of the Wittgenstein of the beer stein, the bard of the Bowery –”

“Second thought, make that a double, Bob,” called Gerry to Bob, who was already drawing the imperial pint.


{Please click here to read the “adult comics” version of this story in A Flophouse Is Not a Home, illustrated by the amazing rhoda penmarq.}
Posted by Dan Leo at 5:11:00 PM