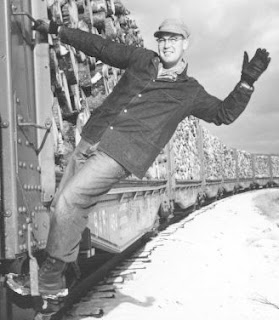 AKA "The Poet Laureate of Nedro Ave.", Arnold Schnabel, for many years a brakeman on the Reading Railroad, simultaneously pursued a career as a lyric poet. From 1938 until his sad death in 1969 he contributed a poem a week to The Olney Times, verses touching on "the ordinary life of ordinary people in an ordinary way". He lived most of his life in the tiny rowhome he was raised in, "bathed in the dour shadows of the mighty Heintz factory"; was an usher at St. Helena's Church, a member in good standing both of the Knights of Columbus and the Catholic Youth Organization. Arnold never married and was devoted to his mother, a pious widow who outlived him by a decade. Here is one of his most famous poems (rebroadcast by permission of the Arnold Schnabel Society):

In Fisher Park I heard a lark;
‘Twas the first or perhaps the second day of Spring.
I ceased my rambles and sat upon a mossy rock --
The better for to hear him (or her) sing.

The song he sang (or was it she?)
Drilled deeply into my unworthy soul:
“Cheep cheep!” sang he or she to me, most wretched me,
And, yes, I wept, and soon lost all control.

In Fisher Park I met a young lad
In Wintertime, with cheeks of rosy apple glow;
He showed me what I knew not I had:
An innocence buried ‘neath frozen snow.

In Fisher Park I met a young girl
In Summertime, and like a flower was she;
She put my crazéd brains into quite a whirl
But in the end showed peace to me.

In Fisher Park I met an ancient priest,
Mumbling his daily office (yes, ‘twas Fall);
He told me that of men I was the very least,
But that to Jesus this meant nothing at all.

In Fisher Park I heard a lark,
I met a lad, a girl, a wise old priest;
What did I learn in my ramblings through the glades of Fisher Park?
Only this: that God loves every man and beast.

(For links to many other Arnold Schnabel poems, and to his previously unpublished vast memoir Railroad Train to Heaven,* go to the right hand column of this page.)

*"Simultaneously one of the great works of Catholic and fallen Catholic literature. Holy and unholy, sacred and sacrilegious,  and a ripping good read." -- Bill Buckley
Posted by Dan Leo at 9:48:00 AM

a veritable cavalcade of delightful and parenthetical seasonal wonders, this poem evokes a je ne sais quois in the reader if they have even a jot of joie de vie.

How I've managed to live this long without stumbling across the delightful word stylings of Arnold is beyond me.

My life is now the richer. I will spread the word about Arnold. Does the Society sell coffee and/or tea cups?

Dear Jennifer, I'm afraid the Society does not yet sell cups or mugs, but I wouldn't put it past them in the future.