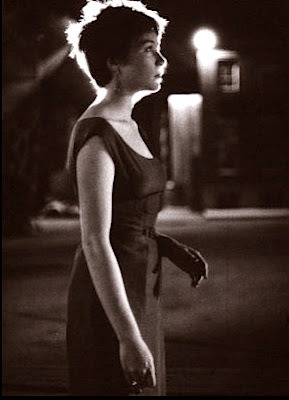 A man called Arnold Schnabel descends a staircase in a large Victorian house in Cape May New Jersey on an August night in 1963.

These are his memoirs, this is his life, this is our life...

I went past the third floor and successfully made it down to the second. There were two doorways on the front side of the hall. The door to the first was closed, but the second one was open. I walked over, and I could hear Elektra’s voice:

Before I could go in however, a woman appeared in the doorway. She had red hair, cut like Peter Pan’s.

As with the woman I had surprised in the bathroom just a short while ago, I felt that I had seen this woman before, or at least that I had imagined seeing her before, I didn’t know where or when.

“The bathroom,” she said.

Indeed this was the woman I had intruded upon as she sat on the toilet smoking a cigarette.

She stuck out a hand.

I shook her hand.

She held onto my hand.

She did look awfully familiar. I mean I seemed to know her from before the bathroom incident. She wore a pretty shiny green dress and she was very trim.

She stared at me, still holding onto my hand.

“Yes. It’s very slight, but I can see it. Around your head.”

“Sort of. It’s like your head is giving off this shimmering glow.”

With my free left hand I touched the top of my head. It felt normal enough.

“I can tell you’re a very spiritual person,” she said.

All I could think was, Great, this is all I need: a halo.

“Oh,” she said, and she seemed saddened.

She at last let go of my hand, but she continued to stand in the doorway, effectively blocking it. She seemed to be studying my eyes. I found this as disconcerting as when Daphne had done the same thing, and I looked over her head. The porch was out there. Someday I would reach it.

A harmonica had been playing but now Elektra’s voice was singing again:

The harmonica came back in.

“Your girlfriend has a lovely voice,” said Shirley. “And you have a very — radiant soul. I feel that you’ve been touched by God.”

“When I was holding your hand I felt like you could pull me along up into the sky, into the stars.”

“You mean I’m not advanced enough,” she said.

“Have you traveled through the stars, Arnold?”

Forget about traveling though the stars, I was having a hard enough time just making it out to that porch.

I met my love by the gas works wall

“But you’re probably in a hurry to get out to your girlfriend,” said Shirley.

“Then help me bring the beers up,” she said.

I was doomed. That porch was my promised land, my city of gold, and I would never reach it.

Next thing I knew Shirley had my hand in hers and she was leading me back to the
staircase.

I thought of dear old Olney, the Heintz factory behind our house, the great stacks belching black smoke, the rattle of the 47 trolley, the beer smell of the taverns, the sneakers swaying from the telephone wires, the butcher shop smells of sawdust and blood, the sugary warmth of the bakeries, the wooden darkness of the confessional box...

But then I got a grip on myself. I halted, but Shirley kept going, holding onto my hand, until both our arms were outstretched, with Shirley already on the second step down. She turned her head.

“Yes. She’ll be wondering where I am.”

“Somehow I doubt that,” I said.

“I’m not going to seduce you, Arnold.”

“I didn’t mean that,” I said. Not necessarily, anyway. “I just meant that something else would happen. That would prevent me from getting out to that porch.”

“I don’t know. Dean Martin will come in and want to hear my thoughts on Jesus and salvation.”

“I just meant that as an example.”

We were still holding hands at arm’s length while all this was going on, with Shirley on the second step of the stairway. We were like a poster for some dramatic movie.

She had been smiling, but now her face turned serious, and she looked into my eyes.

“You can see the future,” she said.

“No,” I said. “But I can do what I can to ward off the possibility of certain historical
trends.”

“You really do have a deep soul.”

She let go of my hand. Its palm was warm and sweaty.

“So,” she said. “A beer for you? Or would you prefer a cocktail? A cocktail! Would you like a Manhattan?”

I told her that would be very nice.

Shirley went down the stairs and I turned back.

I realized that Sammy was singing now, and had been singing:

(Click here to see if Arnold will catch that train. Kindly turn to the right hand side of this page for listings of links to other episodes of Arnold Schnabel’s Railroad Train to Heaven and to many of his easy-to-understand poems.)

And now a word from Mr. Howlin' Wolf:

Hey pallie Dan, what an unique Dinoreference...but you just never know where our Dino will turn up next...never was, never will be anyone as cool as the King of Cool..oh, to return to the days when Dino walked the earth...

One wonder after another!

Stay tuned, Dino, because the way things are going with this party I wouldn't be surprised if Dean has some "pages" as we say out in Hollywood.

Succinctly put, Kathleen. Somehow we knew that Arnold wouldn't be able just to go to a cookout like anyone else, have a burger and a beer or a Coke and call it a night. Not our Arnold.

Hey pallie Dan, dude, will be Dinotuned in man!

Oh dear... Arnold's never left the bin, has he!?! His memoirs are nothing more than the made up recollections of a madman. All work and no play...

Now the trick is to stay out of the bin.