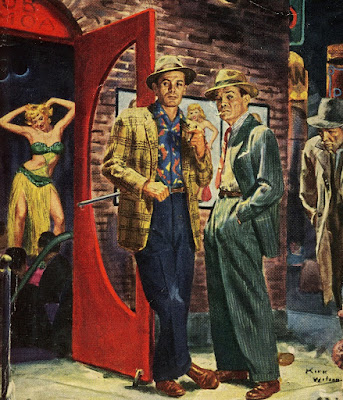 We last saw our hero Arnold Schnabel on a rainy night in August of 1957, sitting in a booth in Bob’s Bowery Bar with his companions Josh (the sometime son of God), Mr. Philpot (that preternatural bookseller), Horace P. Sternwall (the sadly unheralded author), Ferdinand (the talking fly), and Big Ben Blagwell (that nautical adventurer) who had just begun to read aloud the opening sentences of Horace’s novel of despair and terror, The Ace of Death…

(Please click here to read our previous thrilling episode; anyone looking for a cracking good long read over the summer months may go here to return to the very first chapter of this Gold View Award™-winning 64-volume memoir.)

“Even the most casual reader of Arnold Schnabel’s towering chef-d'œuvre must inevitably wonder: ‘Is all this meant to be real?’ To which question I must reply, just as inevitably: ‘Yes, it is not only meant to be real, but it is real, as real as the life we live and as real as the dreams we dream.’” – Harold Bloom, in The Psychology Today Literary Supplement.

“Give them one last chance?” I suggested.

“Funny like a jitterbug contest in a polio ward,” said the Bear.

It was happening again. All I wanted to do was to get back to my own world, my own body, my own life, and here I was in what looked like some dark alleyway with three menacing goons.

The one called the Toad was short and fat, and he had a knife in his hand and a cloth cap on his head.

The guy called Rat really did look like a Rat, thin and sharp faced, with a thin moustache and a grey fedora. He had a leather sap in one hand, and he was stroking it with the long bony fingers of his other hand.

The Bear, not surprisingly, was a big tall beefy guy, and he didn’t have a weapon in his hands, but then I guess he didn’t especially need one. He was punching his right fist into the palm of his left hand, slowly, like one punch every two seconds. His fist was as big as a softball, except it didn’t look soft. He wasn’t wearing a hat, and he had a buzz cut.

The Toad stuck the tip of his knife up against the underside of my chin.

“I could make it real quick,” he said. “One quick shove, up into your brainpan. How would you like that?”

“Is it a choice between slow and quick?” I said.

“Comedian,” said the Toad, and he pressed the knife into the flesh right above my Adam’s apple. It hurt, and I felt blood trickling down the front of my neck.

“Ow,” I said, and my head flinched backwards, and hit what felt like a brick wall.

“Funny man,” said the Rat, and he swung the sap and hit me on the elbow with it, and that really hurt.

He raised his fist.

“I take it I owe you fellows some money,” I said.

“Possibly,” I said. “You see, I seem to have been transported into some unknown fictional universe, and I really have no idea what’s going on.”

“I think I’ll just stick him,” said the Toad.

“Wait,” I said. “If I may just say something before you stick me. If you’ll just tell me who it is I owe money to, and how much, then I promise I’ll do everything possible to, to acquire the money, and –”

“He really is nuts,” said the Bear.

“You pretending to be nuts?” said the Toad, and he held the tip of his knife to my throat again.

“You would say that, wouldn’t you?” said the Toad.

“He would say that, too,” said the Rat, and he raised his blackjack in a threatening way.

“So you’re saying you are nuts,” said the Bear.

“You’re saying what –” said the Toad, and he lowered his knife, but only in a tentative way – "you got amnesia?"

“No,” I said. “Amnesia means you’ve forgotten everything. But I never knew anything in the first place, which is what I’ve been trying to tell you, uh, gentlemen.”

“You’re saying you don’t know nothing,” said the Rat.

“Maybe you did know and you forgot you knew,” said the Bear. “You ever think of that?”

“Maybe you ought to think about it,” said the Bear.

“Classic amnesia case,” said the Rat. “He don’t even remember that he don’t remember nothing.”

“Unless he’s faking it,” said the Toad. “You faking it, pisher?”

“Yeah,” said the Rat. “What if you’re lying between them pearly white teeth?”

“Maybe if I knock them pearly white teeth out of his head he’ll tell us if he’s lying,” said the Bear.

“I’ll tell you now,” I said. “I’m not lying. Please, look, why don’t you take me to your, uh, employer and maybe I can straighten this whole thing out with him.”

“I say he’s lying,” said the Bear. “Let’s show him what we do to lying two bit asshole welshers.”

He raised his great fist again.

“But wait,” I said. “Doesn’t your employer want a chance to get his or her money back?”

“You saying you got the money, goniff?” said the Toad.

“You know damn well how much, welsher,” said the Toad.

“I say we fix him so he never tells another joke again,” said the Rat.

“He wasn’t that funny anyway,” said the Bear. “Let’s tear him apart and dance the black bottom all over the pieces.”

“Listen,” I said. “All I can say is there’s been some terrible mistake, and I have no idea what you guys are talking about and how I’m supposed to owe you –”

“You heard the man,” said the Rat.

“But,” – one thing this universe had in common with the last universe I had been in, it was very hot and humid, and I was dripping with sweat – “but, wait," I said, "I’m telling you guys I know nothing about any of this, who Fat Flo is, the ten thousand, why I owe it to her –”

“You know why, welsher,” said the Bear.

“You shouldn’t’ve bet on the ace,” said the Bear.

“Shoulda bet on the deuce,” said the Toad.

“Okay,” I said, “I still have no idea what you’re talking about. I don’t even play cards.”

“I’m gonna enjoy this,” said the Bear, and he punched his fist into his palm again. “I am really gonna enjoy it.”

“Me too,” said the Toad, and he made a circular motion with his knife.

“This is gonna be fun,” said the Rat, and he raised his sap.

“Yeah,” said the Toad, “and if we don’t kill you we still don’t get the ten grand. So we might as well kill you and at least get that satisfaction.”

“You mean you got the ten Gs?” said the Toad.

“Yes,” I said, although I knew no such thing. “Now that I think about it I think I’ve got at least that much on me, yes.”

“What the hell,” said the Rat.

“Yeah, what the hell,” said the Bear.

“Why didn’t you just give us the ten Gs in the first place if you got it,” said the Toad.

“I know how it is when you’re a two-bit punk welshing asshole,” said the Toad.

“What an asshole,” said the Toad.

I put my hand in my jacket pocket, hoping for the best. Luckily for me that snubnose  revolver that that woman Lily had given to me several universes ago was still in there and I brought it out and stuck it in the Toad’s face since he was the one closest to me.


(Continued here, as our editorial team transcribes yet another few pages of Arnold’s holograph, with only the most egregious misspellings and chirographical errors silently corrected.)

(Illustration by Kirk Wilson. Please look down the right hand column of this website to find a purportedly current listing of links to all other officially-released chapters of Arnold Schnabel’s Railroad Train to Heaven©. Click here to order our esteemed colleague rhoda penmarq’s new glossy paperback edition of  lover, and other poems by horace p sternwall – “good old-fashioned poems, the kind they don't write any more”!)

Did Horace write any screenplays? Certainly, some of his novel must have been made into movies. Imagine what the Coen brothers would do with this.

I'm not sure that Horace wrote any screenplays, but I hope the Coen brothers discover his works!