Those not so Pretty Things 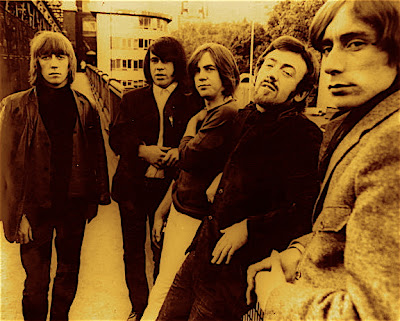 If you ask your average film geek what was the first psychedelic movie, chances are good they’re going to say, “The Trip of course, 1967, Roger Corman. Written by Jack Nicholson. With Peter Fonda, Bruce Dern, Dennis Hopper.” Well, not to put too fine a point on it: “Wrong.”

The first psychedelic film was Larry Winchester’s Rave-Up at Roderick’s, and here’s Larry in his memoir I’ll Take the Low Road, telling us how it all went down:

“I’m doing post sync on The Boxing Milkmaid at the Abbey Road studios with our sound engineer Geoff Emerick, and who walks in one day but my old pal Legs Larkin.

“Nah, later, man. How much longer you gonna be?”

“Give us another hour, Legs.”

So an hour later I leave it to Geoff and go down to the Crown & Anchor and Legs has got this big grin on his face, sittin’ there over a pint of Guinness.

“So what’s up, Legs?” I motioned to the barman to set me and Legs up with two more of the same.

“This, daddy-o.” He holds out the open palm of his hand and he’s got this sugar cube in it.

“Hey, great, thanks, Legs, a fucking sugar cube. You’re too good to me.”

Well, all I knew was that Cary Grant had supposedly taken this shit. I figured if Cary had tried it, it couldn’t be too bad. So what the hell, I popped it in my gob and washed it down with a mouthful of Guinness. Imagine my surprise when a half hour later Legs’s head has started to give off a golden radiation, and when he speaks I can feel the words in my fingertips. Also, I was no longer sitting on the barstool but floating three inches above it.

“Well,” I say, “Hammer wants me to do another teen rock ‘n’roll movie with Helen Shapiro. Something with music and a love story. They’ve showed me a couple of scripts but they stink. You got any ideas?”

“Sure. Helen’s this nice young girl, right? Wants to be a singer, right?”

“She meets this cat, he’s in the music biz, promoter, singer, whatever.”

“It’s somebody who likes to take LSD, like we are now.”

“So he gets her to take acid. And it like opens up her mind to the fuckin' multifarious mysteries of the universe and shit.”

“Right; that’s really fucking dramatic, Legs. They're gonna be lining up around the block for this motherfucker.”

“Hey, we’ll work out the details. All you gotta think about is building it all up to this wild scene where everybody’s tripping on the acid. Like look around you, man.”

I looked around. All the patrons of the pub were giants. And then I’d blink and they’d all become elves. Or barnyard animals.

“All right, Legs, let me think about it. I gotta pee.”

It took me about a year to make it to the john, and then when I did and finally took my johnson out it was five yards long. Maybe this LSD wasn’t such a bad idea after all. Anyway I peed out about ten gallons of technicolor-rainbow pee, and by the time I was finished I pretty much had the three acts of the movie worked out in the enormous swirling funhouse that my brain had become.

Helen Shapiro told Larry flat out that she didn’t think she should play a girl who took drugs, so Larry and Legs simply rewrote the third act in an afternoon to take that part out, and shooting for what was now entitled Rave-Up at Roderick's started not very long after, in September of 1965.

We wanted to get the Beatles, the Rolling Stones, the Kinks and the Who for the movie. None of them panned out so we settled for Ian Whitcomb, the Pretty Things, Unit 4+2 and the Small Faces. Loved those Pretty Things boys. Rags and I thought we knew how to party, but these guys were dangerous. Good band, too. And lucky for us they actually had a song called “LSD”.

Unfortunately for Larry the Queen’s Councillor shut this film down two days after it opened. It has not played anywhere ever again since. But Larry screened it for me one night at his place on Ivar Avenue and I want to tell you, Rave-Up at Roderick's totally rocks. The "freak-out" scene at the Marquee club (with the Pretty Things jamming with unbilled guest artists Itzhak Perlman and Ravi Shankar) is worth the price of admission all by itself. It’s up to you, all you Winchester fans out there: if you want to see this film re-released start bombarding the movie studios with letters and e-mails today.

You have nothing to lose but your sanity.
(Check out the right hand side of this page for a listing of more of the "Films of Larry Winchester". You might also enjoy our serialization of the "director's cut" of Larry's long-lost novel A Town Called Disdain, available exclusively on this site.)

Dan, I suggest you call in a couple a favors to some friends of yours, Rush Limpbaughs and ann Cuarter come to mind. Let's get the show on the road and get these Larry Winchester and Rags Larkin the recognition they deserve.

I keep waiting and waiting for Rush and Ann to return my phonecalls and e-mails. You'd think they'd deign to help a brother out. And they call themselves Americans.

Yeah Dan, I think their comminists, just trying to get the small people all riled up over nothin.

You just keep the candle lit for these great lost characters of Hollywood and don't let these trotskiytes get you down.