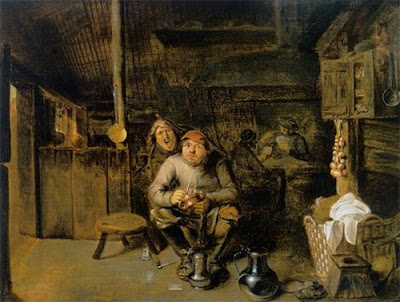 (Please click here to read our immediately preceding episode; if you are curious as to what led up to all this you may go here to return to the very first chapter of this Gold View Award™-winning 68-volume autobiography.)

“A full-hearted immersion in Arnold Schnabel’s sprawling and massive chef-d'œuvre may lead us to question not only the author’s sanity but indeed our own.” – Harold Bloom, in The Woman’s Home Companion Literary Supplement.


While I pondered Wiggly’s question, a question to which of course there could only be one answer, I noticed the bottle of Tree Frog ale on the coffee table before me – I had been so preoccupied with talking nonsense and smoking the reefer that I had somehow forgotten to drink, and so I raised the bottle to my lips and remedied this oversight, for some reason or reasons not lowering the bottle until it was empty.

“Wow, man,” said Wiggly, “you must have had a powerful thirst.”

“Not thirst so much,” I said, after thinking his statement over for half a minute as the ale did its work on my inner machinery, “but a desire for relief, even if only temporary.”

“Because of those dudes down in the alleyway.”

“They’re the least of my problems,” I said.

“Not if they find you and kill you, man.”

I paused, as I often do when an idea is slowly taking shape in my brain, like an egg slowly growing limbs and a head and even a brain of its own inside that head.

Wiggly was patient, and while I was pausing he lifted his own bottle of Tree Frog, and also emptied what was left in it at one go. Then he poured me another healthy shot of the mezcal, as well as another for himself. I picked up my glass, Wiggly picked up his, and we both drank our shots down without ceremony. This new infusion of alcohol was all my brain needed to suddenly produce the following sentence:

“If I’m a fictional character and those guys kill me, maybe I won’t really die,” I said. “Because this whole world and everything in it, including me, is not real.”

“Dig it,” said Wiggly. He picked up the packet of cigarette papers he had used to roll the reefer we had just smoked, Tops papers they were. “I mean, like, who knows, man?”

“Right,” I said. “Who knows? Maybe at the moment of supposed death I’ll find myself back in my own world.”

“That’s very possible,” said Wiggly. He detached a sheet from the packet of Tops, licked its gummed edge, and laid it on the coffee table top. “I mean, like,” he said, “uh, whatever –”

He detached another cigarette paper, and carefully attached its ungummed edge to the wet gummed edge of the first sheet.

“Won’t what, buddy?”, he said, tearing off a third sheet of cigarette paper.

I was getting the impression he was only barely paying attention to what I was saying, but, again, who was I to be critical, I did the same thing all the time.

“Maybe,” I said, “I won’t wind up back in my own world. My reality. My version of reality. Maybe I’ll just die.”

Wiggly had wet the gummed edge of the third piece of cigarette paper, and had attached it sidewise to the first two. He tore off a fourth piece and wet it and then rather abruptly spoke:

“And if your own world is fictional too, well, then, hey man, like, look out! You dig?”

He attached the fourth paper to the previous three, and then tore out yet another sheet.

He licked and attached the fifth piece of paper to the four others.

“Some people seem to know what to do,” I ventured to say.

He tore off a sixth piece of paper, and then finally put the packet of Tops down. He licked the paper.

“Only the holy men know, man.”

“Yeah.” He added the sixth and final sheet to its fellows on the table, making one rectangular sheet the size of a postcard. “Oh, and like the peasants, man. Working the fields and shit. They know.”

“Yes, man. The noble fellaheen of the singing earth, man.”

Now he was picking clumps of marijuana out of the carved metal box, and crumbling it onto the papers on the table.

“That always seemed like a hard life to me,” I said. “Being a peasant I mean.”

“Y’know,” said Wiggly, he paused in his work and looked up at me, “it probably is, man, it probably, like, is. Maybe the peasants don’t know after all. But you agree with me about the holy men at least, right?”

He was rolling the marijuana and the papers into a reefer now, an especially big one.

“Excuse me,” I said, “but what are we talking about exactly?”

“About whether the holy men know what it’s all about.”

“Well,” I said, and I could almost hear the clanking of the gears in my head, “if only holy men know, then that means that I can’t know, because I’m not a holy man. So there’s no way I can even know if holy men know.”

“Anyway, aren’t there all sorts of holy men? And don’t they all say different things? They can’t all be right, can they?”

“Because you’re not a holy man.”

“Not that you know of,” said Wiggly.

The reefer was rolled now, big, long and fat, and Wiggly ran his tongue along the length of it.

“Arnold.” With his dexterous slender fingers he was gently smoothing the bumps in that enormous reefer. “I don’t blame you, Arnold. I would be scared, too. And, like, hey, if you really are the like hero of this novel we’re in, then like what happens to me? Like if you get killed does the novel just end and then I end, too? Man?”

“I wish I could answer that in a way that would not be frightening to you, Wiggly,” I said.

“But, Wiggly, doesn’t it bother you to know that you’re just the creation of some writer?”

Wiggly politely proffered me the reefer.

“Come on –” he paused, still holding out that reefer the size of a Dutch Masters cigarillo, then suddenly he almost shouted: “Arnold!”

“I think I’ve had too much already,” I said.

“Why? You got someplace you got to be?”

I don’t know why, but I took the reefer, and the smiling Wiggly Jones gave me a light with the smiling Buddha lighter.

I sucked it in, that warm thick smoke, and then, Wiggly style, I sucked a couple more good draws in without inhaling, and then I handed the reefer back to Wiggly.

“What,” he said, “and, look, man, I’m just speculating here. What if everything is the real world – like everything, man – like right here, and this other dimension you come from –”

I exhaled a cloud of smoke that all but obscured Wiggly from my sight, and said, “Dimensions.”

“I’ve been in several dimensions or worlds, whatever you want to call them,” I said. “More than several.”

“So like what if all these dimensions are real, man?”

“Pathetic. The both of you,” said the Buddha.

“’But, like, wow, man,’” repeated the Buddha, and then he addressed me. “And what have you got to say for yourself, bright boy?”

(Continued here, and onward, until every last one of those black-and-white marble copybooks filled with Arnold’s surprisingly neat handwriting has been transcribed.)

(Kindly cast an eye down the right hand column of this page to find a soi-disant up-to-date listing of links to all other legally-released chapters of Arnold Schnabel’s Railroad Train to Heaven©. Please click here to order the new fully-illustrated  paperback edition of our friend rhoda penmarq’s poems for everyone, by wiggly jones, "the little hippie boy"– on sale now for a risibly reasonable $2.13 plus shipping!)